Why would cuttings from the same hibiscus exhibit different growing behaviors?

Last fall, we planted six cuttings from a friend's hibiscus syriacus. They were leafy, and sized from about 7" to 12". They're pictured in this question. Though they lost all foliage, the stems held up nicely through the winter. I'm in Massachusetts, USA, and we usually get down to -5°F or -10°F in the winter. This year was unusually warm, and stayed mostly above 0°F, if that matters.

Over these last few months (June, July, August) we've been experienced severe drought conditions, but we've been babying our little saplings, and they're growing nicely.

Five are leafing out, especially at the base, and not budding. They're each about 16" high and 12" at the widest point. However, one is much taller, about 40", but is pretty much a single stalk, and has 8 buds. (I couldn't get a good picture, but in some I can see the purple flowers beginning to unfold.) The taller plant is gently tied to a stake in a number of areas. It has a protective screen like the others, but I removed it to get a better picture.

The plants are spread out around the yard, and each gets about 8 hours of sun a day, from about 9 am to 5 pm. (The taller has begun getting an hour or so less sun as we're heading into the fall.) We water them equally. We don't amend our soil or treat it with anything. We put fallen leaves around all the stems last fall, but haven't used any real mulch.

The bushier are in dirt that has only ever grown grasses, clover, dandelions. The tall one is in a section that up until last year was completely covered in a juniper ground cover, including everything you see, all the way to the big rock. We had to dig at least 8" down to get all the roots, and then we aerated that soil. So even though we didn't add anything when we planted the hibiscus, the consistency was definitely looser. It makes sense that the soil in that spot might be more conducive to growth. In fact, I would think that a looser dirt and wider area might create a bigger, rounder, plant, but that isn't what's happening.

Is it that five are busy growing leaves, while the other is using its energy to produce flowers? If that is the case, though, is there are a reason it would be that specific one?

I've posted a picture of the skinny one and an example of the others. Click on them to get a closer look. 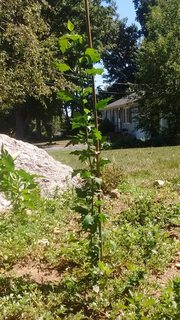 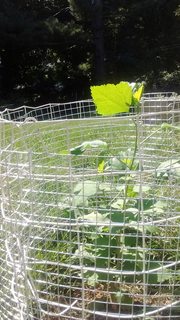 I can't think of a reason why that one would be growing with a single stem, but you're right in that the others are busy producing new stems and this one has chosen to flower instead, which is where its putting its energy. Hibiscus don't initiate flowering in the previous year, they flower on new growth when they're ready, so its not that that particular cutting was already 'programmed' to flower. The fact this one is planted in soil that had recently been opened up and cultivated might simply mean its not much of an effort for the plant to grow good roots, so there's plenty of energy left over for flowering, but I'm only theorizing.

This, though, is a great opportunity to create a 'standard' form of Hibiscus, something that's very expensive to buy - I'd have a go at persuading it to retain a single main stem till it gets to a particular height, then prune and train so you end up with growth on top which flowers, though you may not like this idea!

Not the answer you're looking for? Browse other questions tagged shrubs growth cuttings hibiscus or ask your own question.

5
Can I transplant young Rose of Sharon plants in July in Zone 6a?
6
Can I allow a pine tree to share root space with a group of birch trees? If not, which should I cut down?

4
Can I make my Jade plant grow faster?
8
Ginger plant too tall for its own good
3
Do petunias have roots in the stems?
6
Spider plant leaves becoming discolored, thin and droopy
4
One hibiscus plant is experiencing delayed leafing
4
How do I remove one of two different plants growing in the same spot?
4
Hibiscus problems
0
Hibiscus started drying suddenly
3
Elder (Sambucus nigra) losing leaves
2
How Can I Get Seeds of Swamp Rose Mallow (Hibiscus moscheutos) to Germinate and Establish?