I purchased a Chlorophytum Comosum in October 2016. It's 3 or 4 separate plants. I moved it from its 10cm diameter plastic pot into one that's roughly 15 cm and about 20 cm deep, without drainage. When moving it, I just took all of the soil and the plant from the original pot and placed it into a hole that I dug in the new one.

I usually water this plant once every 10 days. The dirt is usually dry on the surface but still damp underneath. At the bottom of the pot I used 3 small plastic pots to act as a platform for the plant and let water fall through to the bottom, so that it wouldn't gather around the roots.

The healthiest of the plants has started putting out spiderettes that are growing fairly large, and it has increased in size since I purchased it.

All of the plants are growing fast, and recently some of the leaves have grown thin and droopy, and I just noticed that they're very discolored, and pale. A few of the leaves have become unable to support themselves and are bending.

The same issue is affecting a small spiderette that I just repotted from a completely different plant, and I have been watering a few times a week to keep the soil damp.

What's wrong with this plant? How can I help the plant recover its original robustness and grow thicker, non-pale leaves?

This is how the plant looks today. It was watered about 5 days ago. It looks very droopy and out of shape: 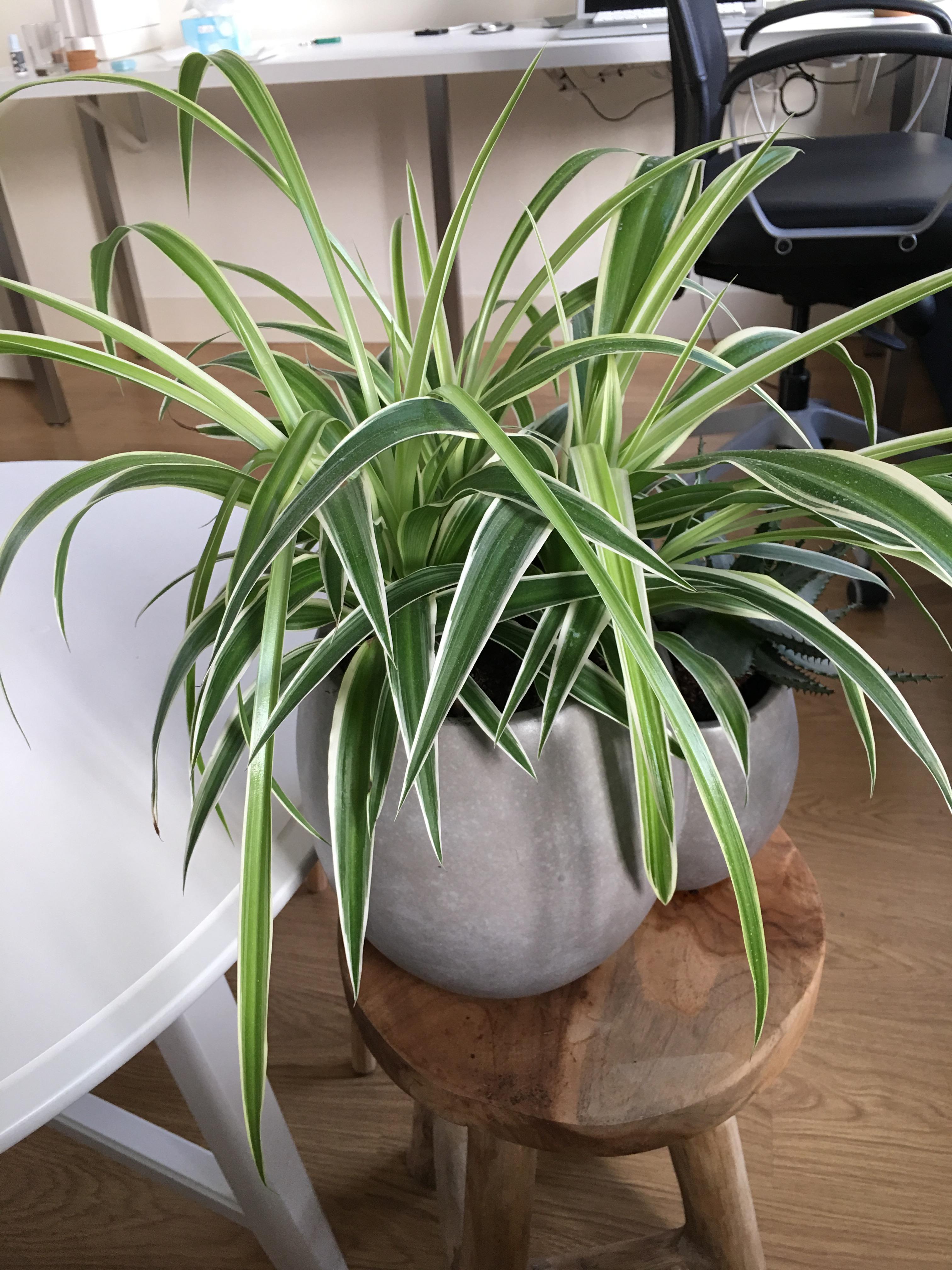 Detail on the discoloration I mentioned: 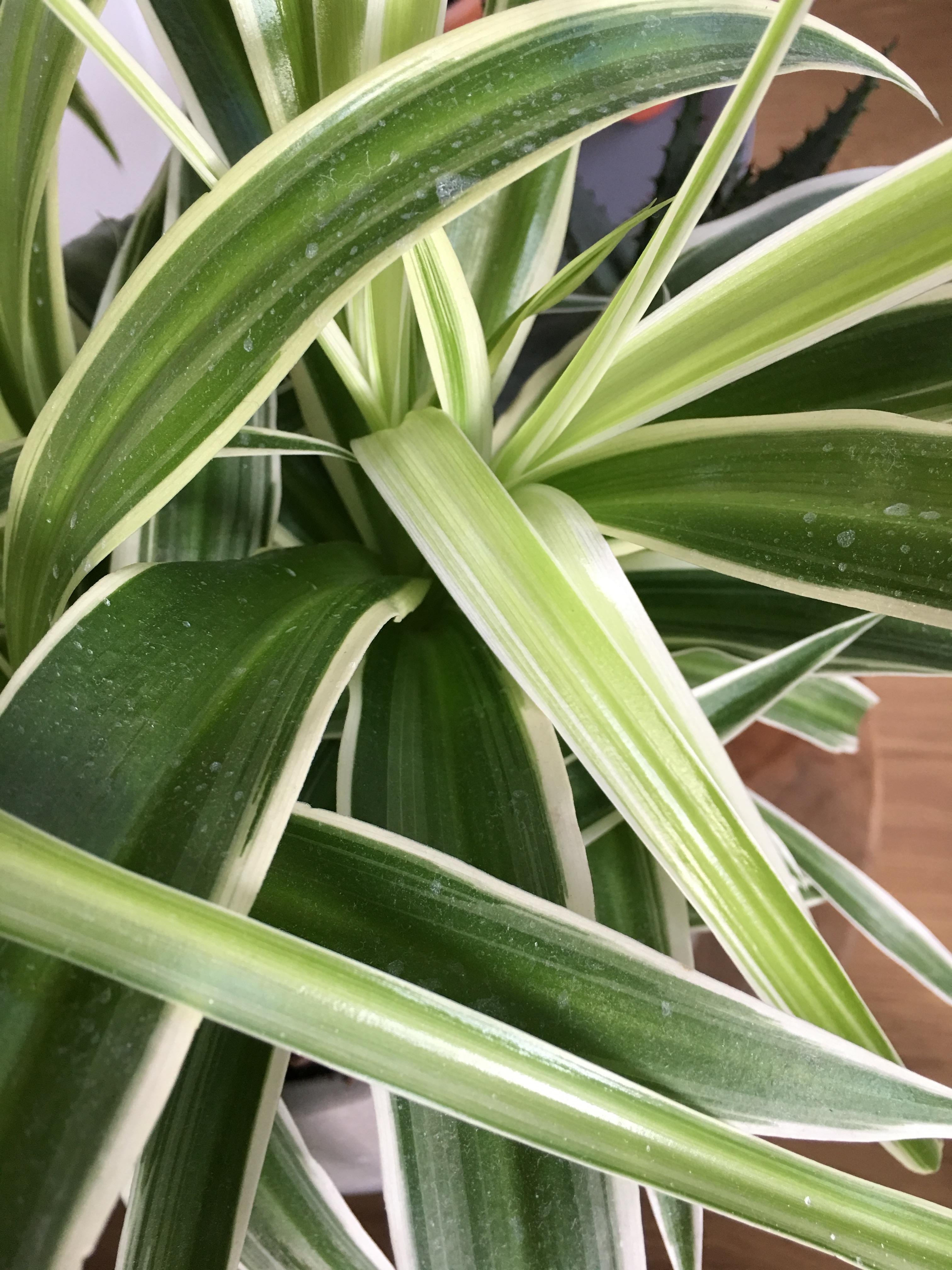 This is what the plant looked like about a month ago. The plant had grown noticeably during this time. 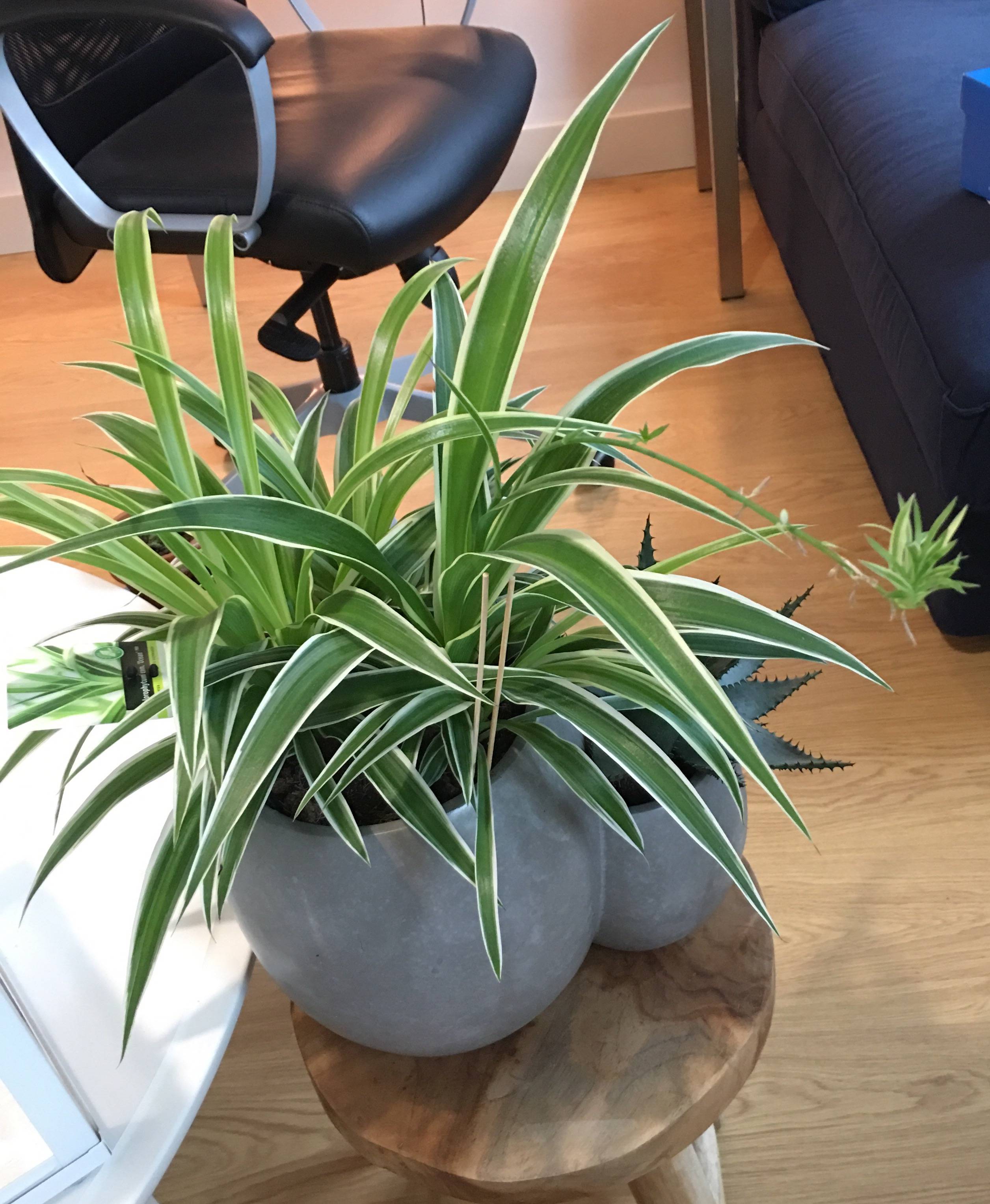 Here's another picture showing what the plant looks like when it's in best shape: 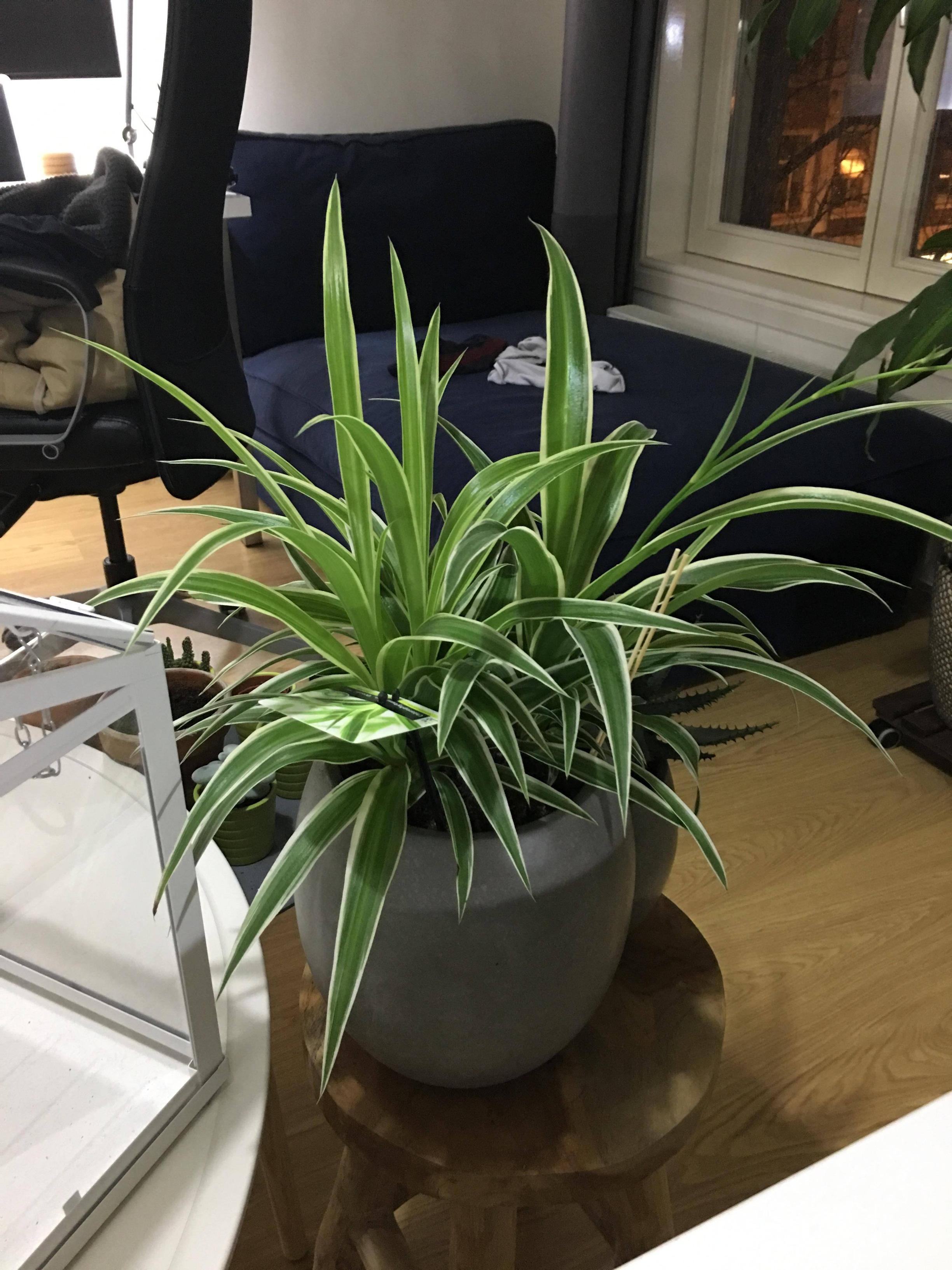 Here is a picture of the other spiderette taken from a separate plant, right after it was potted: 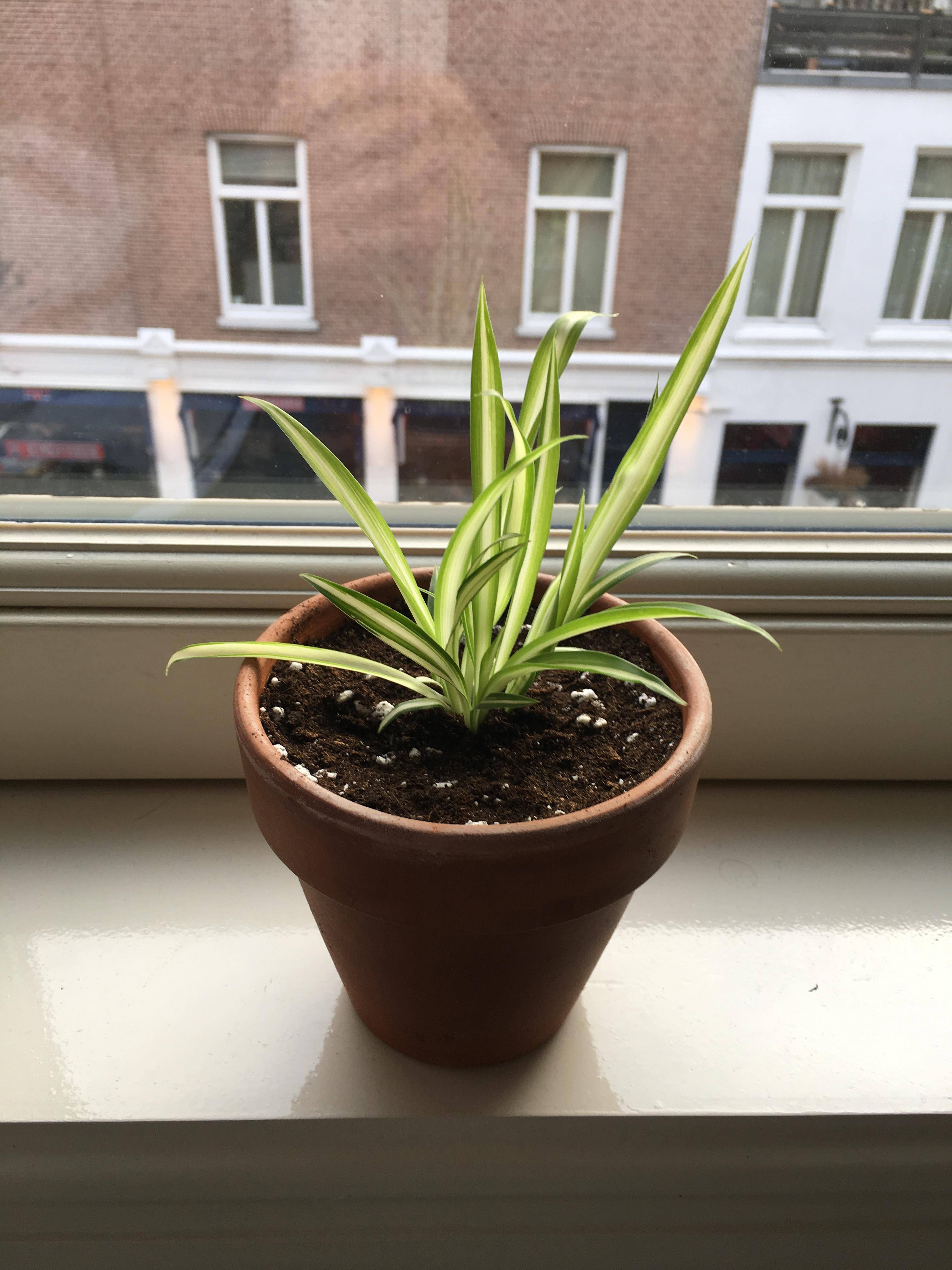 This is how it looked today (visibly more pale than before): 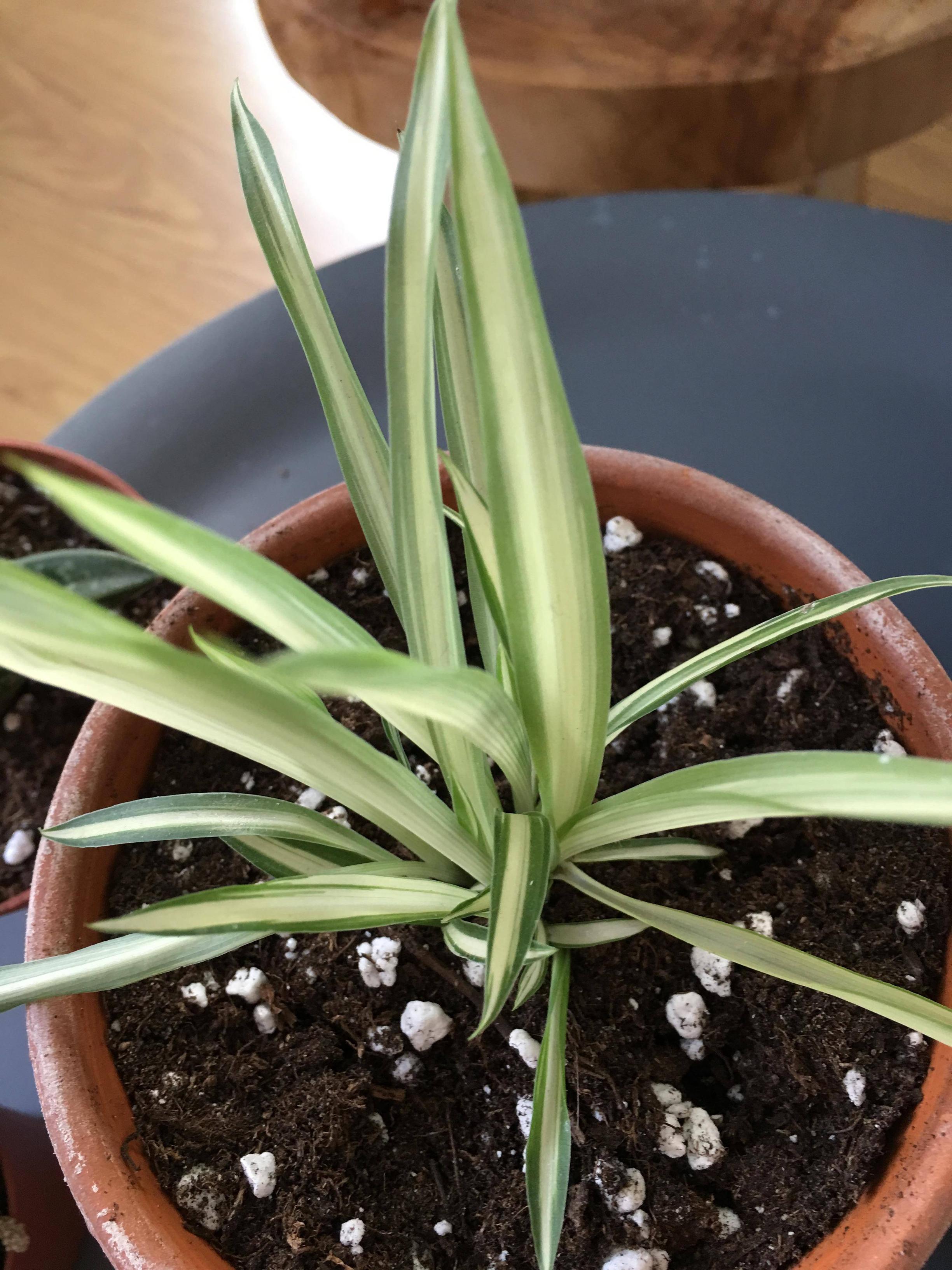 Sorry, I am not seeing a plant with problems. Perhaps a little stress from transplanting and/or being moved from a source of higher light to lower light. You are using potting soil and your watering sounds and looks just fine. Beautiful spider plant! The leaves as they age will bend more than new growth. The color is rich and healthy. You do not need to MIST. That does nothing to raise the humidity. The spots on the leaves are the dried remains of your tap water, the salts they add to city tap water (chlorine and fluorine primarily) or if you are using well water your water must be very mineral laden/hard. Looks like salts from city tap water though. Also to be seen on the rim of your clay pot. Eventually you'll see this white residue on the sides of your pot and on the surface of your soil. I'd buy bottled water, distilled water and not use tap water for your plants (nor to drink for yourself). Your transplant is a bit paler but you haven't said what you are using for fertilizer. I'd get OSMOCOTE 14-14-14 that you would use twice PER YEAR or even just once. I think that would perk and color your new transplants just fine. Truly, only in the stores these plants look this good as they enjoyed the warmth, light and ventilated air...and were fertilized. Now they are in less of a desired environment and possibly no fertilizer. They've been running on the fertilizer in the soil they came with. Let me know if I've assumed incorrectly. Great pics, beautiful plants. Wait a minute, did you say those beautiful pots have no drainage holes? I know the clay does...explain about the pot thing again. In no universe will plants survive without drain holes. Spider plants are tough and tougher and toughest but you have to have drain holes. Explain more clearly. Your question is one of the best I've seen to include your pictures. But...maybe I need more help!!

As Colin Beckingham mentions, my experience is that these plants create many roots, eventually replacing all soil. If you wait too long with repotting them into a bigger pot (or dealing with all these roots some other way?), it may be very hard to remove the plant from its current pot (without breaking the pot - or the plant)

Spider plants have very fleshy roots. They are greedy feeders and will transfer nutrients into their root system as though preparing for a long, long drought and so look great for the longest time. Then all of a sudden things look not quite so rosy. I have knocked them out of their pots to find that the root ball of soil had been replaced by a mass of thick roots, with almost no soil left. I guess whatever soil there was, in watering, was gradually flushed out. The plant was fine since it had so much nutrient in the root, but finally reaches the limit. It was starting to live on fresh air.

Moral 1: check the root. You can transplant into a bigger pot, that's one solution, not my favourite. Moral 2: replacements. With spider plants keep new little ones coming along and watch them puff up with energy. Compost the mother plant, with respect and thanks.

9
Pest, etiolation, soil or overwatering? Other causes of pale-brown tips in Aloe Vera
5
Proper care after repotting spider plant
7
Zz plant not growing within 1 year
3
What is happening to my strawberry plants?
1
Spider plant soft discolored leaves
3
What is this problem on this succulent?
1
Is this red habanero plant overwatered and how should I save it?
3
My spider plant fell over! What do I need to do to keep it alive?
0
Home plant identification and care
2
Help me save my Variegated Rubber Plant 'Variegata' (Ficus elastica)