I'm fairly new to gardening and in need of some guidance. I've searched around for a bit but couldn't find anything except general care and pruning instructions.

Two years ago, I purchased and planted three Elder (Sambucus nigra) plants. They were all bought at a professional garden centre and came at around 15 cm in height. I planted them in a box 3 m by 0.5 m with around 85 cm between each plant. Soil depth is around 40 cm. I let them grow wild (no pruning) and gently guided the canes along a bamboo fence.

All three have been growing nicely but come spring this year only the outer two have sprouted leaves in any number. The middle one has reached the highest but the few leaves actually on it are all rather dry and curled up with a yellowish colour. They have all been watered equally and all have received one round of standard fertiliser last year. I've included a picture for comparison.

Does anyone know why the middle one is not sprouting leaves? They have all received the same amount of water, fertiliser and sunlight and given how similar they have been growing up until now, I'm baffled as to what I did wrong. I planted all of them to serve as a natural fence to the common part of our rooftop terasse and hope to grow them slightly taller but none of that will matter if there are no leaves.

Any ideas as to what can be done? As I said, I don't really have any experience taking care of anything other than the odd cactus so I'm open for any suggestions that might help. 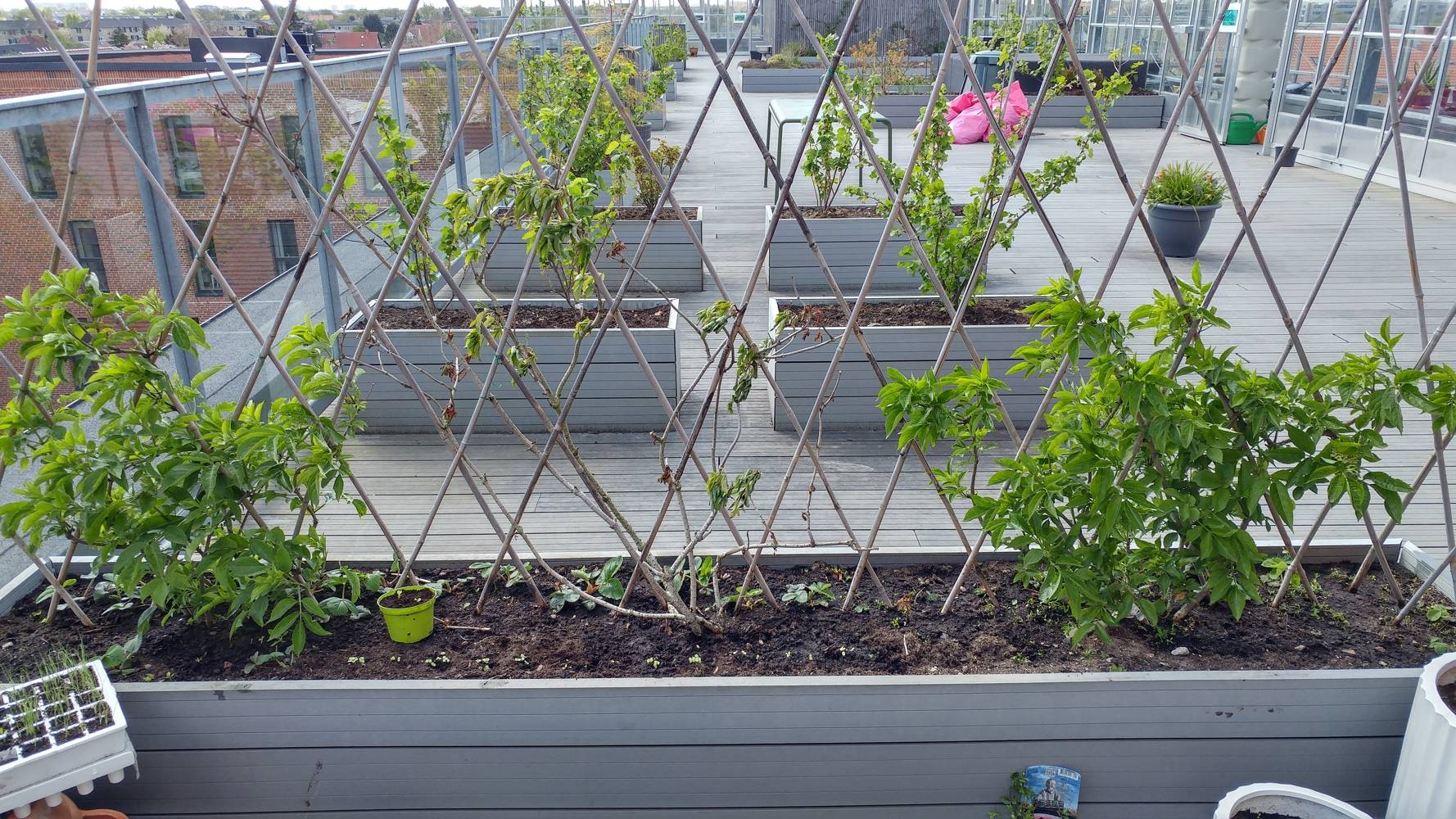 plant-health growth
Share
Improve this question
asked May 6 '20 at 14:28

Sambucus nigra is a large shrub or tree up to 6 metres in height and spread; your plants are restricted at the root and are unable to grow on properly, so whilst they will survive for a relatively short time in a container and be healthy, that won't be for very long. The fact it's the middle one that's not doing well is just chance - it's probably got even less root room because the two either side have taken up the soil space and crowded it out.

I'm afraid the only way to grow the plant on properly is to place it into a much bigger container on its own, but even then, within a couple of years, it will have the same problem. The other two left in the container will also begin to have problems by next year for the same reason; the roots and the space they need are critical to a plant's healthy survival.

There are other plants that will survive and do well for much longer in the containers you have; the trick is to choose a shrub that has an expected height and spread of up to a metre or so, judging by the depth and general size of the container. Whether that height is sufficient for your needs though I can't say...

There are other possible, pest related possibilities, but it depends where you are in the world - I note there is one stem on the middle plant that still has some foliage present.

In Denmark, borers are not an issue, you don't have them there. The most common pest on these is Aphis sambuci, an aphid which prefers Sambucus, but you haven't mentioned seeing any insects on the plant, and I'd have expected it to be present on the other two plants as well. Otherwise, there is a report of an infection on S.nigra occurring in Germany in 1991, causing reddening of leaves,small leaves, premature leaf drop and die back of plants - 40% of the plants had a mycoplasma infection, but it was not present in the other 60% affected. I can find no further reports on this problem since that date, either in Germany or any other part of Europe except for Scotland around the same time. Therefore, I'm sorry to say the most likely explanation of the problem is the one already given above, i.e. restriction at the root.

The fact that you have shoots that started growing and then died back looks to me like borer damage. The elderberry borer chews into the base of the plant and munches out the pith on the inside of the stems, making it very difficult for the plant to send sap to the leaves to keep them turgid. It might be hard to find, but look for a hole about 3mm. across fairly close to the base of the plant. The borer is in there as a larva, and will eventually emerge as an adult. They are quite large and very colourful but quite destructive.

If this is the case, what to do? The other two plants might be ok for a while but likely they will get the same borer eventually. Fortunately elderberries are easy to root from cuttings, so if elderberry is desirable there then keep a supply of new plants coming. Otherwise if the population of Desmocerus is dense there you might look for an alternate.

Not the answer you're looking for? Browse other questions tagged plant-health growth or ask your own question.

3
Why aren't my Lemon and Feijoa trees growing or sprouting leaves?
5
What to do when cucumbers are turning yellow and dying but leaves are ok
2
There is this strange white growth around the outside of my pot plants
3
Pineapple leaves turn brownish
1
Kale leaves turning yellow in hydroponic system
1
Where to place grapevines in the hot Australian sun?
3
Avocado leaves have various type of browning and dying young leaves
4
Monstera with tiny white flecks (spores?), large brown spots, small white dots