I have a hibiscus exhibiting multiple problems. Around 6 months back, the leaves had turned skeletal, with sooty black growth (fungus?) more pronounced near the base and leaf undersides. After some alcohol rubdown to treat the fungus, I'd just kept it quarantined. Now, it's flowering from past 2 months, though the skeletal/fungal appearance remained. Some of the mature/young leaves curl at the edges and turn yellow, with each leaf stalk/base covered by same sooty stuff. Recently, am observing the flower petals turn transparent before they drop off. The other hibiscus plant leaves/flowers are fine, though there's been no difference in their soil/watering etc. What could be the problem? I'd like to move it back with the other plants, but first need to ensure this isn't going to spread to them too. 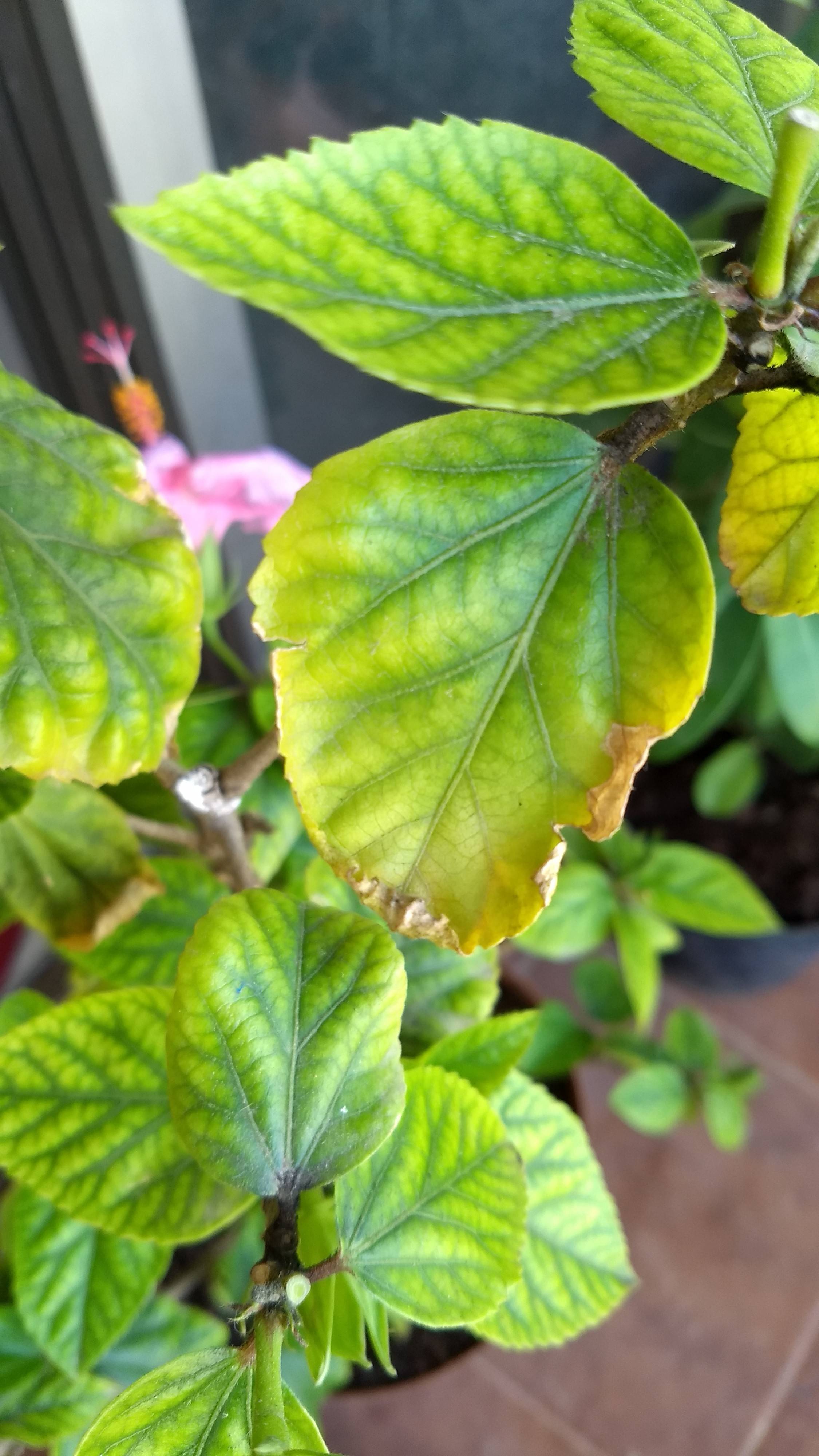 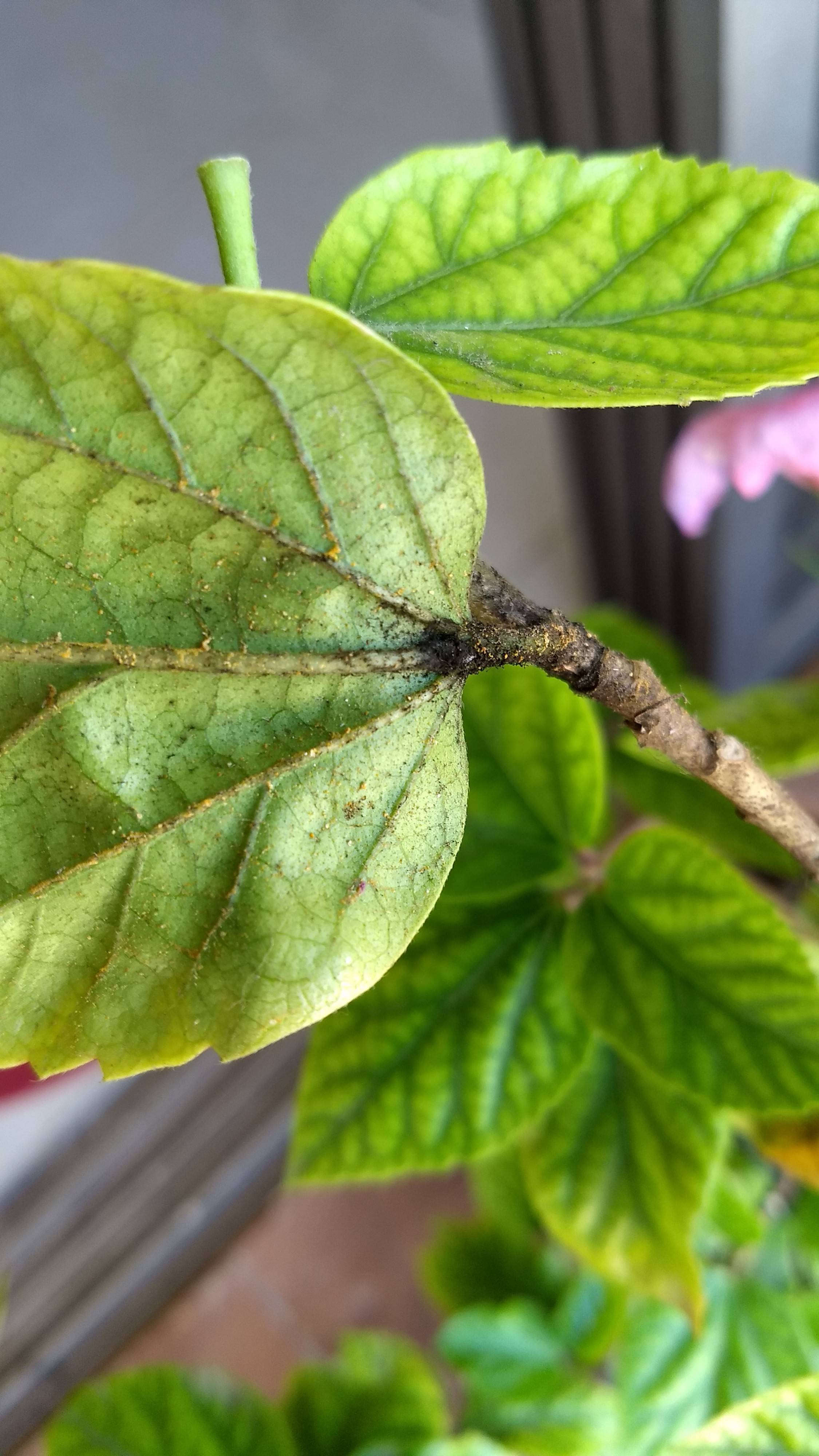 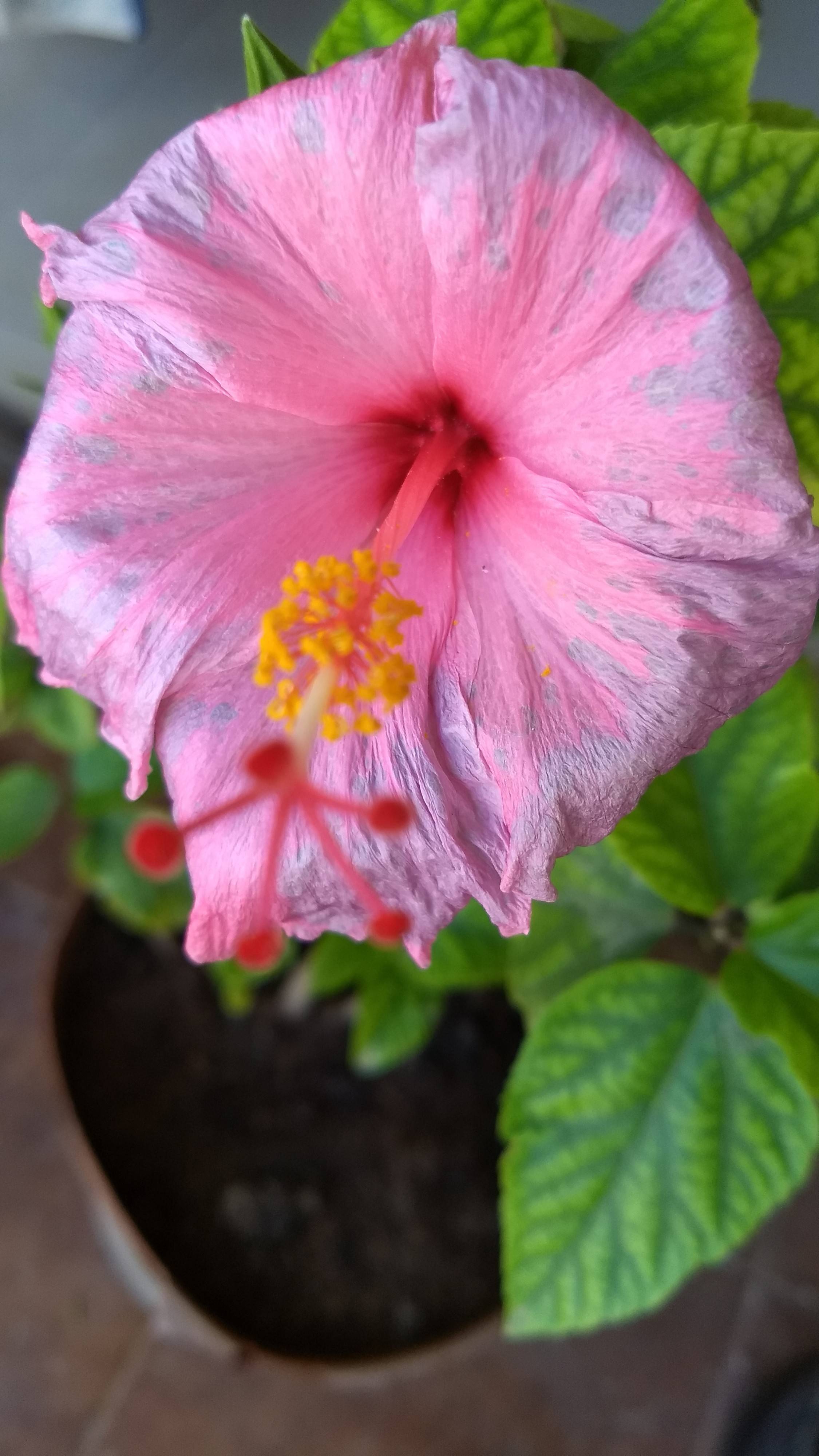 17th Feb, '18: Here's the plant after repotting. The plant wasn't healthy to start with, and I had to operate on the roots a bit to un-entangle them/fit nicely into the new container. So I was a bit apprehensive on the outcome. I'd forgotten the real green of the leaves..it'd been unwell for so long. But looks like the worst is over now :). This thread should help people struggling with similar problems...it was all in the soil! 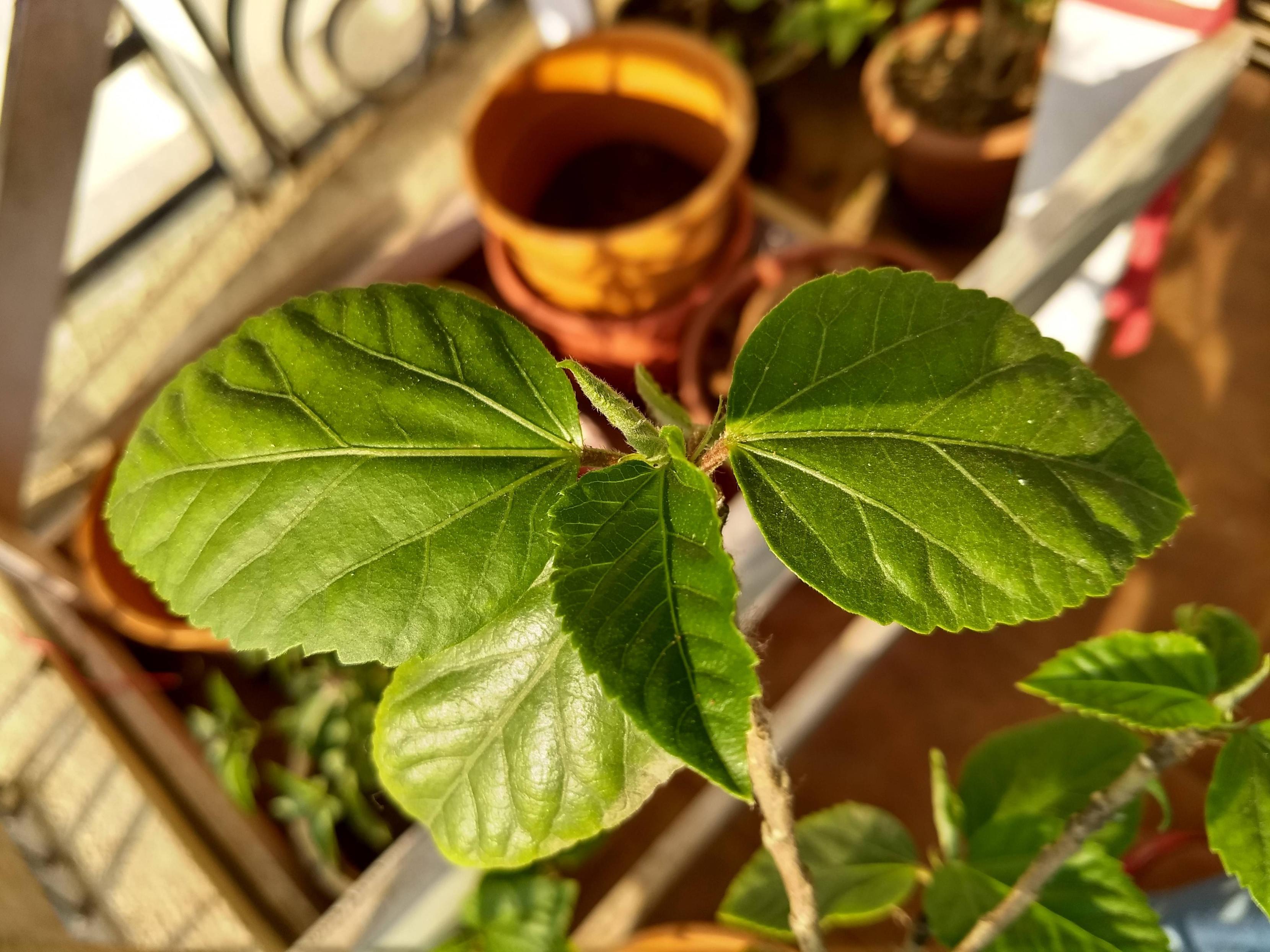 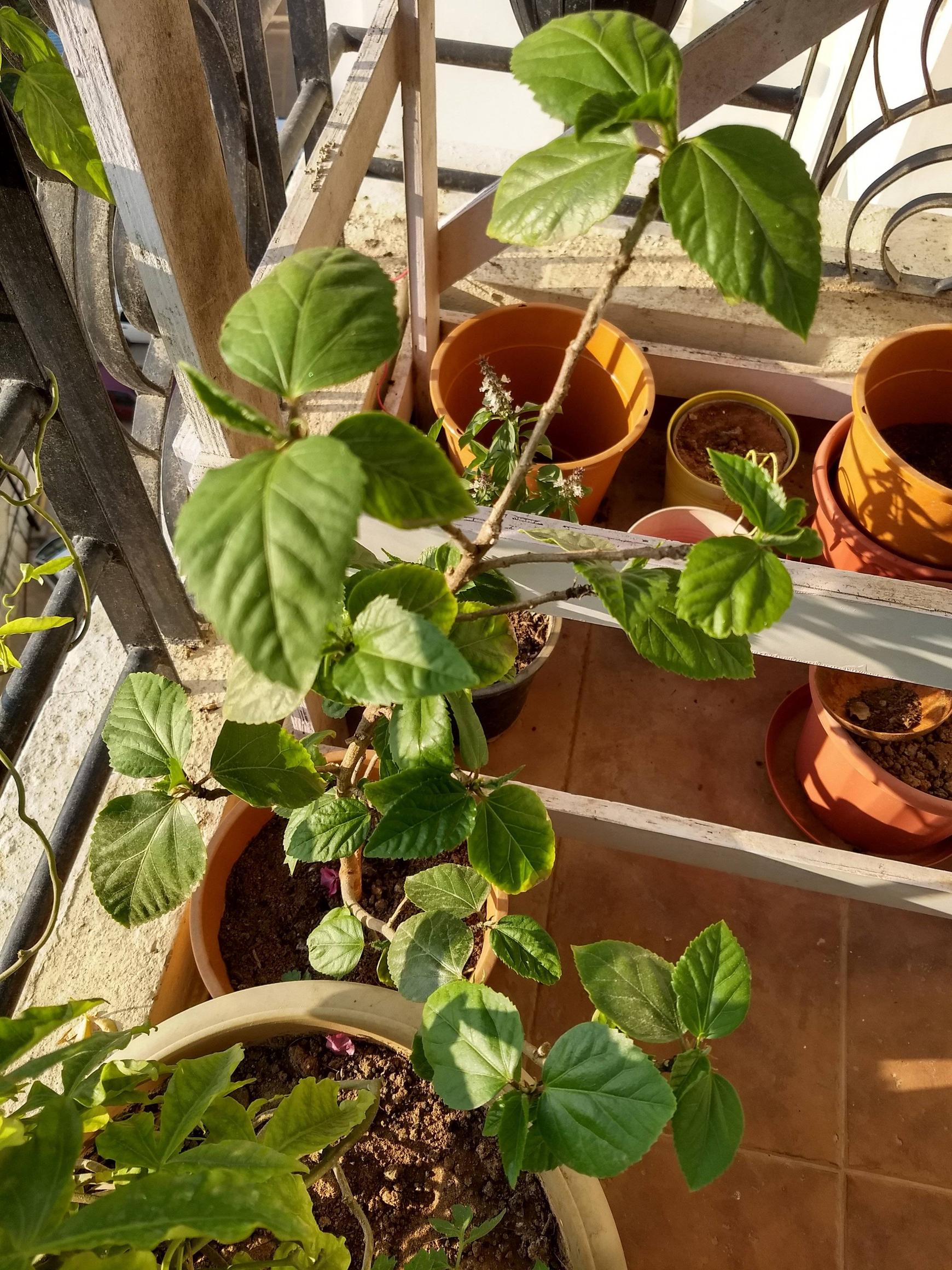 What you describe in regard to the black deposits is sooty mould; sooty mould rarely if ever occurs on its own, it usually arrives because there's an infestation of scale, mealybug or aphids. All these produce honeydew, and it's the sticky honeydew that creates the conditions for sooty mould to thrive.

I can see some tiny yellow deposits (as well as black mould) in the penultimate picture, so I'm sure you have some sort of scale infestation, though I'm not sure which scale. That needs to be treated, or the sooty mould will always return and, as you've discovered, a heavy infestation over time will make the plant sickly, with yellowing leaves which fall, and may even affect the flowers if its severe enough. The fact you've had a problem with sooty mould from six months ago indicates the insect infestation has been present for much longer than that - sooty mould is a secondary, fungal infection, so I'm not surprised your plant is looking very poorly. Because scale insect has two stages of growth, nymphs and mature scales, just check the woody stems as well so see if there are any adult scales attached there when treating the plant. If there are any, they may look like tiny (or even large), shield shaped bumps, almost part of the branch, and they can be difficult to remove; dabbing them with a cotton bud dipped in alcohol, then lifting them off is quite effective, but you should include the branches when you spray anyway.

You might be able to treat effectively with an oil spray such as neem, but it sounds like this pest has been present a long time, in which case, you may have to resort to an insecticide spray. I'm not sure which, depends what's available in your area. Whatever you do use, spray beneath the leaves as well as on top and the stems and branches - but not so much the open flowers, don't worry about those. More information can be seen in this article: Bugs On Hibiscus Plants: How to Treat A Tropical Hibiscus With Sticky Leaves

Once you've dealt with the infestation properly, the plant should start to recover and grow healthy leaves and flowers. In regard to sooty mould, once the infestation is clear and there's no more sticky honeydew,the sooty mould will not recur.

This is a list of what could be causing the coloring of your hibiscus. It could be one or a combination of the following:

Some plants are more sensitive to iron deficiency at higher pH than others. Many acid loving plants have trouble getting enough iron from the soil at higher pH and therefore show interveinal chlorosis while their neighbors don’t. 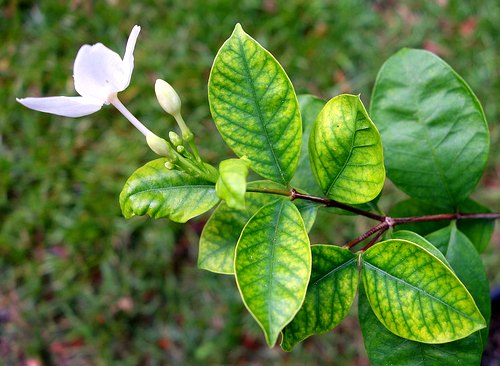 A simple balanced fertilizer is critical to use. You need to test the pH of your soil. There are simple kits for this...what soil did you use in this pot? The black is honeydew which is like heavy urine from the insects sucking on your plant and then the urine was found by bacteria and fungus turning it black.

I would change this plant's soil. Scrub the container. Repot using bagged potting soil. Add proper amount of Osmocote 14-14-14 extended release fertilizer. Wash the plant in the shower by hand, allow to drip dry. Take out on the patio at night and spray with Neem. Water only when dry. This should turn your plant around quickly...a week or two you'll notice it greening up.

Check out this list to see if anything jumps out at you. Just to make sure.

Not the answer you're looking for? Browse other questions tagged diagnosis container-gardening fungus nutrients hibiscus or ask your own question.

6
What is the white fungus growing on my Hibiscus and how do I treat it?
3
Why is my hibiscus shriveling, losing buds, and having other problems?
4
One hibiscus plant is experiencing delayed leafing
2
Best way of pruning Cardinal Creeper
7
Growing hibiscus in an 8a zone
0
Hibiscus pest question
2
White residue on hibiscus leaves