Ginger plant too tall for its own good

My ginger plant is about 33 inches (85cm) tall now, and still plans to get taller. Is this normal? I'm afraid it will fall off and break its stem, and I really don't want to hurt the root down there by installing a support rod. Is it okay to chop off the top of the plant, so that it would stop growing taller? 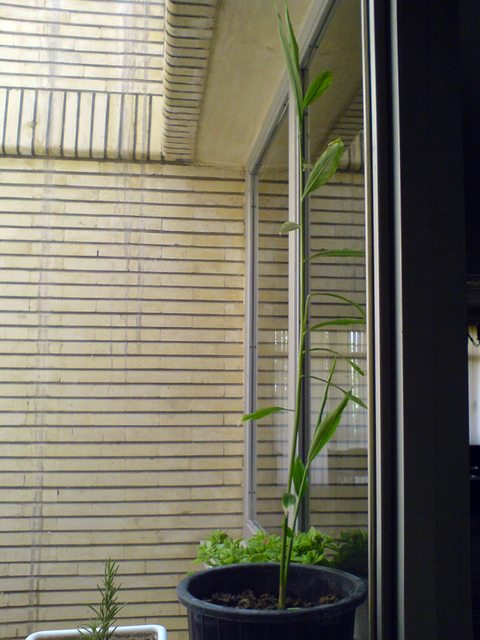 Having seen the picture, your ginger plant has grown so tall because it's not getting enough light. The condition it's in is known as 'etiolated', which means it's lanky, with a thin weak stem and long gaps between leaves. Even if you reduce the height, it's unlikely to produce more normal growth unless you can improve light conditions.

UPDATE: Even a shady-ish spot outside will give more light to this plant than where it is now. Gingers don't exactly dislike the sun, but they definitely prefer partial shade, so dappled sunlight is fine, or a shady-ish spot. Being outside also means its subjected to breezes, which means the stem will thicken up over time. The one proviso is that it's warm enough outdoors, don't know where you are in the world, but if it is warm enough, you will need to harden this plant off before leaving out overnight. I'd chop it down by half at least, harden it off by leaving it outside during the day for increasing periods over 5 days, until it's out all night and can be left outside.

Not the answer you're looking for? Browse other questions tagged plant-health growth or ask your own question.

7
How can I help my young mulberry tree grow a thicker stem?

12
What should I do after a pepper plant has partly broken under its own weight?
15
How do you save an aloe plant whose stem is weak and appears to be rotting?
3
Schefflera arboricola , seems to be withering and dying, help!
4
Does this orchid have a viable stem? If not, will it grow one if transplanted to a larger pot?
6
help! I broke my mango seedling's root
4
How to encourage weeping cherry to grow larger
8
What to do with a plant that can't support its own weight?
1
My Dracaena Fragrans Is Never Happy
3
Indoor Yucca is dying after cut/repot