Why are my zucchini dying off so early?

I've been loosing more zucchini than have been ripening, and I'm trying to figure out why. This is what I've been noticing: 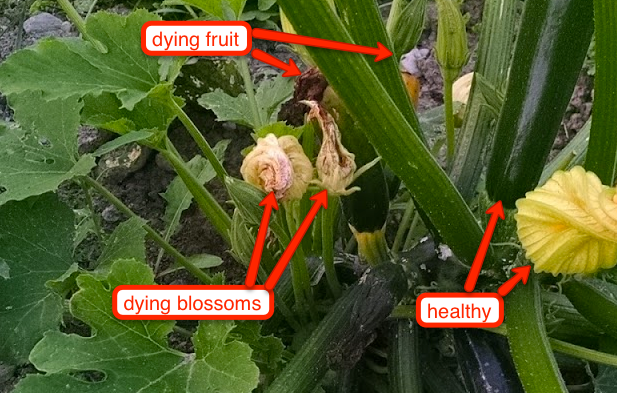 Any idea what the problem is, or how to address it? The beetles seem less common this week, but the zucchini aren't doing any better yet.

I think you have a pollination problem.

Roughly half the flowers just wither away to nothing because they are male flowers, and unless you pick them and stuff them, that's all they ever do. I can't say that stuffed squash flowers are a particular favorite of mine, but that is a way to eat them that's somewhat common.

The flowers with the 2" fruit that wither are female flowers that were not pollinated.

Taking steps to encourage pollinators in and around your garden may also help, but the "by hand" method is a lot faster to get results from, if you have both male and female flowers (sometimes you get the bad luck of having lots of one, without the other.)

All squash plants have two types of flowers; one is female the other male. The male flowers (very yummy to eat btw) die quickly having produced pollen for the female flowers. If you haven't been fertilizing with high nitrogen you might get plenty of squash. Always have something floriferous growing to attract pollinators. Don't always need pollinators, the wind works with an awful lot of plants. If you don't have reproductive growth to be pollenized then no flowers/fruit/vegetables will be had. What are you using for fertilizer? How do you know when to apply more?

Not the answer you're looking for? Browse other questions tagged vegetables pests zucchini or ask your own question.

6
Why did my young cucumbers turn yellow and fall off?
9
Plants grow but not fruit
5
How should I use one courgette plant for both consumption and seeds?
2
What's this little reddish beetle?

16
How to stop my courgettes (zucchini) rotting?
9
What steps can I use to encourage pollination?
24
Why did my jalapeños turn black?
8
Is something wrong with my zucchini plant?
8
What's the best way to kill cucumber beetles after I've started harvesting?
7
Why do some of my zucchini shrivel and turn yellow at the blossom end?
6
zucchini plant issues- fruit not setting, blossom buds black tipped & small
1
Why are my courgette leaves shrivelled and yellow?
4
Zucchini, eggplant, melon and cucumber pest/disease?
2
Why is my zucchini dying bottom up?