Why is my zucchini dying bottom up?

I’ve looked EVERYWHERE and I haven’t been able to find an answer, even though it seems like it should be something simple. The zucchini was doing fine for a couple months, and then it started turning yellow and dying bottom up. As you can see in the picture, the top leaves are perfectly green and healthy, but the bottom ones are completely dead by now, and the older leaves turn yellow and droop. It makes female flowers, but they die before they even reach an inch. A newer development is the dying flowers don’t fall off like they used to, they just turn brown and rot, still attached to the plant. It’s in the high 90s here. I havent seen any evidence of aphid or SVB damage, but I did see a spotted cucumber beetle on it a few months back. Please help! Is it beyond saving, or can it still recover? 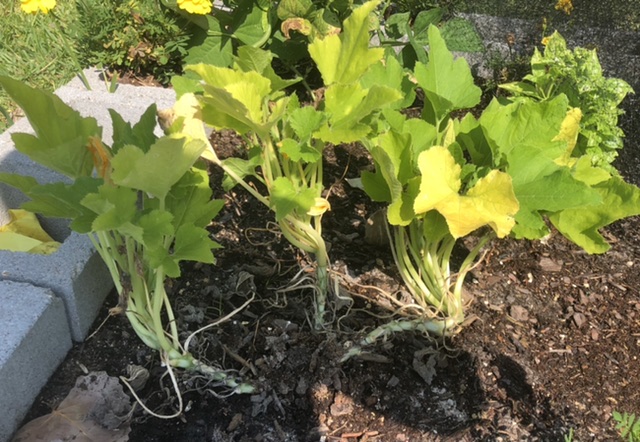 It appears that your zucchini needs nitrogen. The yellowing is called chlorosis. Nitrogen-deficiency starts at the bottom leaves. The leaf turns uniformly yellow (not just everything but the veins). When the veins are still dark, the suspect tends to be magnesium-deficiency (which can be corrected with Epsom salt). The veins are chlorotic, too, though; so, nitrogen is the suspect.

The top growth on your plants actually isn't perfectly green. It should be much darker. That's also chlorosis (just milder).

Plants with plenty of nitrogen will normally have shiny, dark green leaves.

So, all you should really need to do is give it some fertilizer, water it, and wait. For quick results, I recommend doing a foliar spray of calcium nitrate every week for a while. Nitrate fertilizers will probably work the fastest. I'm guessing calcium nitrate would help with the fruit problem, too.

It's possible your plants have other hidden deficiencies besides nitrogen, too. So, it could be a good to give it some general all-purpose fertilizer in the ground and/or on its leaves. All-purpose fertilizers tend to have a lot of nitrogen, too, and they would probably help, but the greening might happen more slowly than with calcium nitrate. You probably shouldn't use both in the same week.

Miracle Gro 24-8-16 All-purpose fertilizer has most things, but it doesn't have any calcium, magnesium, or nitrate nitrogen (it has ammonium nitrogen and urea, which together work nicely to green).

You can't mix calcium nitrate with most fertilizers if you want it to remain water soluble (if you use it with sulfate fertilizers, the sulfate and the calcium will bind together in an insoluble form, and the nitrate will bind to something else). So, you should generally use it by itself, if you're going to do a foliar spray (and you may need a mask and/or goggles).

Pump sprayers are probably the easiest and most efficient thing to use for doing foliar sprays on a small scale, if you're using dry water-soluble fertilizer. In the particular sprayer that I linked to (which says it's 48oz), you'd want about a tablespoon of calcium nitrate if you fill it all the way with water (it fills more than 48oz). You don't need to use the whole container of fertilizer in the same day.

Be sure to avoid doing foliar sprays when the sun is shining strongly. This can burn the leaves. You can fertilize the soil any time of day, though.

If there's wood or bark mixed with your soil, that can cause nitrogen-deficiency, since bacteria use nitrogen to break down the wood. If it's a wood mulch on top of the soil (as opposed to inside the soil), you don't need to worry about this happening. If there's wood in the soil, you'll need to add more nitrogen to the soil than normal (but I can't tell you how much is too much there), or else do foliar sprays of nitrogen.

Anyway, I'm of the opinion that calcium nitrate will help your plants more than Miracle Gro, for the first two weeks (I'd probably switch to something with iron, like Miracle Gro, after that). That's a hypothesis. Calcium nitrate really seems to help plants get a good start, post-transplant, but if you use it exclusively for too many weeks, the odds increase that you'll see symptoms of another deficiency.

If you prefer organic soil amendments, like fish emulsion, or whatever, by all means, use that--make sure it has nitrogen.

Be careful when fertilizing. Too much fertilizer can burn plants (no matter whether it's a foliar spray or in the soil), especially if that fertilizer is nitrogen, or a chloride fertilizer salt.

If lack of nitrogen isn't the problem (sometimes other things have similar symptoms), it's possible one of these things is the issue:

It's hard to say if they'll recover, at this point (saving struggling squash isn't historically the easiest thing to do), but it's probably worth a try. If they'll sprout, you might be better off planting new seeds, but I have a feeling they'll live if they get some nitrates (that's just a guess, though).

You can spray direct-seeded zucchini seedlings in the ground with calcium nitrate with the amount I mentioned above (I tried it), and it works awesomely. I wouldn't recommend giving it to new seedlings in the soil, though, since it might burn them.

Not the answer you're looking for? Browse other questions tagged diagnosis plant-health vegetables outdoor zucchini or ask your own question.

8
What's the best way to kill cucumber beetles after I've started harvesting?
5
Why are my zucchini dying off so early?
0
What causes tomato leaves to wilt and die from the bottom up?
3
Peace lily dying. Please help!
1
Why are my courgette leaves shrivelled and yellow?
4
Zucchini, eggplant, melon and cucumber pest/disease?
0
Squash/zucchini plants flowering way too soon