I have a large schefflera at my work place. I have been given the honor of caring for all the office plants. That's after the last guy half killed some of them. I already lost one and he jokingly said he was going to have to write me up over it.

They were all plants that I'd never dealt with before and this one has been around since the company started down here 20 or 30 years ago, from what I've been told. I'm loath to be the one to kill it, but I think something needs to be done.

Firstly, I think the soil is holding too much water. I don't know it's make-up, but it will still be wet just below the surface after a week. I've been letting it dry out down 2-3 inches over 2-3 weeks. By dry out, I mean not bone dry, but dry enough. I give it a good amount of water when I water it, but I don't try to drown it. I'm thinking it might do better if I repoted it in a lighter mixture, like non-water retaining soil mixed with some orchid bark and perlite for drainage. I don't know when if ever it's been repoted and I haven't fertilized it in the few months I've been caring for it.

One issue it has is that a lot of the leaves curl slightly. By this, I mean like if you laid a piece of computer paper over your arm and it curls downward. It's not wrinkled or anything, the sides of the leaves just droop down. It has put out a few new "branches" for lack of a better term and they aren't curled at all. The old leaves has something whitish on them that I assumed was dust. It might have been, but with the effort it took to get off with a damp paper towel, I suspect that at some point, someone sprayed leaf shine on it.

I haven't seen a noticeable change since cleaning the leaves. Today is my watering day. My question is what should I do to ensure the tree's survival. It seems to be fairly healthy. It's putting out new shoots up top. It's bare up most of the trunk, but it is putting out new growth near the bottom. It's in a low light situation, but is situated between two tall skinny windows. I don't want to repot it if it's weak, but I'm not sure it'll get stronger if I don't. I suspect some of the roots may be rotting because the potting soil is holding so much water. What should I do with it? Thanks.

I'll post some pictures if I can this afternoon when I water it. It's located in the presidents office, so I can't just start walking in and shooting pictures. I don't have the option of moving it either. We don't have any spot that has any better lighting than that anyway. Thanks. 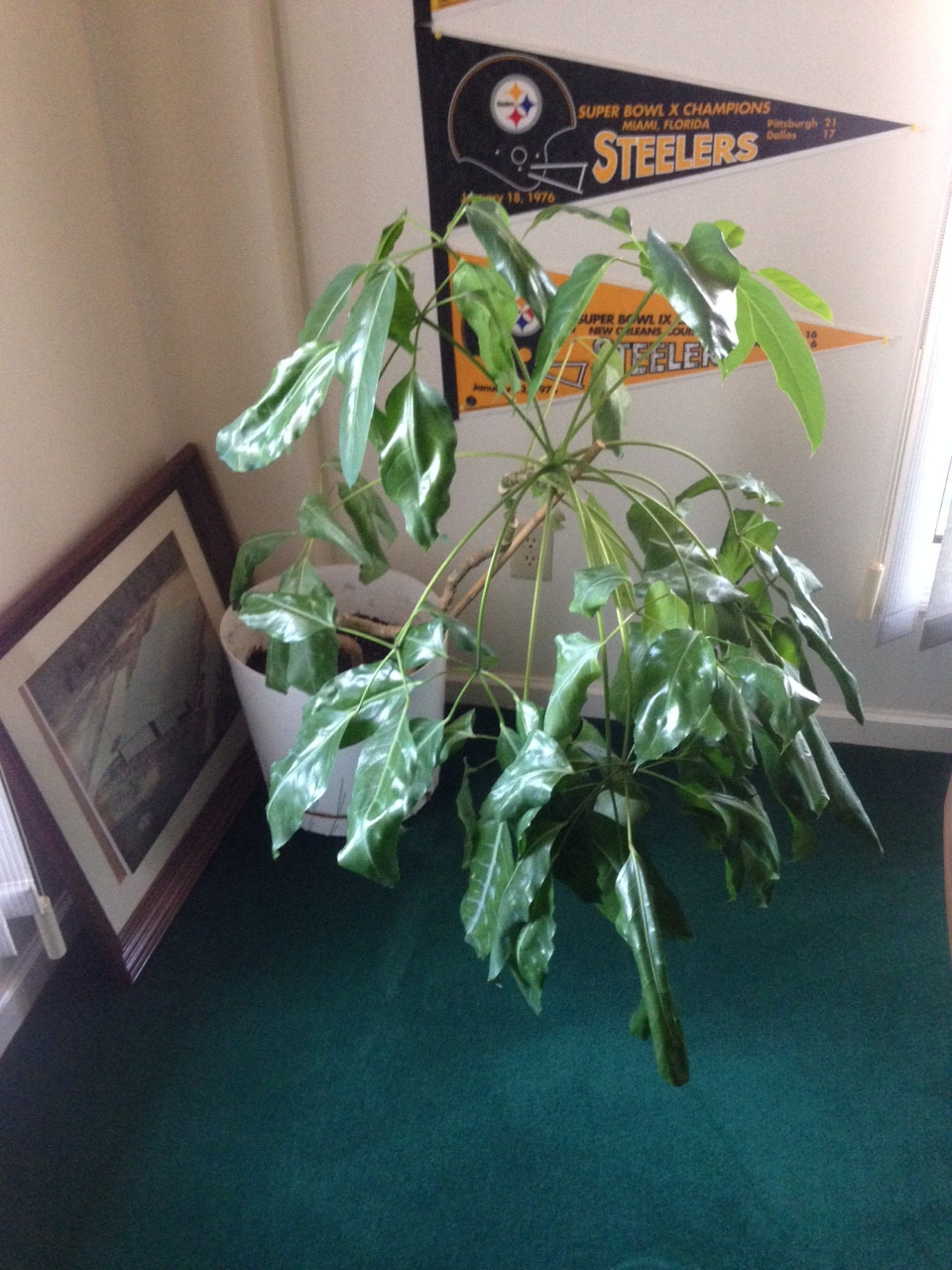 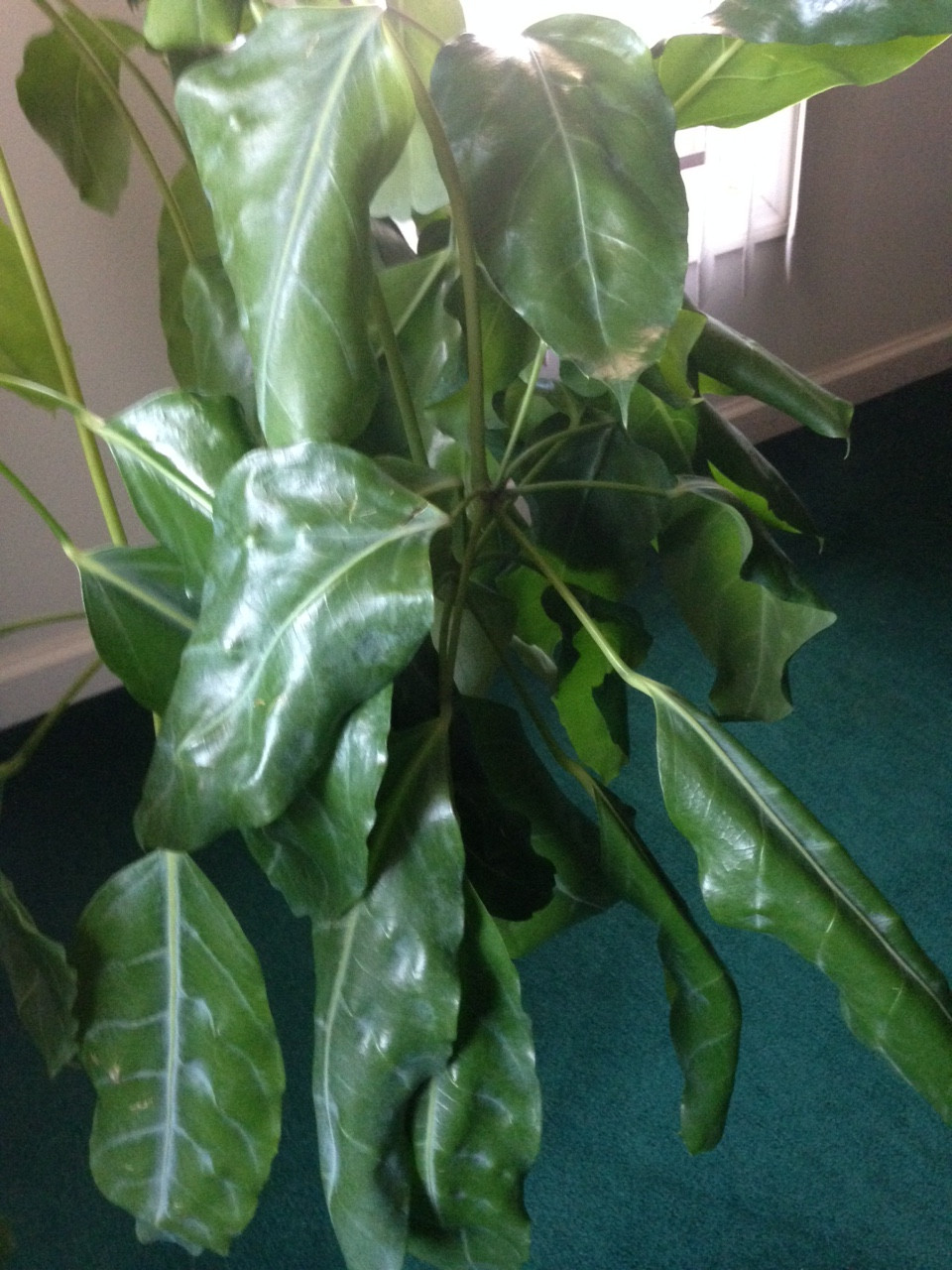 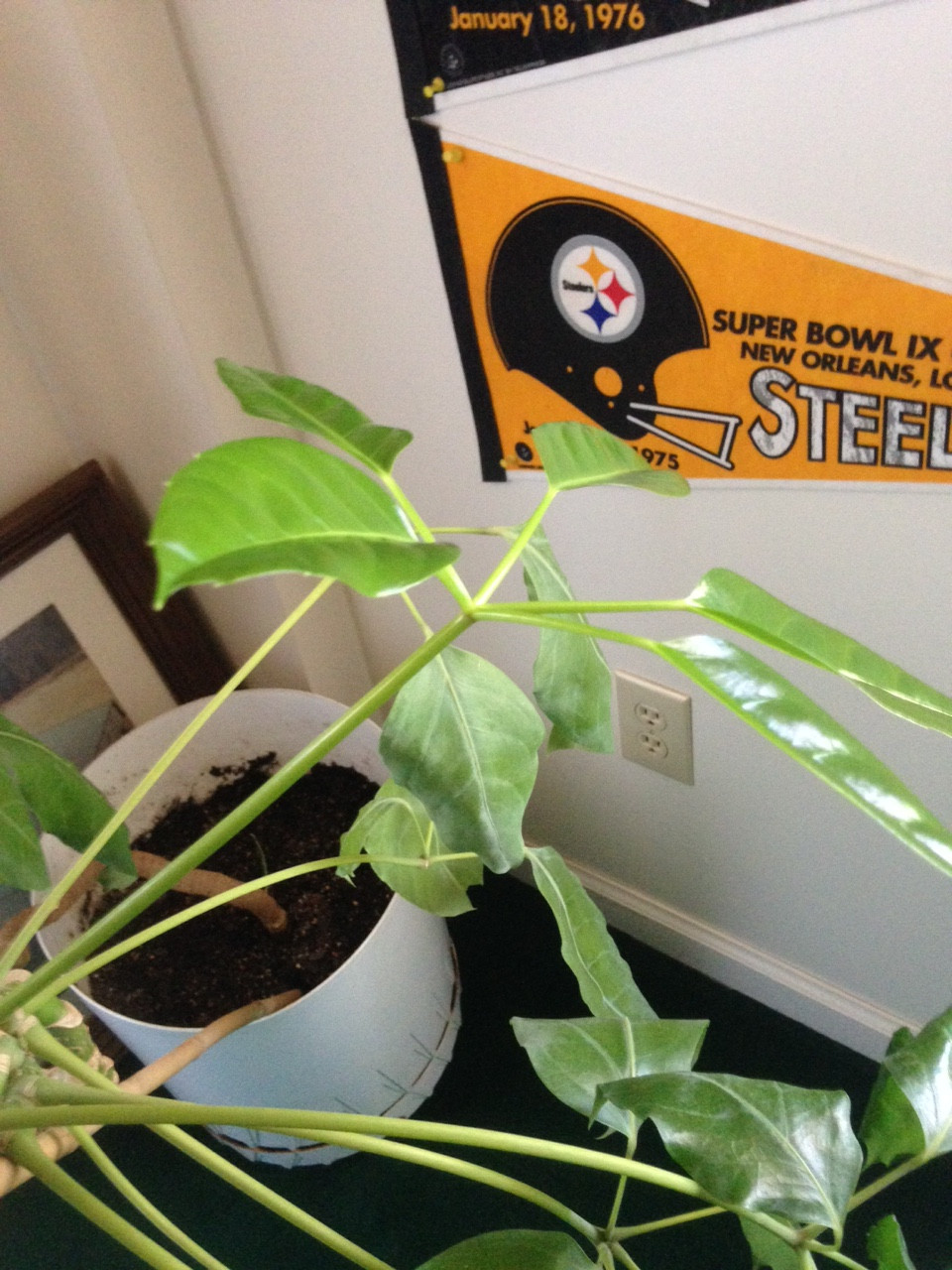 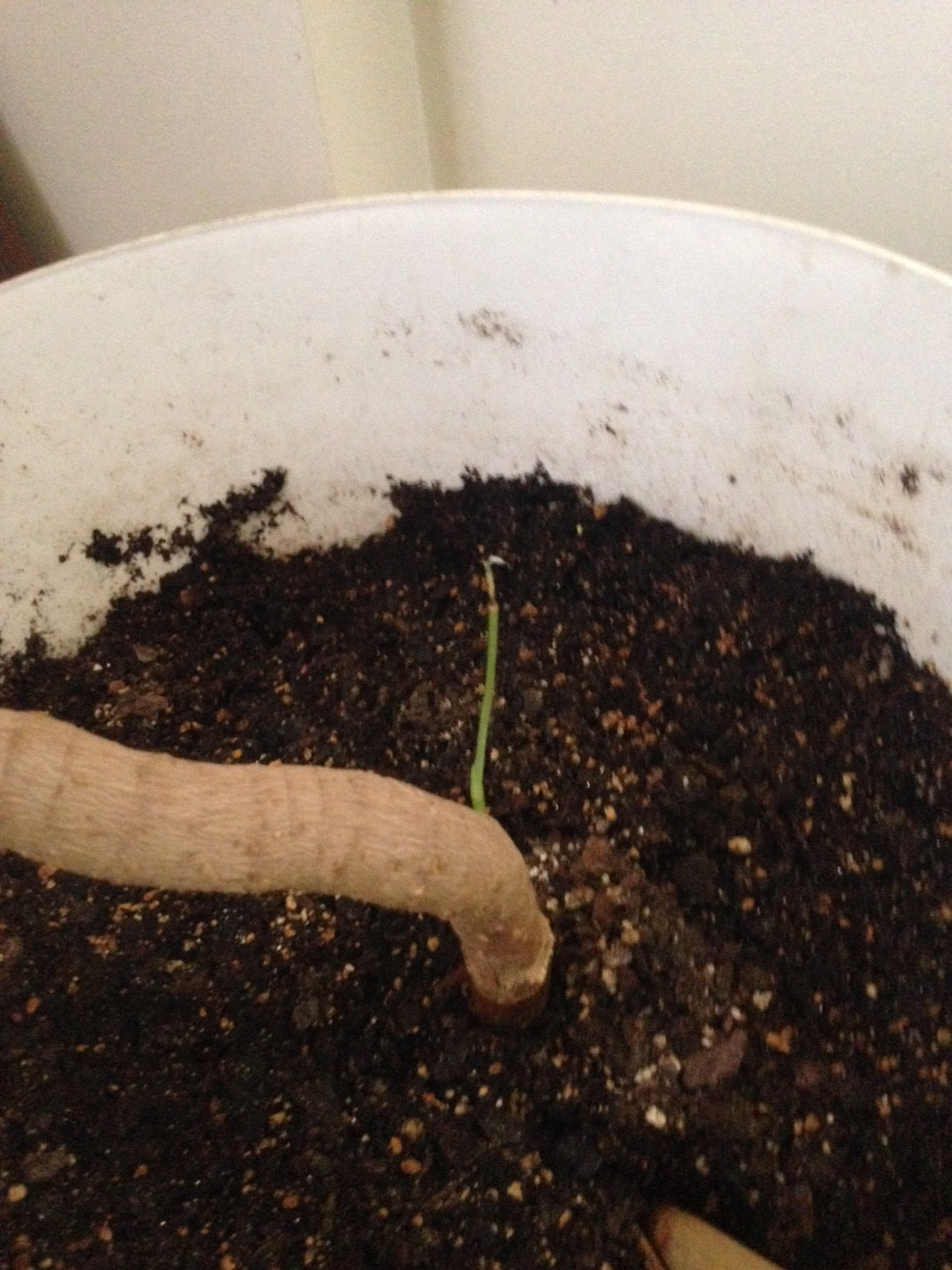 Bamboo, as you can see, it doesn't have a tray where the excess water can run out, but I do have the other plants, which do, tuned to where barely any water runs out the bottom. I use those judgments when watering this one. It's another reason I want to repot.

Photographs would indeed be very useful, but in the meantime, some guidance about watering.

I imagine this plant is standing in some outer container so that the water doesn't run everywhere? Assuming it is, then do you empty out that container 30 minutes after you've watered, or is the plant sitting with its roots in water in that container? If the plant is very large, then it might be quite difficult to empty out any excess water, but that would certainly explain why its remaining wet for so long.

In theory, a watering regime for most houseplants is as follows - water when the surface of the compost is just dry to the touch, but not shrunken from the sides of the pot. When you do water, water well, then empty any outer tray or pot after 30 minutes, and again 30 minutes later if there is more there. After some practice, you get to know how much water to put in so that its not actually producing a flood in the outer container - it might merely be damp or have a trace of water within it, and that can be left.

As for feeding, a foliage houseplant food similar to Baby Bio (liquid in a bottle) added to the water from spring through to mid summer, applied once a week or fortnight, will do the job. Not sure this is available where you are, but Miracle Gro houseplant food is.

Can't comment on whether it needs repotting until you've added photos. It does sound as if it's not particularly attractive, and may need cutting down to where the new growth is, but I'll comment on that when the pictures are posted.

Well, I don't know what to tell you! I reckon you're right, it is Schefflera amate, but its grown forward to get more light, so now its got a bare and crooked mainstem with all the growth dangling off the top of that. If this was in my home, I would unhesitatingly cut it right back to about 6 inches, just above a node, change the potting compost for something a bit lighter, change its position so it gets a bit more direct light, feed it, water it as described earlier, and wait for bushier regrowth, which will most definitely arrive. And I'd pop the top parts, about 6-8 inches long, into a bottle of water on a windowsill, wait about 6 weeks for roots to arrive and pot those up to get new plants. But, its not in a home, it's in your president's office... so it depends how brave you're feeling!

Without being able to increase the amount of daylight it receives, I'm not sure there's much you can do - given its circumstances, it's not doing too badly, frankly, poor thing's even attempted to put out new growth at the base. Yes, its etiolated and lanky, but it will be, growing in such a position. As its in a self watering pot, you could try reducing watering even more, to see if the leaves respond by not being curled at the edges.

Not the answer you're looking for? Browse other questions tagged trees plant-recommendations potting-soil or ask your own question.

7
What soil mixture should I use for my office Schefflera?

6
What are some succulent plants that are suitable to be planted in my office?
8
Plants to dry out a soggy lawn
3
Would placing a small shed inside the drip line of a cedar hurt it?
4
Recommendations for plants next to front walkway
6
What's the fastest way to dry peat before re-potting an overwatered succulent?
6
Ideas needed to sort out this waterlogged, dark, mess in front of my house
5
Dawn Redwood Bonsai Forrest Issue
2
Lawn substitutions for yard with active dogs
2
Whats the name of this plant and is it edible?
2
Plant recommendation for a home office