Recommendations for plants next to front walkway

I'm trying to find the right mix of plants between the walkway and the exterior wall of the house as you can see in the picture below. There are a few palm trees so there is not a lot of direct light falling in this spot.

The previous homeowner had planted a couple of rose bushes (center) that I don't mind getting rid of - they're alive but that's about it. The other two on the side are either dead (rightmost) or almost dead with a few leaves (leftmost).

I'm in USDA hardiness zone 10b / Sunset climate zone 23. I'd like to replace these with a set of plants that: - would work in the shade - have some color - waterwise / somewhat drought tolerant

Maybe a mix of some taller plants at the back with some smaller ones (like the moses-in-the-cradle I saw at HomeDepot) in the wider spots in front?

I tried looking at colorful, drought-tolerant plants online but I don't have a green thumb so not sure how easily they would take, care needed etc.

Any recommendations are greatly appreciated! 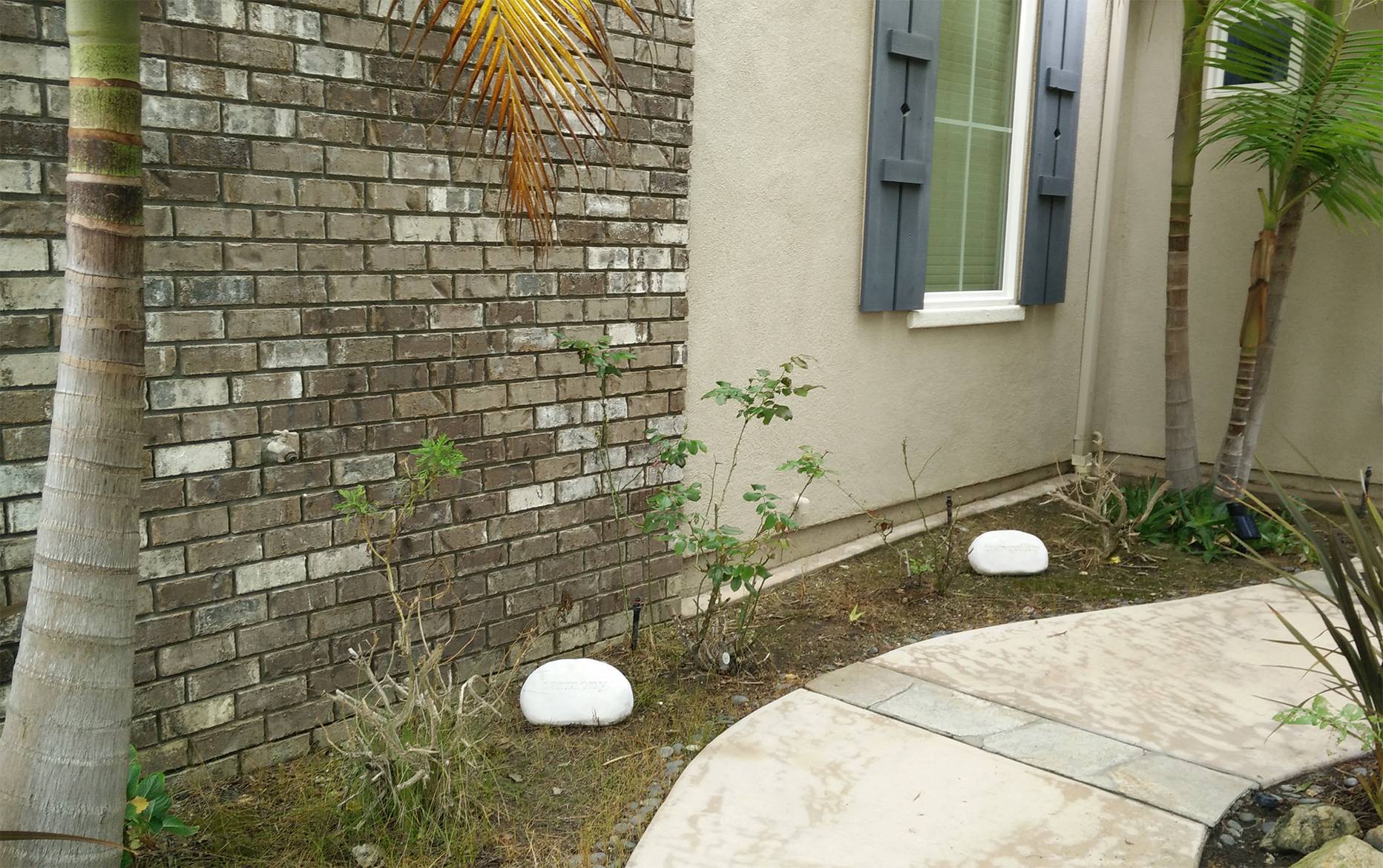 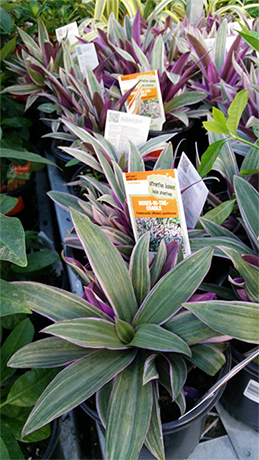 Edit: The 'drought-tolerant' is a nice to have, the watering schedule is currently set up for 2-3x a week. So as long as the plants don't require a lot of water, that would be fine.

Edit 2: In response to Stormy's question, here are some more images of the front walkway area. I'm afraid there is no 'yard' (real estate is $$$$ here in southern Cal). Apologies in advance for what is now a very lengthy post

There's 3, maybe 4 areas we will "update" over the next year or two.

Image A: This is from the house looking out to the street. The area outlined on the left is where we hope to put Hibiscus or Hibiscus + Bougainvillea next spring. Purpose is to also form a barrier as my next-door neighbor has an overgrown/unkept backyard and does the bare minimum in the front to keep the HOA off his back. At the same time, the wife likes Hibiscus flowers so dual purpose.

There's the area on the right that was covered earlier.

Image B: Same view but from the other side, for a close up of some the plants in the front left.

Image C: Close up of the center area. I removed a dead plant from the left, and this is where I'm hoping to put in a Canna tropical. The other side has what seems to be lifeless rose bush.

Image D: The front. As you can see, the previous homeowner allowed the ground cover to take over, either by choice or otherwise. Not against the ground cover but I have not yet seen those two small bushes flower. (Maybe they do so in early spring, as they look exactly the same since we bought the place)

Image E: Close up of the last bit. There's a succulent, a hydrangea that is peeking out from the back, some tall grass that needs to be cleared up :) and etc.

In a nutshell, I'm open to ripping most of these out over the next couple of years and putting in something that works, looks cohesive but at the same time is colorful & leafy/tropical.

I realize this may be a bigger question than what's possible to answer easily, hence recommendations for any one area is appreciated as well.

I am hoping to take on one area at a time (side of the house, center, and neighbor), wait until it settles and survives and then move on.

Thanks for reading till the end! 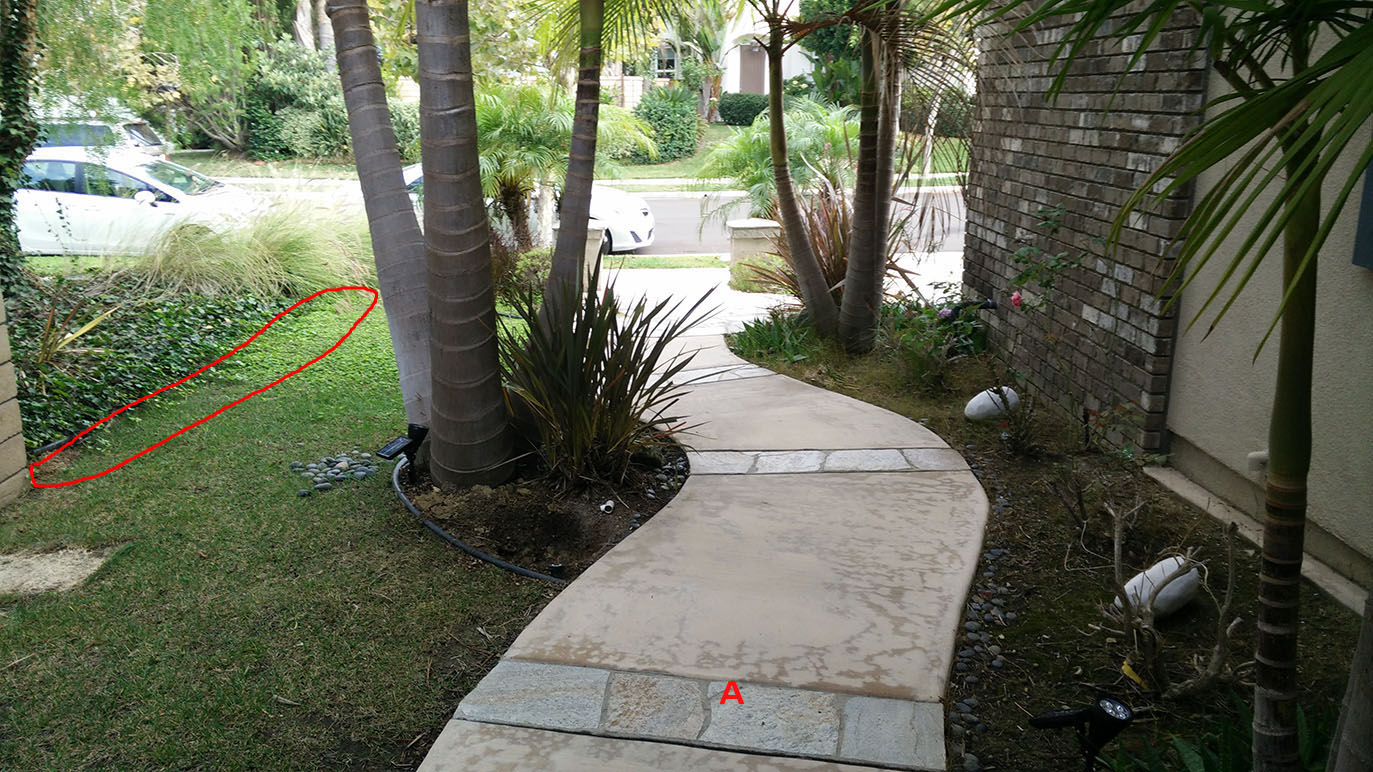 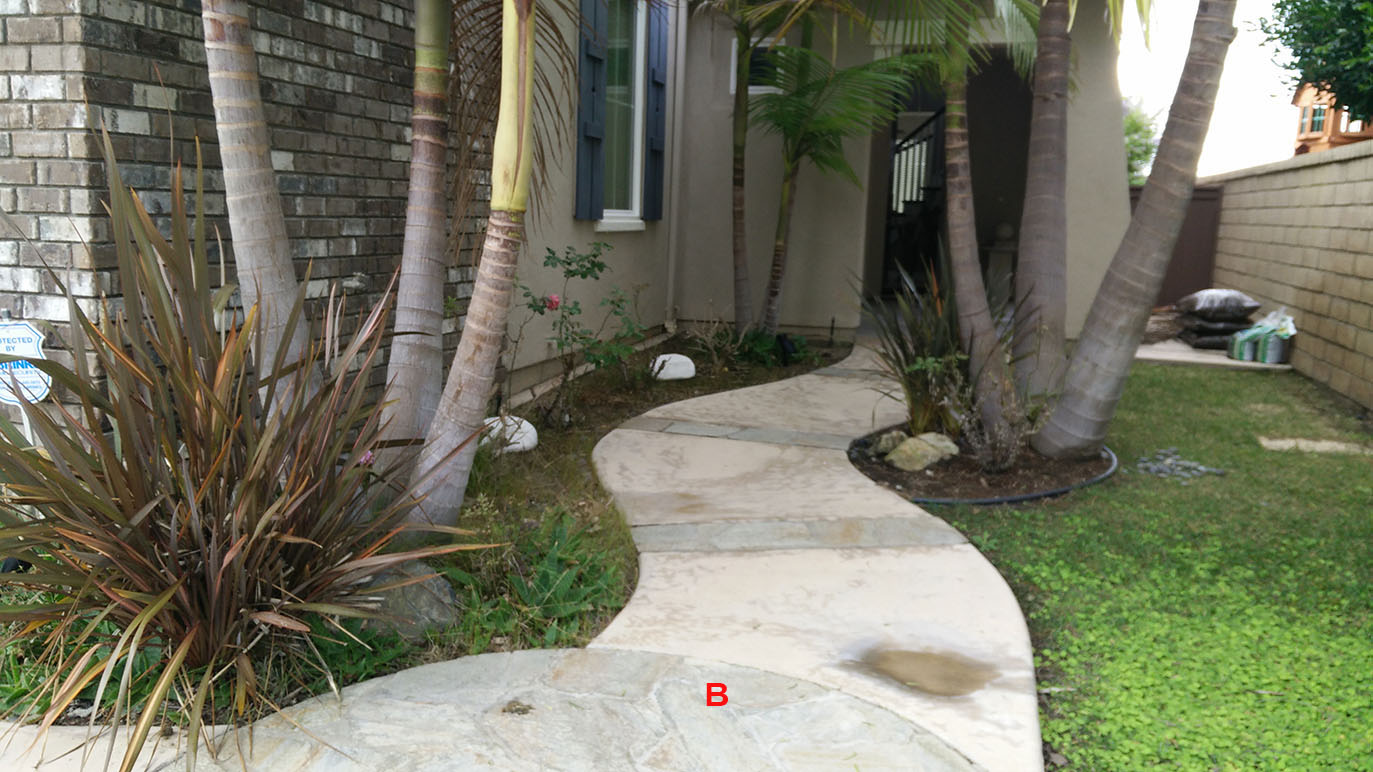 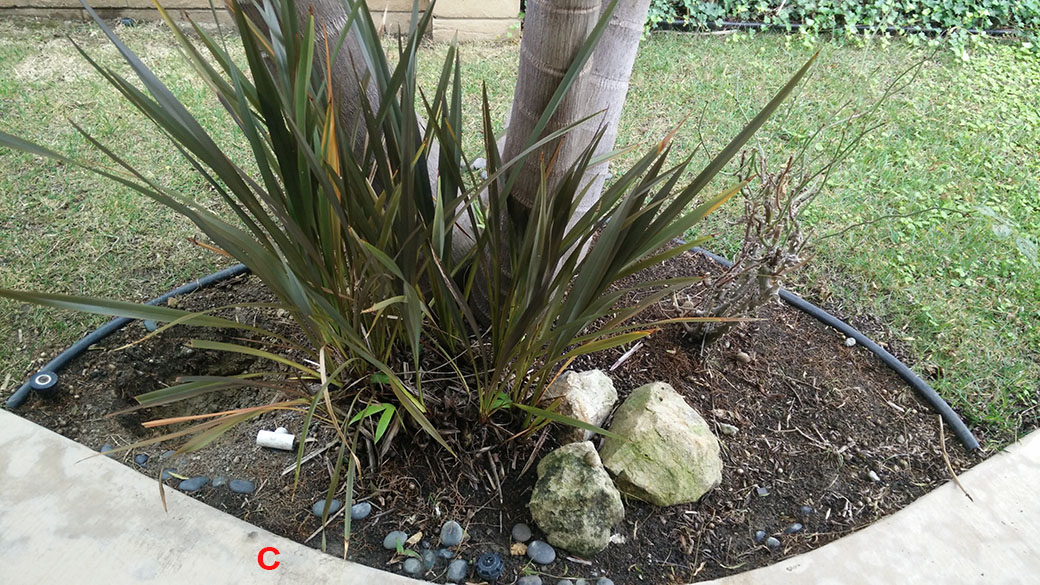 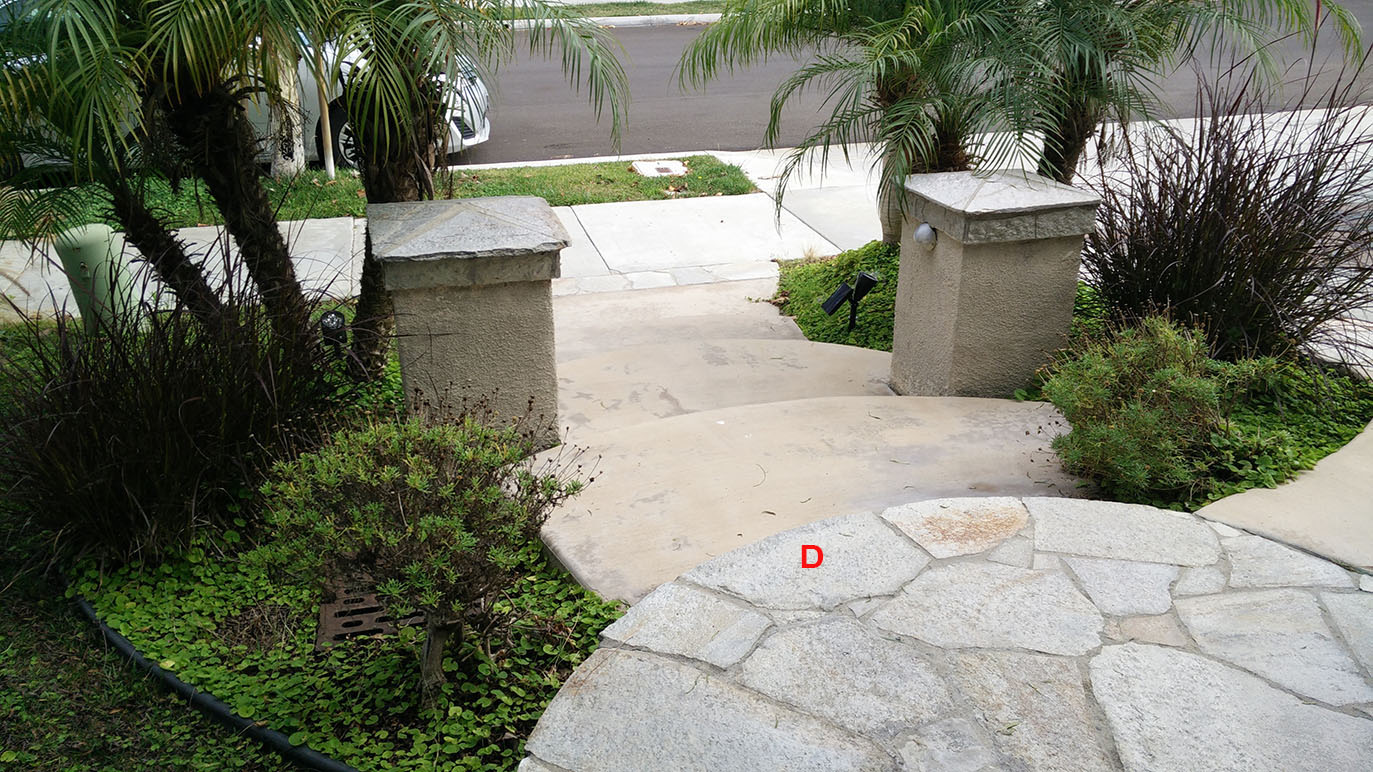 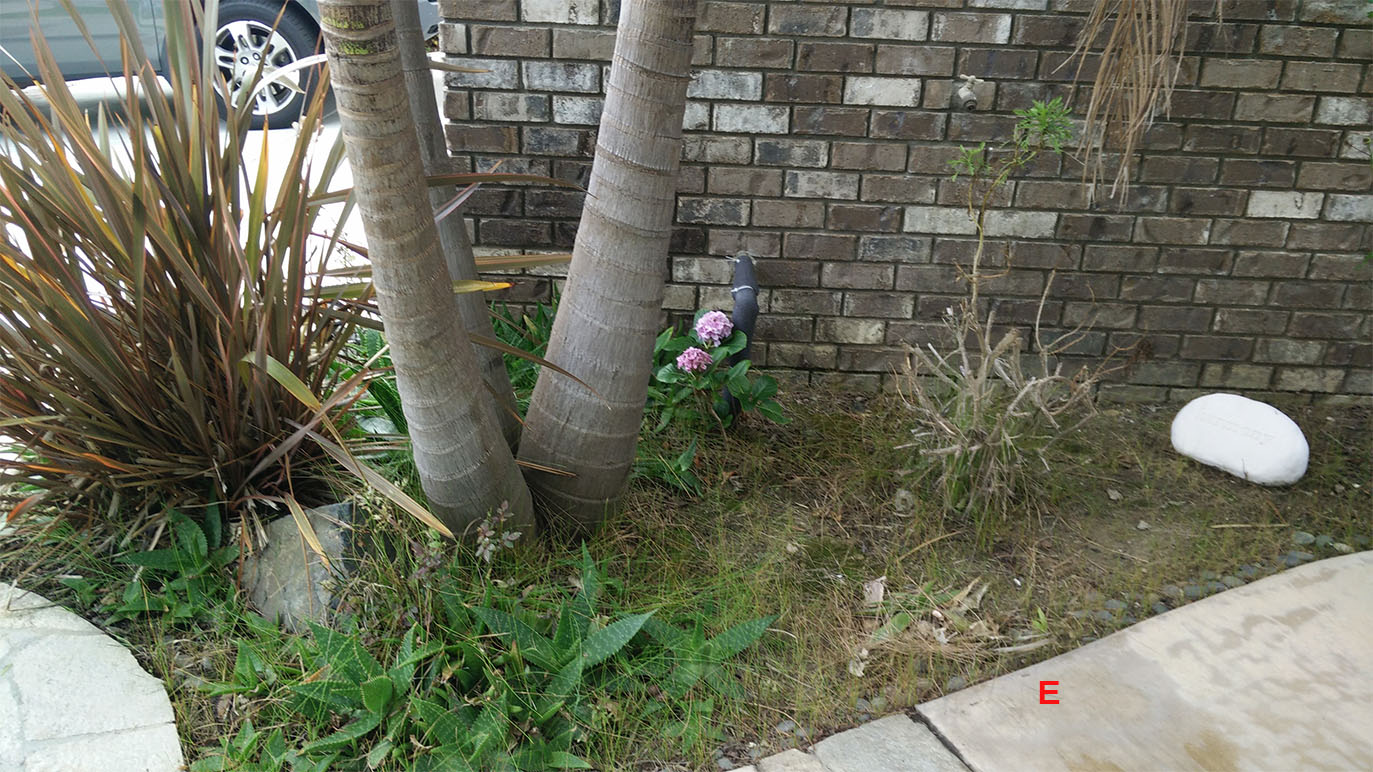 Depends how big the whole area of the yard is whether you stick to one plant only or not - I wouldn't, I'd use probably 3 different plants planted in groups of at least 3 or more, depending on the ultimate size of the plants chosen. It won't be easy to achieve the layered effect you want with planting because the border looks to be quite narrow, and particularly narrow in the middle part, where the paving curves. It's probably best to stick to group planting along the area.

The Rhoeo spathacea 'tricolor' in the photo (your Moses in the Cradle) should work there, though it does colour better with some sun - I suspect it would go quite plain green in full shade. Liriope is definitely one to consider - common name Lily turf - there are variegated leaf versions available such as L. muscari 'variegata' or L. 'Silvery Sunproof', and it produces short stems with lilac flowers.

Chlorophytum cormosum (Spider plant) would be good, but it doesn't like to dry out all the time, so that might mean it's not a good choice if you can't keep it watered as necessary.

Brachyglottis 'Sunshine' might work (sometimes still called Senecio greyi or Brachyglottis greyi) - I'm just not sure whether it would cope with the temperatures in Zone 10b - it does grow in other parts of California up to Zone 9b, so might be worth risking. If you risk planting this one, it gets taller than any of the others I'm mentioning here, with a similar spread (can be clipped or shaped once or twice a year to make it rounded if you want), so care should be taken when positioning it. Responds very well to trimming, shaping and hard pruning. Its grey foliage would make a good backdrop for that purple leaved Phormium or Cordyline I can just see the edge of, bottom right in the photograph...

In light of the new set of photographs you've posted, and your suggested plantings, I hate to be the bearer of bad tidings, but I doubt any of these will work. The area is shady - bougainvillea, for instance, needs a minimum of 5 hours direct sunlight to flower successfully, and it needs a framework to climb or be tied to, so I'm wondering what you were thinking of supplying for that. Second, the ivy next door is a big problem - in Photo A, you show a new bed outlined in red where you're thinking of planting Hibiscus of some variety and the Bougainvillea - if you open up the ground there and plant into it, the ivy will spread into that in a heartbeat - its likely the roots are already encroaching under the 'grass' or lawn or whatever it is that's already there. Planting anything in that area will not 'keep back' any growth from next door, its topgrowth will continue its inexorable invasion unless it meets a solid object, when it'll climb up it (if its actually Ivy).

Equally, Cannas prefer full sun, or about 5/6 hours in hotter climates, and won't do at all well in no sun conditions, plus I doubt there's much root room to add anything at the base of the King Palm shown in Pic C, you'd need to try to dig around a bit, gently, to see how much 'free' soil there is available - there may be hardly any, which means you can only put very small plants in there.

Really, the only way forward is to look at shade planting exclusively - the roses need to come out, they'll never do any good with such low light levels. Nearer the front of the property, there is certainly more ambient light, but you have said there isn't really any direct sunlight even there for any length of time, which means that choosing shade lovers is probably the best way forward. One other option to consider is removing the King Palms IF that means some sun will reach the area - by doing that, you change the conditions and can then consider other plants. It does, though, seem almost criminal to remove them - I can't see the tops so don't know how attractive and healthy the foliage is, but the trunks in themselves are things of beauty. Note that your King palms like neutral to acid soil conditions, so you can assume that's what your soil's like there if they're growing healthily.

Ornamental peppers would look pretty good there, I think, and they should be perennials in your zone. They would require more water and care than many options, but you could get fruit, too. Chinese 5 Color, Medusa and Black Pearl are a few example varieties of ornamentals. Not all ornamental peppers are said to taste great, but some of them (including Chinese 5 Color) should taste fine.

You definitely need a 'foundation' or 'skeleton' plant. Too many different plants ruin a landscape. Plan on chosing ONE plant and planting the entire space...The 'Moses in the cradle' if it works in shade...you'd need a minimum of 12. I'd also pull all the little foo foo plants that aren't working for you. I need to check on your zone (have never had the priveledge to garden in heaven!) so I could give you more choices. Home Depot is not the best place to purchase plants!! I'd go to a bigger nursery, possibly even a wholesale nursery. Others on this site might have more experience with your zone...do not go crazy with different plants! This is your front door (I think) and a professional (such as moi) would plant ONE SPECIES for this space! Homeowners always make the mistake using too many types of plants and your landscape will suffer in composition, energy to maintain and drive you crazy...

Liriope is a great choice by Bamboo. Acanthus mollis or Bear's Breech for shade/partial shade. For the sun, Crocosmia...either red or yellow. You need a ground cover that will be consistent and one or two other cool plants for seasonal interest. Once again, from a professional and from an artistic viewpoint...one or two or three plants that THRIVE is spectacular. Anymore for this area you'd better be into maintenance and know your plants to have curbside appeal.

Here are a few other great, tried plants to consider: Ligularia, Heleborus, Hosta, oh! Gunnera would be a super specimen plant!!

How fun! First I would like to know what kind of feel are you going for?

Which colors do you prefer? Are you wanting a rustic feel? An adobe feel? An herbal feel? More perennials? Annuals? Bird/bee attractants? Take a look at some of my displays if you need to get an idea for answers to these questions. I live for this kind of stuff so if you want help I'm all in. Once you get back to me with some of this info I can sketch you out a simple idea chart (ALWAYS USE ONE WHEN PLANNING!). You won't have to follow it to the letter but it will help you get a better idea for what you can do and how it will look. We will take into consideration the maximum growing range, the sun preferences and such so that you can plan accordingly.

2
What is this plant with red/green leaves and yellow flowers?

18
What is the best shade tree to shade the front of my house?
3
What are good plants for salty, sandy roadside conditions in Maine?
5
What are some recommended perennials to grow under large spruce trees in an area of about 350 sq. feet?
8
What houseplants will best filter the air for a retirement home?
7
What Would Be A Good Shade Tree for Oakville, Ontario, Canada?
6
Looking for plants to out-compete poison parsnip
6
Ideas needed to sort out this waterlogged, dark, mess in front of my house
5
What vines should I plant to cover my aluminum patio in southern Texas?
3
White alternative for Alchemilla Molis