I grew some butternut this year and they turned out great but one of the vines has started producing something that doesn't look like a butternut: 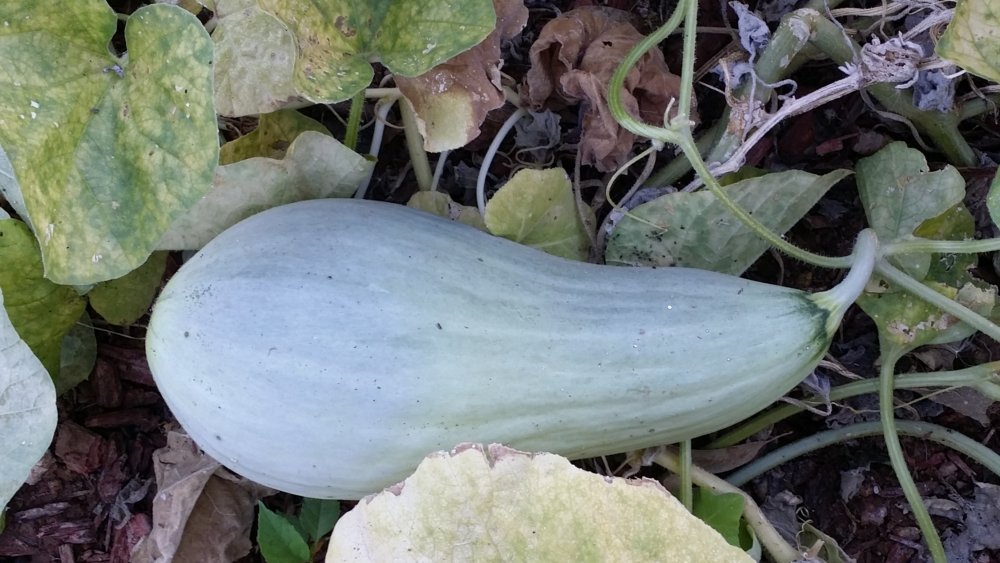 In hunting around the closest image I've found so far is from this blog: http://recipe-junkie.blogspot.com/2012/10/bish-bosh-lots-of-squash-some-soup.html

Is this a cross-pollinated butternut or a recognized vegetable? If the latter, what is it called? Is it edible, and if so how can I tell when it's edible?

Squash varieties in the same species freely cross. If you want to save your seeds for reuse, you have to grow only one variety from each species -- and hope that none of your nearby neighbors grows squash. Note that a single species can have varieties that include summer, winter, and ornamental fruit.

The shape of the fruit is determined solely by the genetics of the fruiting plant, or so my botany teacher told me. You have an unusual one because the people you got the seed from got a bee wandering in from some place that had a compatible squash of a different type. @Shule's comment above indicates that the pollen can affect the fruit. Is this odd one on a plant that has normal looking squash, or are all the squash on this plant odd. If it is a single squash, the Shule is correct, although I don't understand why yet. If they are all like that, then I suspect you had a weird seed in the packet.

As far as I know all the crosses are edible. You won't poison yourself. Some are tasteless, some have woody or stringy textures. Winter keeping will be variable.

The seeds aren't likely to breed true, but it doesn't hurt to try.

A comment asked me to list the hybridization groups. I thought there were 4 that included interspecies hybrids. There are 7 hybridization groups, 4 cucurbits and 2 cucumis, and one citrullus. Note that the species and the use do not correllate well.

(And this is why the hybrids may have odd taste/texture.

17
Why are my squash shrivelling?
5
Squash or gourd? Monster plant growing from mulch put on empty bed
8
Do cloned tomatillos pollinate each other?
3
How to ripen butternut squash if vine dies
5
Will my squash ripen off the vine?
6
Can you help identify the kind of squash?
2
Will butternut squash ripen if taken off the vine?
1
Can tepary beans cross-pollinate with common beans?