I've planted some sunflower seeds a couple of months ago and now they're growing successfully but they're somewhat slanted currently rather than growing vertically. Do I need to place some sticks/cable-ties to keep them upright or will they self-align eventually?

They will probably self align with maybe a crook in the lower stem; give them as much overhead light as possible. This answer is based on experience with a flat of mine which currently looks like this: 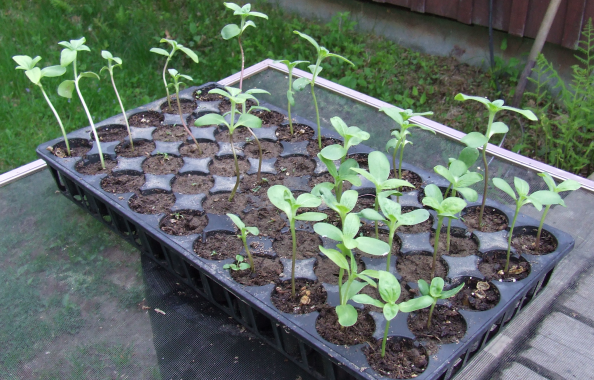 The story here is that I sowed a flat of 50 sunflower seeds and foolishly put it out where chipmunks could get at it; I wanted to give it as much light as possible. The seeds had already started to germinate but the chipmunk mowed through the flat anyway pulling out all the not yet germinated seed and chewing off the growing tips of many of those already up out of the soil.

On the left (far) side are a few of the original seedlings that by chance survived and on the right are some later seeds re-sown in empty cells and given more light and protection. In the last weeks the really tall ones have been flopped over several times in gusty winds and dark skies.

As you can see even the seeds given plenty of light stretch upwards quite dramatically from the soil and of those that suffered the attack many are almost vertical again; there are a few with a bend which probably will not go away but we shall see.

Not the answer you're looking for? Browse other questions tagged sunflowers or ask your own question.