When to cut chives for drying, and can I separate them?

Should I wait until my chives have bloomed to cut them for or can I cut them anytime? Will the taste be different? I'm growing them in a small terracotta pot inside. They're small but I read online to snip them when they're about 8" tall, and they're about that.

Also, this is a pod of 4 bulbs. Should I separate them? And will separating them help growth? Or a bigger pot (included a yard stick for size reference in pic). Some plants don't handle damage to roots very well, and I'm an amateur to edible gardening. 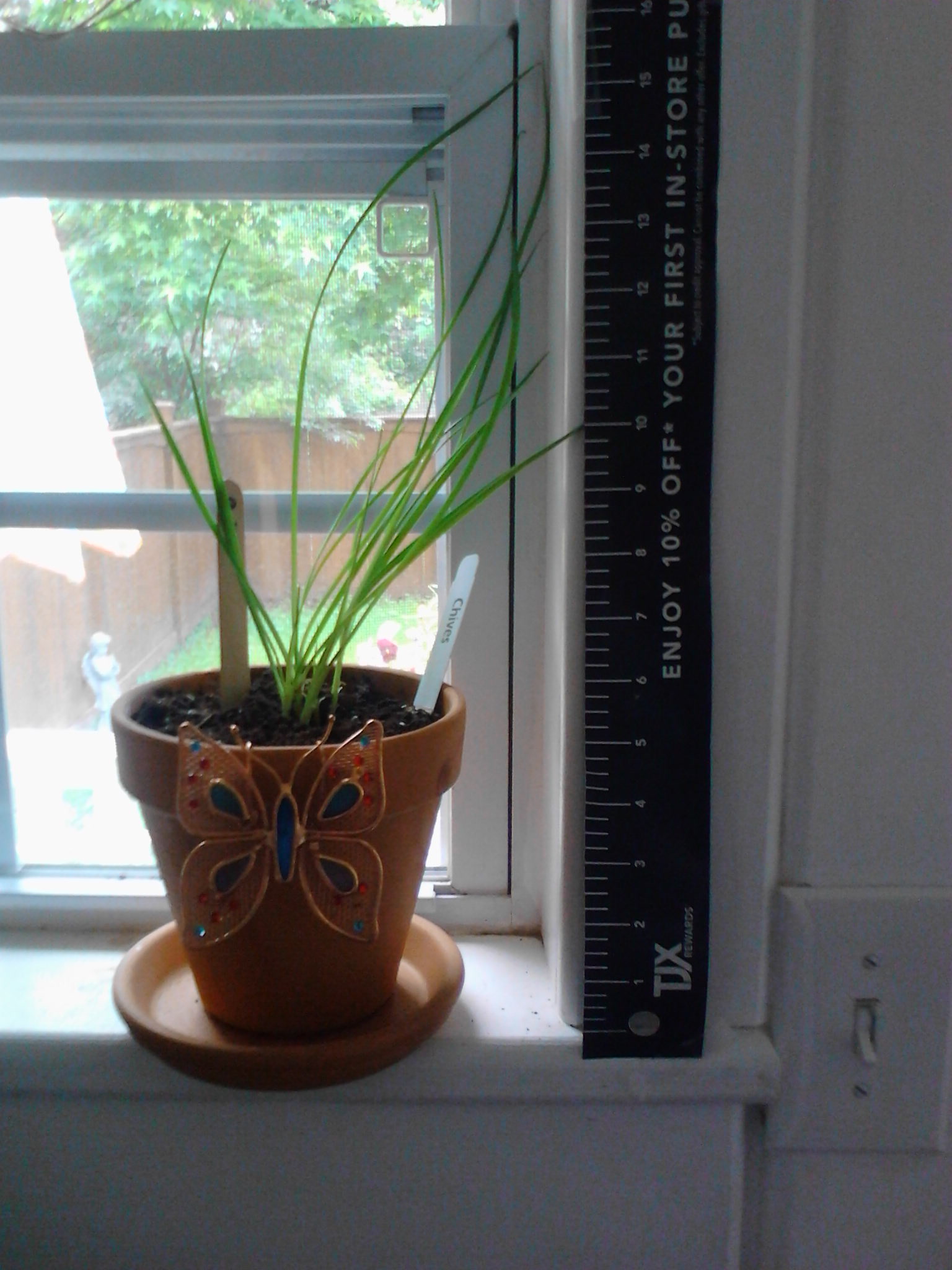 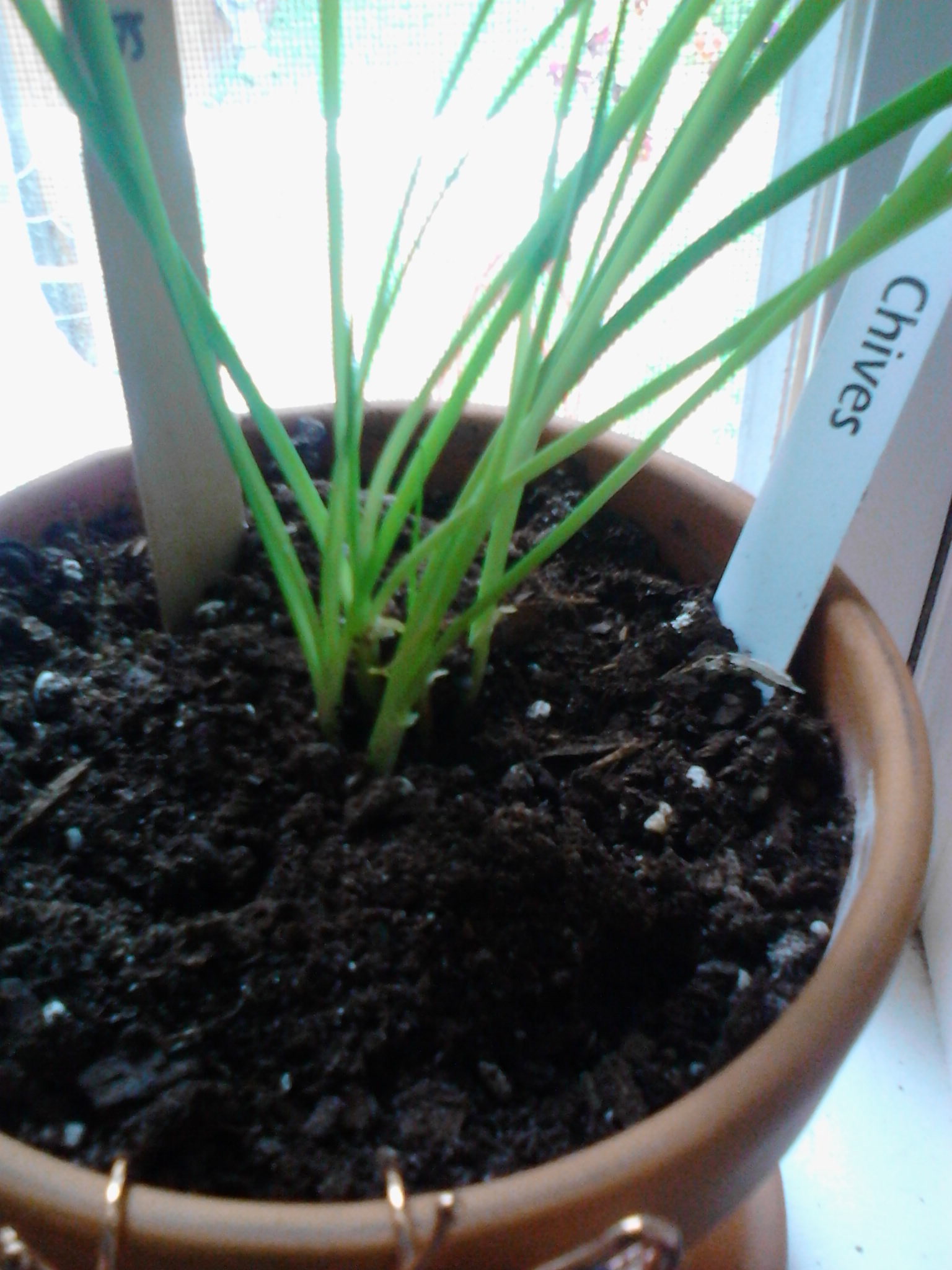 These should really be growing outdoors - the only reason they're so tall is because of insufficient light. Chives like full sun if possible, and outdoors if possible.

In regard to separating the 4 bulbs you've got, no, don't do that, and the pot is more than big enough for the small amount of chives you have. Leave them in their pot until they've multiplied to almost fill the soil in the pot, which will probably be in a couple of years, but they will do much better out of doors if that's possible.

You can snip some for use now if you like, but if you want your bulbs to multiply, and you do, it would be better to just take the tips off for use, but don't cut too much this year. You can eat the flowers on chives, but the flowered stems are tough and unpleasant to eat.

I'm also not sure about drying them; what usually happens is, just before the foliage dies down in autumn (if outdoors), its usual to cut them down, then snip the stems into short lengths and put portions in foil packets, put the packets inside a plastic bag and freeze them, so you can remove a portion at a time for use over winter. Snippings can be made during the growing season for use in the kitchen too - but you've only got 4 bulbs,and constantly removing the foliage during the growing season means the bulbs can't store food for next year, so it would be best to leave them alone till they've multiplied next year, depending how well they do.

IMHO, chives don't dry well; best just keep the plant alive all winter by bringing it in before the temperature drops below 40 degrees at night. I agree, freezing the chives is good too. The plant will do better outside, but in the winter put the plants under a bright full spectrum LED light. It will continue to produce for you all winter.

You don't have to wait for the bulbs to divide buy more seedlings or a packet of seed. Don't pick the flowers if it's outside but let it develop seeds and plant them to multiply your bounty.

Also, I take the flowers together with the stalks and fry them for a minute on each side they make a great garnish on top of other veggies or potatoes.

Not the answer you're looking for? Browse other questions tagged indoors herbs harvesting root-vegetables chives or ask your own question.

11
What are the optimal growing conditions for chives?
3
How can I discourage my chives from flowering?
4
When can I harvest cauliflower leaves for juicing?
3
I need advice about a Dipladenia (related to Mandevilla)
1
Should I give up on these Dill and Rosemary seeds?
4
Should I remove potato leaves when mounding soil around them?
6
My potato plants don't seem to flower - when should I harvest them?
4
Will chives produce a good yield indoors if I transplant them from outside?
1
Tomato plants: together or separate and replant?
2
Drying Oregano and Mint