Help me identify and save this plant

We have a plant that is not doing well... Can someone help us identify it so we can research a little bit more about it? 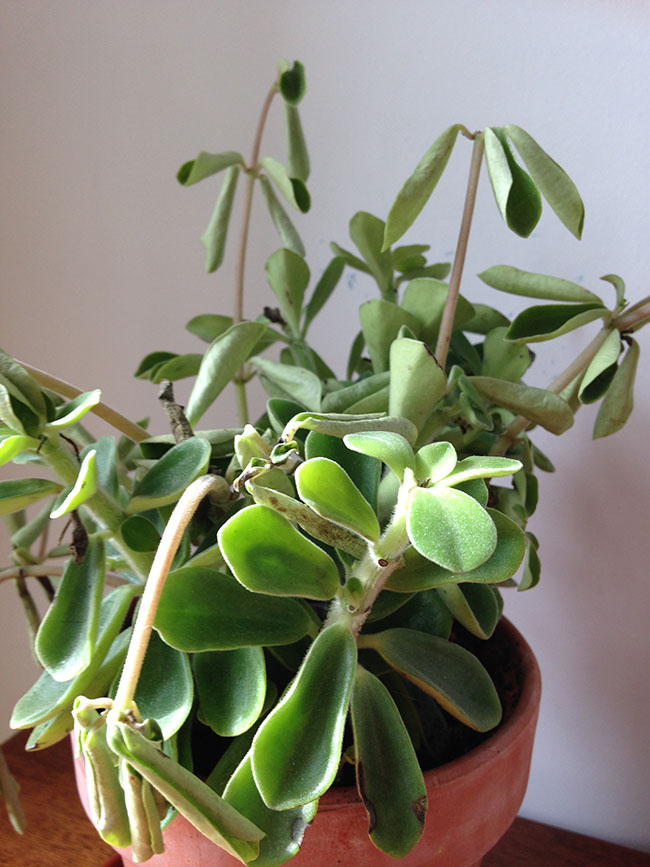 It appears to be Cotyledon orbiculata, a succulent plant, which requires some sunlight to do well, so a sunny windowsill is a good place to keep it, provided its not above a heat source like a radiator. Succulents like a reasonable difference between day and night temperatures, and like to be cooler in winter, between 50-55 deg F, no cooler than 40 degF.

Regarding watering, they should be treated as an ordinary houseplant during spring to early autumn (meaning water when the surface of the potting medium feels just dry to the touch, water well, and empty out any tray or outer container of excess water after 30 minutes). During late autumn and winter through to very early spring, though, water infrequently, roughly every 1-2 months.

They also need fresh air, so being near an open window is an advantage, though not overnight if its cold outdoors.

I don't know which of these requirements you've not managed to meet with your care up to now, but it does rather look as if its developed/developing a fungal leafspot problem, so possibly you've been over watering, or letting it stand in water? Or keeping it somewhere too cool whilst its wet, or never allowing it any fresh air? If its something you've not got right in this regard, I'd cut back the affected parts and correct your care regime - if its too wet, let it dry out for a while to discourage the fungal problem and see how it goes.

Personally I would try taking cuttings from the healthy bits that are actively growing, like the stem in the foreground of the picture. Sterilize a sharp knife, cut cleanly through the stem just below a pair of leaves, and remove the lowest pair of leaves. Dip the end of the stem in hormone rooting compound if you think plants grow better with artificial help (but they do OK in the wild without human assistance, so all they really need is the right temperature and moisture levels.) Put the cuttings in a sandy compost and make sure it doesn't dry out. Preferably, one cutting per pot, so if one starts to rot the disease won't spread to the others. They should grow roots readily from the buried leaf joints.

It looks like most of the plant isn't taking up water properly (curled drooping leaves, etc.) I would get it out of the pot and look at the roots. If they are damaged or rotting, the best you can do is cut off all the damaged parts and hope it will regenerate.

The thick leaves make me think it's a jade plant of some kind. Try the following: