Why are the lower leaves of my tropical Guava yellowing and dropping?

I had a Century Guava (世紀芭樂) shipped over from Taiwan to zone 9 California. It is nearly 6 feet tall. I planted it in the biggest container that IKEA sold, 20 inches wide, 2 feet deep. I drilled many holes on the bottom and ensured that water drains out. While the nighttime temperature was below 50 degrees Fahrenheit, I kept the guava inside near a south facing porch door. When the nighttime temperature stabilized to 50 degrees, I moved it outside so that it would get 10 hours of sunlight everyday. Daytime temperatures are averaging 75 degrees. The lower leaves have been slowly becoming yellow. The yellow leaves are dropping slowly at the rate of 2 per week. There are no pests above ground level. However, there are many small black flies living underneath the mulch, which all my other potted plants have, but those flies seem innocuous to those other plants.

At first, I thought I was underwatering it. Although the upper leaves were big and green, they had a crispy feeling, as if it would snap in half if I bent it. I increased watering to 1 gallon twice a week, enough to make water drip out of the drainage holes. However, I think tropical guava leaves are naturally drier than other fruit trees. I visited a local nursery and also felt the same dry crispiness on their tropical guava.

I only put a tiny bit of slow-release tea leaf fertilizer that my florist gave me. I also put a tiny sprinkling of Job's 4-4-4 organic powder fertilizer. I was scared of root burn on a newly planted tree, so I just put a dash of each. 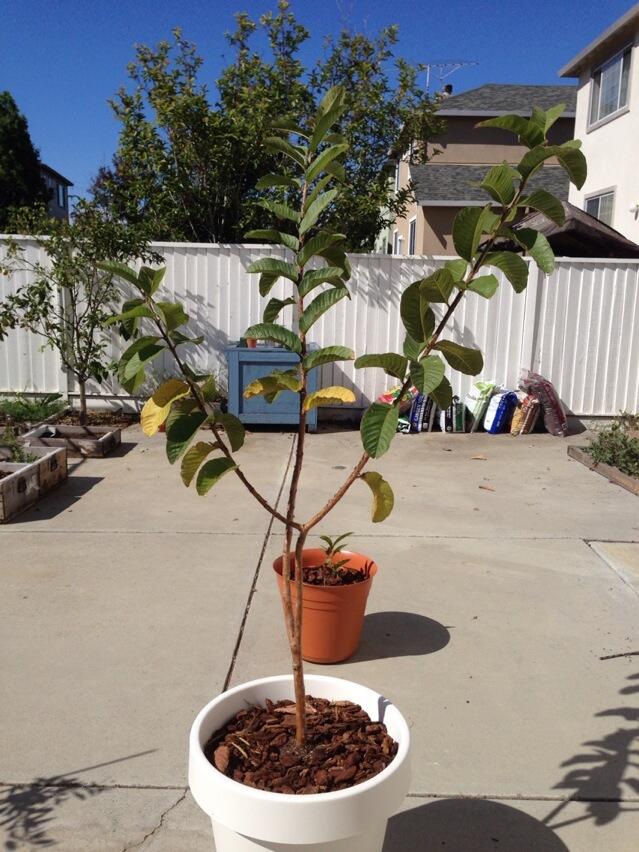 It's supposed to bear fruit like the photo below. The flesh is white and crispy. 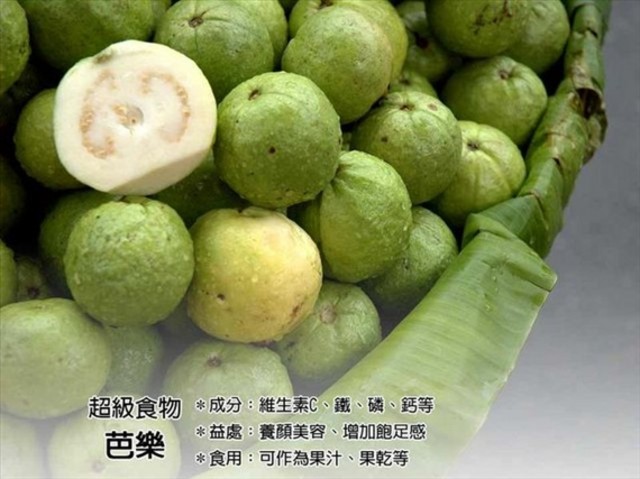 Okay, you say it was in a smaller pot and the roots hadn't filled that pot. I'm afraid putting it in a much larger pot was the worst thing you could have done if you wanted to keep the tree small. If the rootball that was present originally hadn't completely filled the pot, it would have been best to leave it in that pot until it actually needed repotting, then potted up one size, and again the following year until it ends up in the biggest pot you could find. Plants don't cope well in a pot that's much too large for them - the unoccupied planting medium tends to sour and the plant doesn't do well.

I think I'd be inclined to turn it out of the pot and check the roots, see how they're progressing and if its possible, repot into something more appropriately sized. The trouble is, you may find it now has fewer, longer roots all over the place, so you'll have to see. I'd also not use that bark topping if its encouraging fungus gnats or whatever you've got going on with the insects. Take the mulch out of the equation altogether - this will also mean the plant gets a chance to dry out a bit between waterings - they like to be well watered, but do like to dry out between waterings, not such that the compost shrinks from the side of the pot, but it should feel a bit dry to the touch when it wants watering again, and when you do water, water thoroughly.

If you repot into something smaller, I'd cut it back by a quarter or third to encourage new growth lower down the stems. As an aside, I had no idea IKEA is in the States, we have the same pots out front here in the UK - but I think you're going to need a larger one later on, at least 3 feet deep.

Not the answer you're looking for? Browse other questions tagged diagnosis fruit-trees diseases leaves guavas or ask your own question.

7
Does it matter if I cull the flower or fruit for higher fruit quality?