This is the 3rd year for my asparagus. I am ready to start enjoying it as I was told to not use until now to let the plants establish themselves. Now look the fruit is HUGE. I was hoping for a little bit smaller spears. 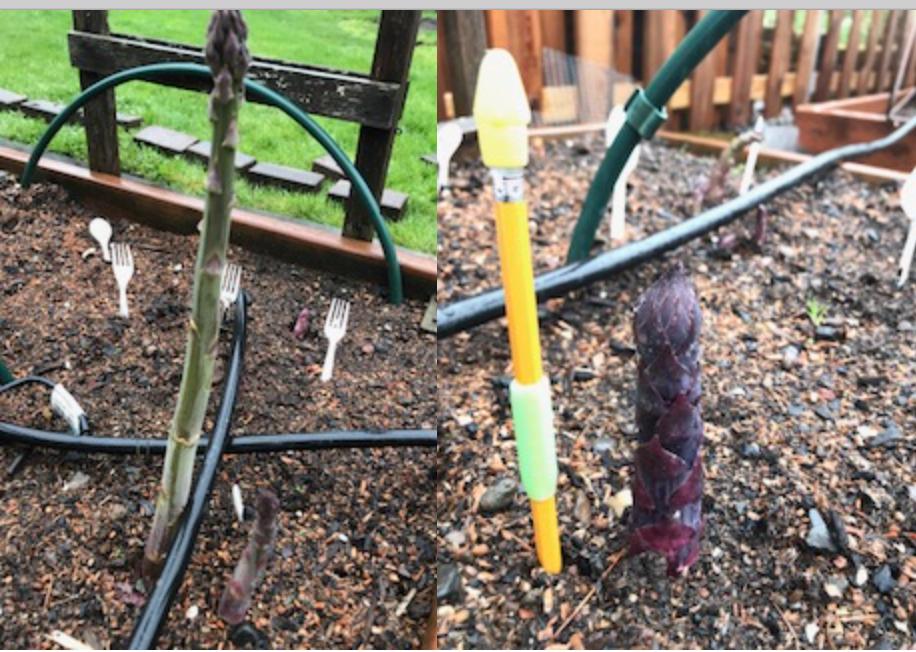 Humans have the tendency to selectively breed the plants and animals in their care, favoring this or that trait over others.

The same is true for asparagus - originally cultivated for medicinal, rather than culinary purposes, as the Latin name Asparagus officinalis indicates.

The thickness of the stalks varies between cultivars, from pencil-thin to about 2 cm / 3/4 inch. See this picture, for example: 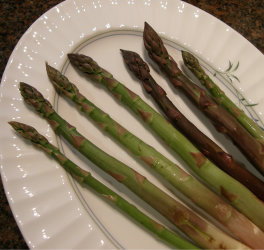 Under good conditions, the asparagus plants will always produce stalks of roughly the same size and the size will depend on the cultivar. An exception are the first years when the plants aren’t mature enough to produce the full-sized stalks and sometimes the very first stalks per season.

And there is nothing you can do about - you planted the specific breed. Changing it is like planting a waxy potato and trying to coax it into producing floury ones. The two options you currently have are

Above, I mentioned optimal growing conditions. This might get some readers thinking about how less favorable conditions may cause thinner stalks. I don’t recommend going this route. When we harvest asparagus, we are taking away not fruit, but the new growth of the plants themselves. This effectively weakens the plant and is one of the reasons that harvest should end at some time (traditionally around midsummer or St.John’s Eve where I live), to ensure that the plants can grow enough stalks that mature and produce enough energy that gets stored in the roots - needed to grow new stalks in the following season.

Not part of your question, but perhaps still interesting for you:
The preferred stalk thickness seems to be a bit of a cultural thing: Where I live, green and purple asparagus is pretty “novel” - this used to be “white asparagus only country”. In this context, the thickest stalks of the very thick types were nicknamed “Housewives’ friend”, because it was less effort to peel a few thick stalks, compared to many thinner ones - and produced less waste. And the preference seems to have been transferred to the now better available green types. I very rarely can get my hands on the pencil-thin dark green types I came across in the Pacific NW.

Asparagus tenderness depends on age , NOT size. Admittedly many cooking shows and writers do not know this. Frequent harvesting weakens the plant and subsequent stalks are small ; Grocery stores may capitalize on this and claim puny stalks are better. I have grown and picked wild asparagus for years. I once found an abandoned 2 acre farm/patch. The stalks near the easy access road were 1/2 to 1 in. diameter because of random harvest : Those further in , were over 2 in. diameter and tender IF young. With experience you can bend the stalk and only pick the stalks or tips where they are brittle and easily snap off. When asparagus grows , it shoots up several inches in a day or two. It then stays this size and develops fiber, etc for a few days before it starts growing again . You need to pick it before it develops the fiber and becomes tough. As this was some years ago I expect the planted asparagus was all very likely "Martha Washington" as that was by far, the most common variety.

Not the answer you're looking for? Browse other questions tagged asparagus or ask your own question.

13
What is a good companion for asparagus?
6
How can I control weeds in asparagus
8
What to guild with Asparagus
4
What is causing thin asparagus spears?
7
Is asparagus deer resistant?
12
What is the difference between male and female asparagus plants, and is it important for growing?
2
How do I add height to an existing asparagus bed?
6
Where to break off asparagus, when harvesting?
1
How many spears of asparagus do I get the first 2 years?
2
Why is my asparagus fern growing tall, stiff stems?