My basil had a shock after transplanting. What did I do wrong?

First a little backstory: I bought the basil at a supermarket, where it came in a small plastic vase. I kept it in this vase for three weeks. During these three weeks, I did the following:

In these conditions, the basil appeared to grow well. Got good leaves and new sprouting leaves were well established. I got a couple of slightly yellow leaves in the lower parts of some plants. This may hint at excessive watering, as I read around.

Two days ago I realized the roots were coming out the drain holes, so I decided to transplant the plants into three vases. It is the first time I attempt this procedure, so I am quite sure I did it wrong: I took the plants out of the old vase. I found out that it was basically a lump of roots. I tried to pull, and I clearly felt the roots breaking. I tried to put the lump in water to release some soil but it remained a (now wet) lump. Ok. I just pulled it into three pieces, moved each of them into a vase, where I put some new soil, the lump, and soil all around and to cover it. The new soil is pH 5-6.5, with NPK 14-16-18 fertilizer in slow release coated granules.

After the transplant (which I did at around 15:00, which means that after the transplant, the plants got only three hours of indirect light), I put the three vases (which have drainage as well) in basically the previous situation: a water buffer in a larger container, with the vases inside. The only difference is that I haven't provided artificial light, since I am using the lamp for some sprouts.

After only one day, some plants are clearly stressed and on the brink of death. 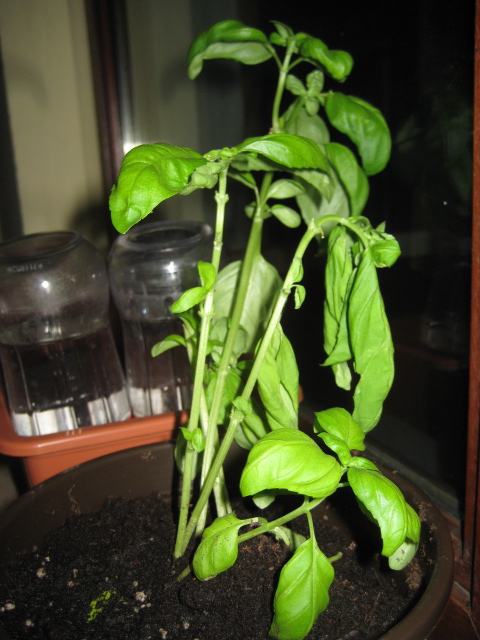 This is one of the three vases. Note how some plants appear healthy, while one is clearly dying. This happened within 24 hours.

What did I do wrong ?

That is not unexpected in the first 24 hours. Transplanting certainly induces shock to the plant and all we can do is to minimize the shock. The snapping of the roots you heard is quite common when you separate out root bound plants and as long as you weren't aggressive or remove a lot of them, they should be fine.

That said, here are some observations that might affect your plant's health.

I would suggest giving it a few more days to gauge its health (at least 2-3 full days, where it has had the chance to enjoy the sun), before concluding that its dying. Lastly, since it's pretty cold now where you are, I wouldn't suggest taking it anywhere outside as basil plants hate the cold. This could also explain a rather sluggish growth.

First of all,you should have let the plants rest, which means you should not put it in sun. You must put it in light which is enough for you to be able to see everything (not too dark and not at all bright).

Secondly, you must not prune off any leaves except those which are entirely dead, since it will only stress out your plant even more. Imagine what you would do with a sick person who has just gone through a surgery. Of course you would want to give him rest and make sure he's not stressed out in any way, right? You need to do the same with your basil plants and let them rest for two days.

Not the answer you're looking for? Browse other questions tagged diagnosis plant-health transplanting basil or ask your own question.

13
Why did my tulips die?
5
Letting basil loose. Will it die?
4
Is it too late for this tomato?
6
How can I tell the difference between etiolation and a sunburn?
6
Basil & Catnip Fail to Germinate
5
How do I grow a basil plant tall?
5
Why is my Adenium obesum wilting?
6
Can annuals work like perennials if you keep using cuttings?
5
What is causing pale discolored patches on my tomato seedlings' leaves?
2
Fall planting of blueberries in Madison, Wisconsin?