Reel mower jamming instead of cutting

I have a Brill Luxus 38 reel mower that has been in storage for about 11 years. I've cleaned it up, lubed with silicone spray, sharpened the blades and adjusted the bar the blades cut against, but after all that it still jams immediately. It cuts a handful of grass and then stops. The grass was just cut today with an electric mower, so it shouldn't be too long. Both mowers are on their highest setting but the Brill's highest is lower than the electric one's highest, so there is still grass to cut.

What else can I do to get this working? Thanks in advance!

I adjusted it using a piece of paper, since the original gauge is long gone. This is what the company I bought it from recommends (Clean Air Gardening). I also tried just tightening the bar until the blades caught on it and then backing off just a little so they just cleared.

It didn't cut enough grass to say if there are anomalies; it jammed very quickly.

I sharpened the blade using a sharpening kit sold for this mower by Clean Air Gardening. It has a metal piece that attaches to the cutting bar which holds sandpaper against the blades. I got it so the edges of the blade are mostly shiny and clean, which is what the instructions say to do.

There isn't any damage that I have noticed. I can post pictures if that would help.

I think that's all the questions - thanks!

There is a question about the type of grass - it's this "dog park mix": https://ptlawnseed.com/collections/eco-and-alternative-lawns/products/pt-767-dog-park-eco-turf-mix

My lawn is far more grass than Microclover, and is sadly not proving to be very tolerant of dog pee. I only have one dog and there are brown circles everywhere. I have started following him out with a watering can and diluting the urine as soon as he's done peeing, which he finds very puzzling.

Here are some pictures of the mower - let me know if there's anything else you'd like to see:

Overall view of the blades and cutting bar: 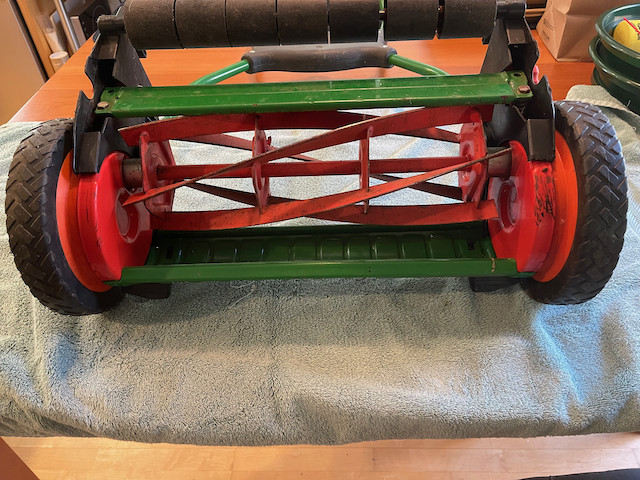 Where the cutting bar meets the blades on the right side: 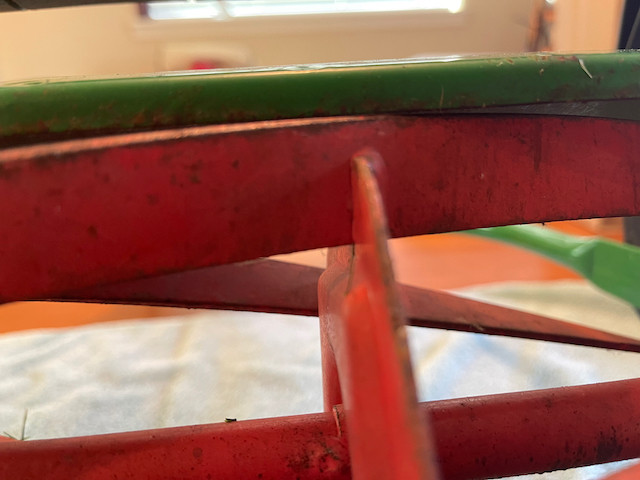 Where the cutting bar meets the blades on the left side: 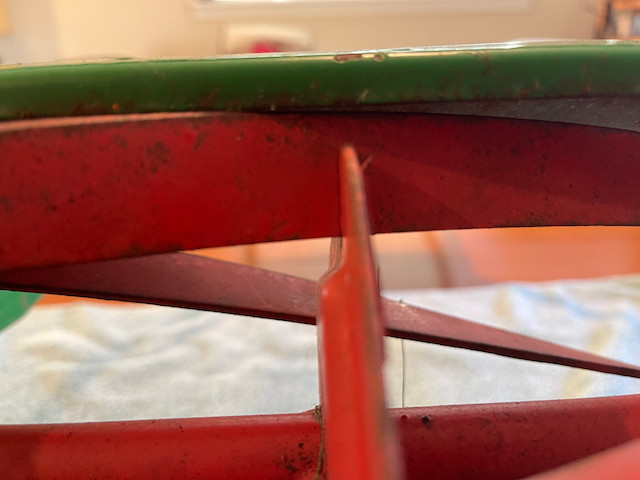 With the photos you've provided (please do edit the post so that they are directly hosted on Stack Exchange), it seems pretty likely to me that those blades just are not properly sharpened.

For example, this frame from the video: 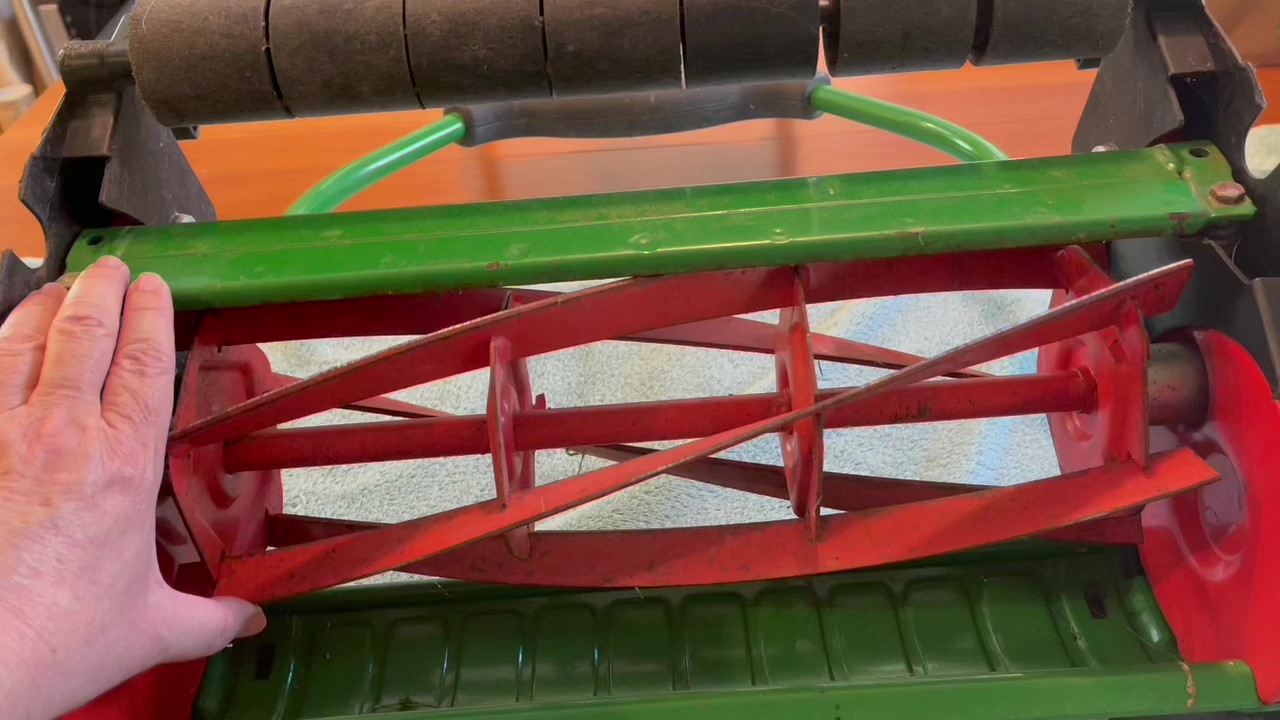 The other photos are pretty blurry, and don't really show the cutting surface of the blade (instead, the two close-ups show the painted bevel), but this photo seems representative, and one can see extensive pitting along the edge of the blade.

I would expect a correct, freshly-sharpened blade to be 100% shiny along its entire surface.

I'm unfamiliar with the sharpening kit you say you used, but using sandpaper seems suspect to me as well. Normal sandpaper will wear out very quickly if used to abrade steel surfaces. Even the heavier-duty abrasive pads that come with that kit, it's hard for me to see how one would get a fine edge using them.

Sharpening kits for other mowers typically use a "lapping compound" that is applied to the cutting surfaces to provide the abrasive effect. It is a much finer abrasive, and results in a very clean surface.

The first thing I would check is the condition of the sharpened edge. Try dragging some paper along the edge of each blade, or even a thin piece of metal, with light pressure (light enough that paper won't be cut by the blade) and see if it catches on any of the blades. I would not be surprised if there are burrs along the edge. If so, you should be able to use a steel file, again with some very light pressure, against the direction of the burrs, to remove them.

Any burrs on the edge will prevent that part of the blade from cutting properly, and could drag enough grass into the space between the blade and the cutting bar to cause the mower to get stuck.

That said, it's really hard to say for sure, without having access to the mower in person, but if this mower is being returned to service after some significant time idle, it seems possible that the mower just needs to be sharpened more aggressively. Get the blades really shiny, taking a significant amount of material off, then adjust the cutting bar so that it's nice and straight and so that the blades drag noticeably along the cutting bar. Push the mower around for awhile like that, letting the cutting bar and blades smooth each other out to refine the blade edges (i.e. until you no longer hear the metal-against-metal sound so prominently).

Maybe even repeat that exercise a few times, then finally adjust the cutting bar one more time extra carefully, making sure it has good, even contact across the entire length of the cutting bar. When mowing, there should be at least a faint sound of metal-against-metal. Not so much that it's impeding movement of the mower or causing excessive wear on the blades, but enough that you can be sure the blades are moving against each other.

Not the answer you're looking for? Browse other questions tagged lawn-mower or ask your own question.

5
Is it OK to use a trimmer when my reel mower does not work?
5
Is this normal for a push reel mower?
5
How should a reel mower be cleaned after mowing?
9
Can reel mowers be used to cut wet grass?
3
Why is my mulching mower clumping and not mulching?
4
Lawn Mower Losing Power, Cutting Poorly
5
Do people powered rotary lawn mowers exist?
0
How does a slasher mower cut?
1
How to open the motor cover of craftsman electric lawn mower?
2
How can I cut thicker grasses with a reel mower?