Common name for plants in the Taraxacum genus.

Dandelion is the common name for perennials known scientifically as Taraxacum officinale.

In full bloom, its appearance sports a yellow head of petals that later turn into white tufts of seed (pictured below). The tuft primarily consists of 'parachutes', each of which are attached to an individual seed (which are clustered at the center of the seed head). 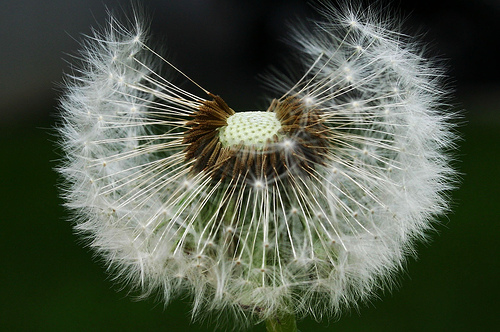 The seed dispersal stage of its life has been referenced in folklore as a conduit for making wishes. If the person making a wish can blow out all of the seed off the head in on breath, it will come true.

Removing dandelion by cutting the root one inch below the ground level. Will this work?

How do I fix dead white patches in my lawn?

What type of dandelion is this?

How do I remove dandelions without damaging my lawn?

If I just leave dandelions and clover in my lawn, what problems may happen?