Should I remove tomato “side shoots” growing from cotyledons?

Exhibit 1: One tomato plant with cotyledons; shoots in the vicinity thereof. 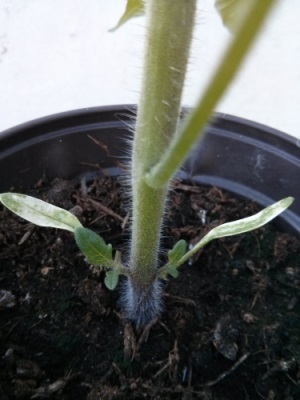 The question is simply, are these side shoots, or branches?

I think there might be some confusion about pinching out... the advice has always been, for tomatoes which produce fruits of a medium or large size, stop them by pinching out once 6-8 trusses have formed, and that means all over. It is not necessary to do this at all with smaller tomatoes, such as cherry tomato varieties.

UPDATE: I made a comment below, but decided to add it to the answer with more detail - as I said, if you're growing a cordon variety, these are grown as a single stem, tied to a support, and only 4 trusses are allowed to develop. Side shoots are removed to keep the upright shape and limit the number of trusses. Examples of cordon tomatoes are Ailsa Craig, Alicante, Craigella, tumbler, Moneymaker - there are many more, so it rather depends on the variety you're growing as to how you treat them. Note that four trusses is usual in cooler climes with a shorter growing season - hotter parts of the world tend to restrict to around 6. The other group of bush varieties need no such treatment, though some of them may need staking (such as Pixie).

Note that cotyledon refers to seed leaves rather than lateral (side) shoots; laterals may also arise from existing branches, at the ends. All should be removed so that you just have leaves which arise from the main stem - beyond 4 (or whatever is appropriate for where you are) trusses, you 'stop' by taking the top off. Later in the growing season, towards the end, as ripening goes on, if there are a lot of leaves on the main stem, many can be removed to enable less shading of the fruits.

It's hard to tell from your photo whether your tomato plant is in it's final container or you plan to transplant it again.

When growing tomatoes, each time you transplant it you;'re supposed to trim off the bottom leaves and bury it deeper than it was before. Here's a study showing that deeper transplanting of tomatoes results in higher yield. When I plant my transplants outside I trim off all but the top 2 or three branches and bury it up until that point. Any part of the plant that is underground will start to grow roots. By the time a plant was old enough to have side shoots growing from the cotyledons, they would have already been pruned off and buried.

When planted, it's common to also trim off the bottom branches to keep the leaves up off the soil to prevent splashing which could let soil borne diseases onto the plant leaves.

So, to answer your question... Should you prune those side shoots? They should have already been pruned for the reasons mentioned above.

Concerning pruning vining varieties to a single stem, I recently read a study that shows that pruning to 2 shoots with 50cm spacing resulted in more yield.

Not the answer you're looking for? Browse other questions tagged pruning tomatoes or ask your own question.

6
How to prune an overgrown (and now flowering) Dracaena?
8
Should I remove tomato plant leaves to Increase yield?
6
How should I prune my persimmon tree that has a lot of thin branches growing upward?
5
Converting Allamanda Blanchetii from vine to shrub
4
Is it time to transplant these indeterminate San Marzano tomato plants?
4
Can I remove water shoots at any time?
4
Why are some of my tomato plants suckering from flowering / fruiting branches?
0
Best way to trim this cherry tree?