Can I use weed killer to eliminate grass growing between my bulbs?

In the borders on the front of my house, I have a number of shrubs and bulbs that come up every spring. Every year, once the bulbs have died off, I dig the soil and rid it of the weeds and grass. Every year, the grass comes back and by this time of year is entwined with the bulbs such that they look a right mess: 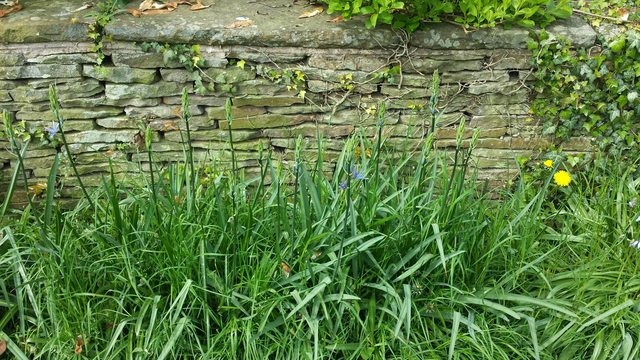 My question is, once the bulbs have died back, can I use weed killer to kill the grass and weeds off and will that solve the problem forever?

grass weeds border
Share
Improve this question
edited May 5 '14 at 14:12

After all green growth on your bulbs has completely disappeared, you can spray the weeds and grass with glyphosate. I say glyphosate deliberately rather than Round Up - Round Up contains other ingredients which make it more dangerous in the environment, but you can buy a bottle of neat glyphosate from somewhere like Wilkos fairly cheaply, and mix it yourself, adding a little squirt of washing up liquid to the mixture. Works out much cheaper and is less likely to harm other life forms, including you.

However, that doesn't mean the grass won't be back, you may need to carry out more treatments during the summer and the year after to get rid of it. In the situation pictured in your photo, it's possible you have couch grass with roots under that wall, which is probably why digging it out has been unsuccessful - you can't get at those roots and it just spreads back out. Glyphosate works 'through the green' so to speak - the more strongly the plant is growing (grass, in this case), the more effective the treatment will be, so don't use it during periods of drought or very late autumn and winter. There is one caveat - glyphosate binds to soil particles and is present for some weeks, and there is some evidence that crops such as carrots did absorb glyphosate from treated ground post treatment. However, this is less likely with your bulbs - once the foliage has died back, the bulb is returning to dormancy, and by the time it starts growing again, any glyphosate in the soil should have disappeared. If, though, some of the bulbs are daffodils, their roots start growing in August, so I'd avoid treating that area much past the end of June, just in case they absorb the glyphosate. Other bulb roots start growing later in the year.

Not the answer you're looking for? Browse other questions tagged grass weeds border or ask your own question.

6
What should I do about coarse, thick grass growing in my lawn?
13
What is this weed and how can I eliminate it?
2
How long until I can over-plant grass seed after spraying Weed b Gon
10
What do I do once my weeds turn brown?
4
I live in the country and have no grass growing. My land looks like a field and I have no experience
1
What are these weeds and how to get rid of them?
3
How can I clean up my lawn from weeds? What kind of weed is this?
6
How/When to Remove Dead Weeds and Reseed Lawn?
2
What is this awful leafy plant that's taking over my lawn, and how to get rid of it?
2
Shade Forest Ground Cover