I've had this Venus Flytrap since about 6 months. It was in bloom when I got it (for some reason shops like to sell flowering plants). I read that flowers take a lot of energy from the plant, and since my Flytrap started deteriorating soon, I did cut out the flower, and the flowers that came after it.

Soon the Flytrap died back even more, it grew a few new traps, but then it was mostly gone.

I also read that they can do that in winter, so I didn't worry too much yet, and kept watering it (not too much) and waited.

After a while, it started to grow new leaves, but without traps. If you look very closely, you can see just a hint of a very tiny withered trap at the end of each leaf.

I cannot find any reference to this behavior. Is it normal? Is there something I can do to make it grow real, working traps again?

In comparison, my sundew, which should have a sunny spot as well, was bought at the same time, and seems to be flourishing. It has nice sticky droplets and it catches many fruitflies and other small flies. 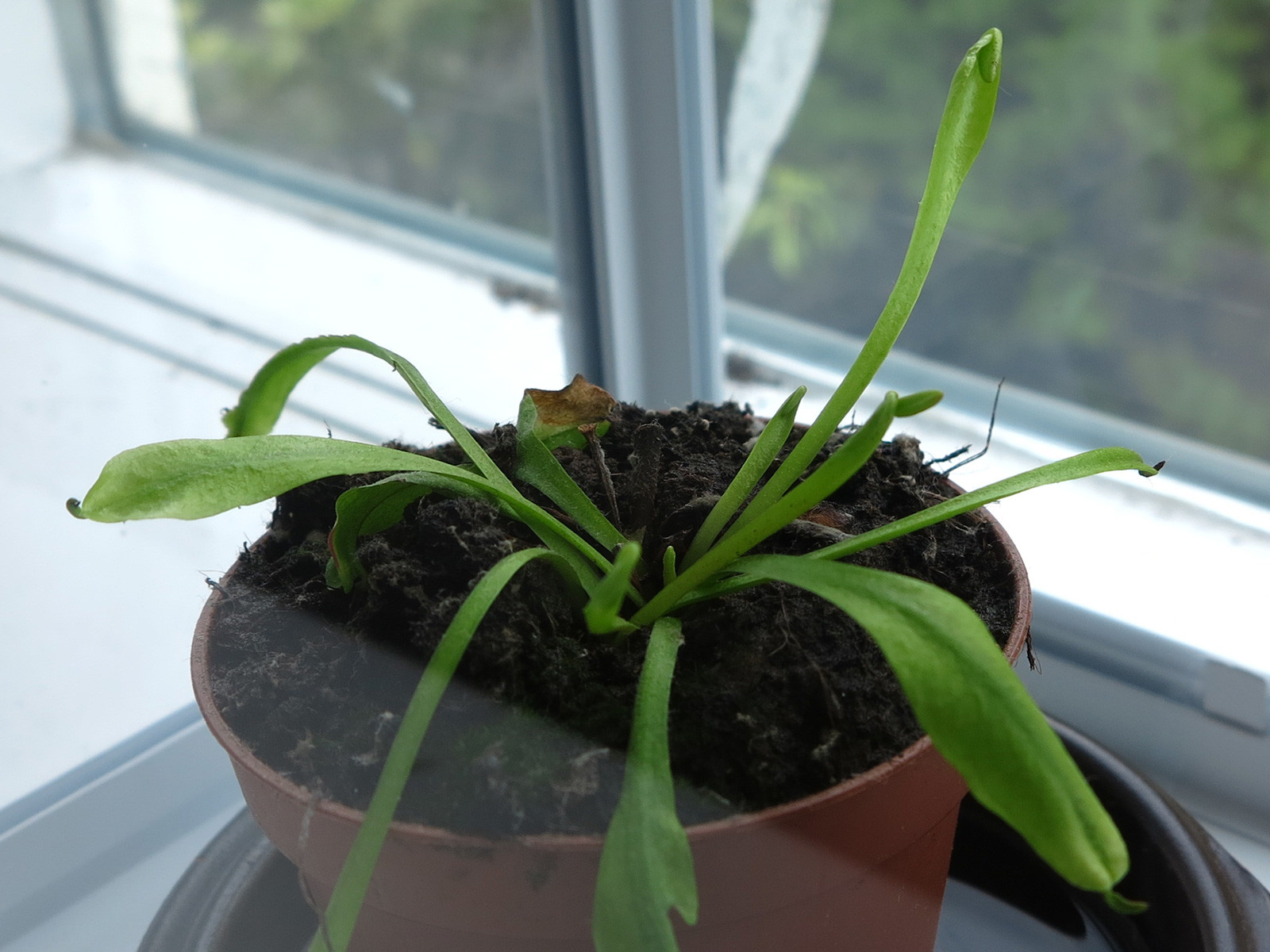 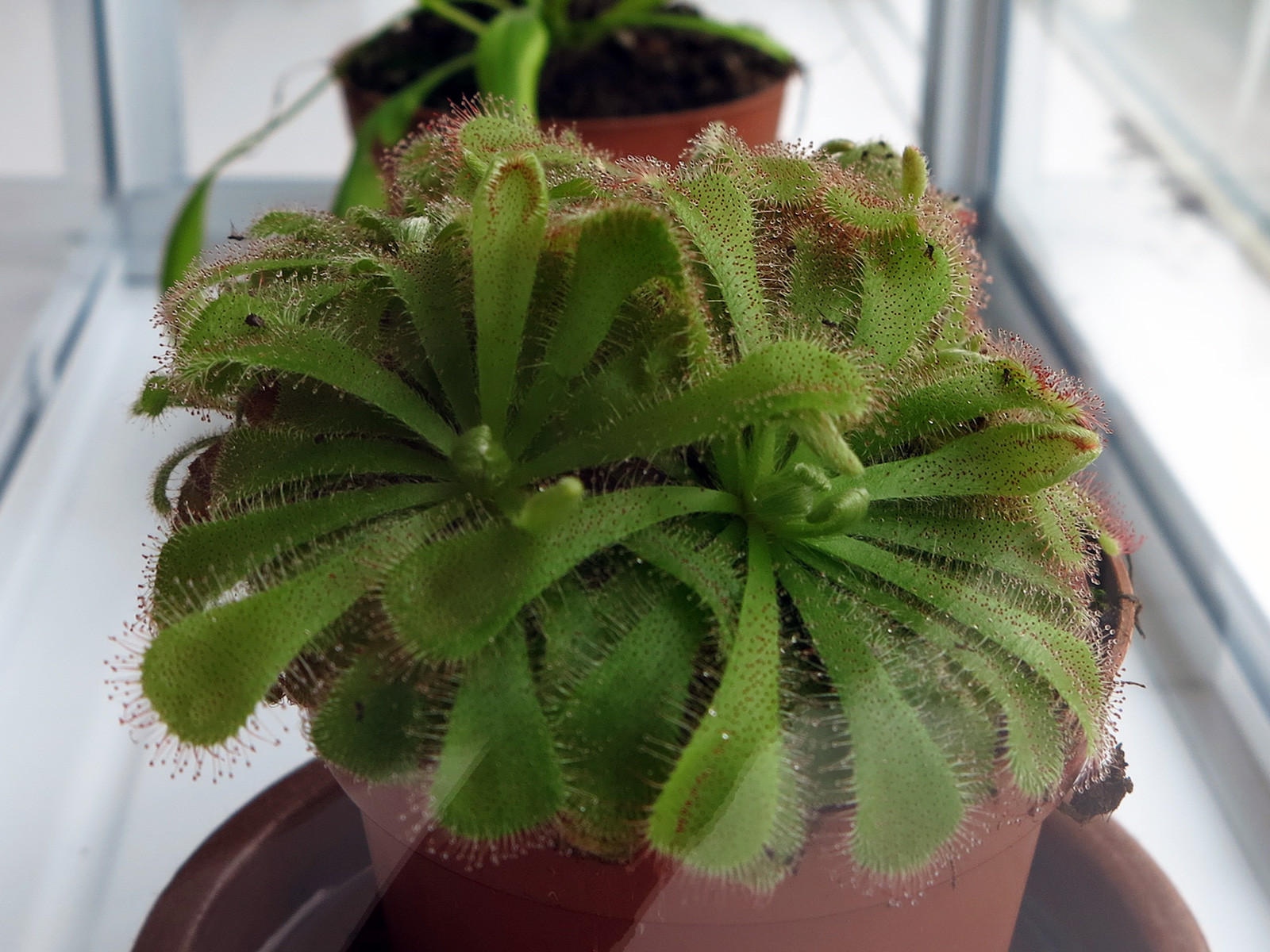 The sundew, doing fine, so it seems.

Thanks in advance for any insights.

Following the advice TeresaMcgH gave in her answer, I've investigated the lighting conditions, and although it is a very bright spot, the plants get hardly any direct sunlight.

I did some reading and apparently the Drosera thrives in lots of direct sunlight as well, and its leaves should be reddish. A Drosera that is mostly green is also a sign of too little light. Since mine was pretty green, I took that as an extra confirmation that Theresa was right.

I've moved both plants to the other side of the house, where they will have direct sunlight for about 5 hours until about 2PM and still a lot of daylight after that.

Well, it seemed that during spring (more light), the stub-traps were already slightly larger, but the first new leaf that unrolled since I moved the plant has grown an actual trap. It's not very big yet, but at least it's a complete trap that actually opened. I've got good hopes for the future! :-) 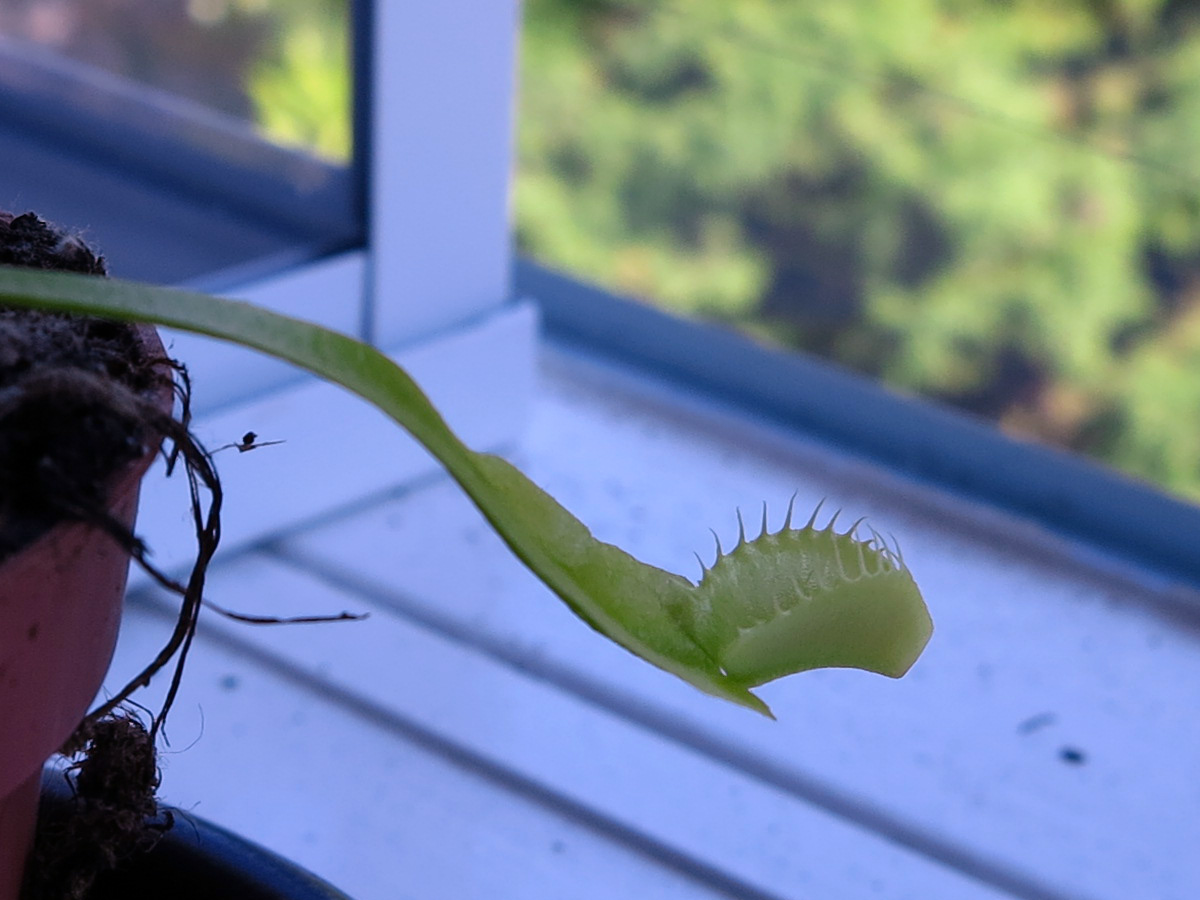 I think I can consider my plant saved! The difference the new spot made is far greater than I could ever imagine, but look at this; A bunch of new traps, a couple of which caught some insects when I put the plant outside during a sunny day. Lots of new traps in the making. Instead of just pale green, the traps have hints of red on the inside and outside. 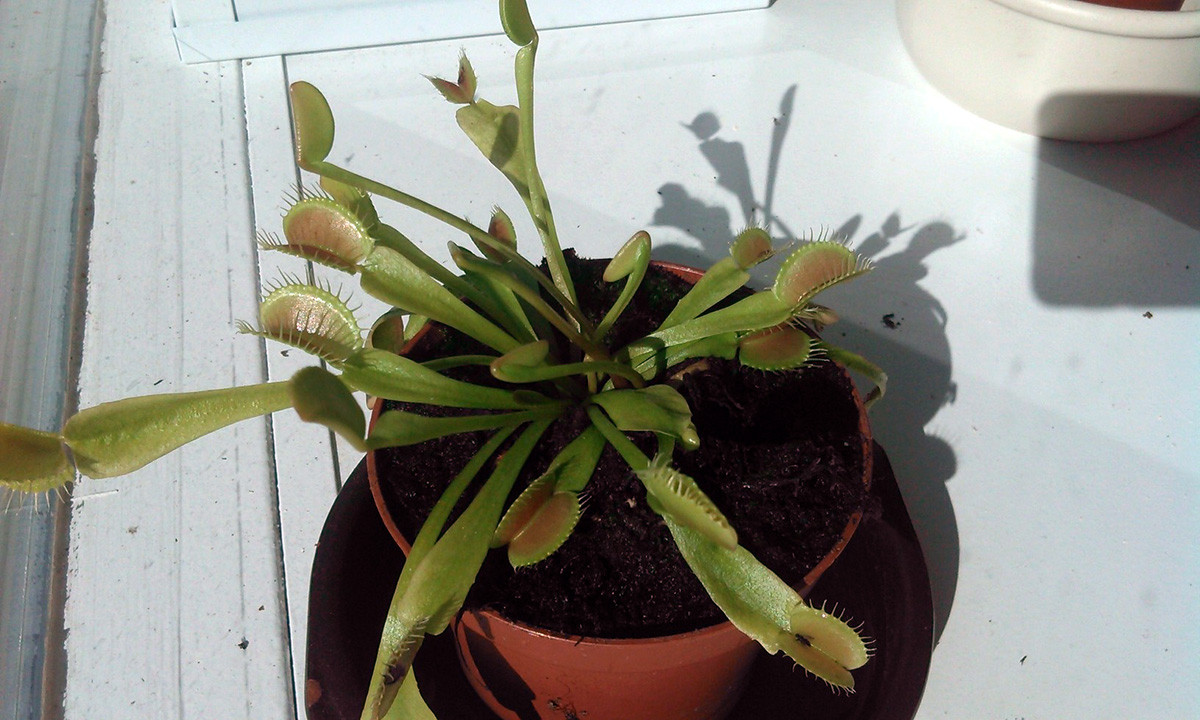 I notice the same effect on the sundew. It's as full as it was before, but it completely changed colour. Now, the weather has been extremely sunny here in the past two months, but still I wouldn't have expected this to have this effect so soon. 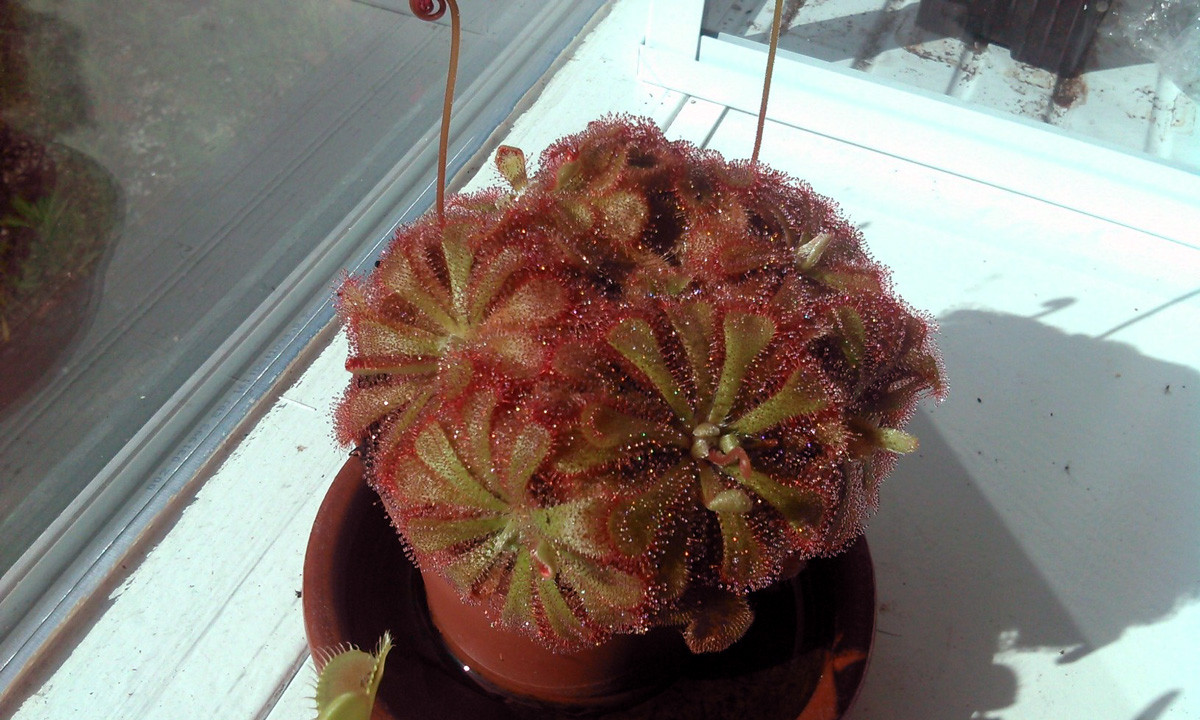 I hope the updates don't bug you (this might have been the last one), but I think this case should convince anyone who would have any doubts about the effects of (more) sunlight.

I've moved the plants outside a couple of months ago. At first I kept them in the same pots, which worked well and they flourished. But after a while I moved them together to bigger 'pot' of peat. I thought this would make it easier to keep them moist. By that time, both the fly trap and the drosera (Alice Sundew, I'm guessing now) were grown big enough to be divided. In the bottom-right of the picture you can see half of the fly trap. The other half is hiding at center top. The one on the left is a different plant I added later. The drosera is divided and individual rosettes are spread around the bin. I've added some other species as well (drosera binata, drosera albino (?), two types of sarracenia and a nepenthes. 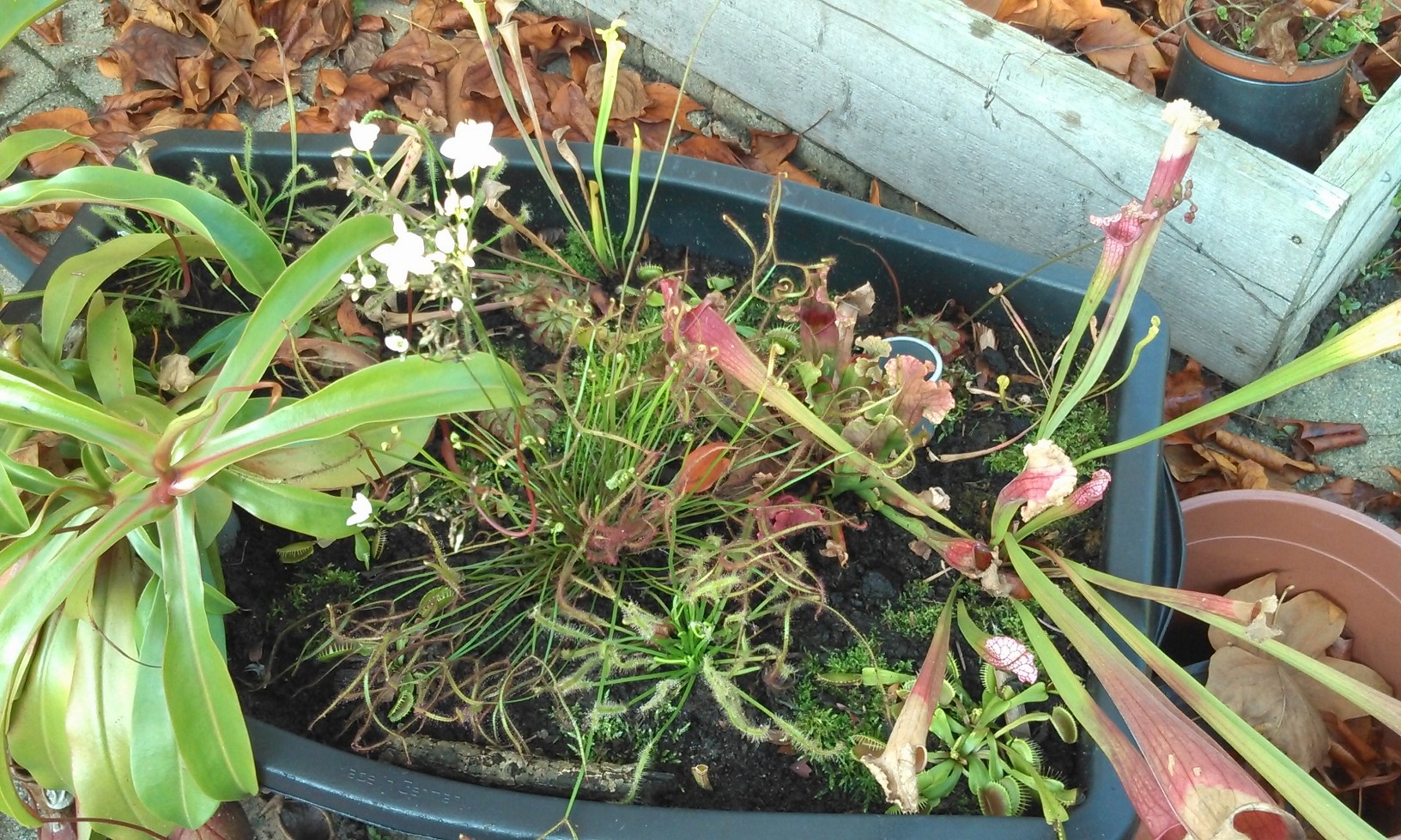 So far they are doing well, and I hope they'll make it through winter. I'm not sure every one of these species can handle frost, so I think I'll move the whole thing indoors before that time. Anyway, it seems like the plants are doing even better outdoors. I'm saving up for a greenhouse, and I guess that will certainly unlock some new possibilities. :)

Here are some tips for coaxing your plant back into healthy condition.

Basically it needs at least 4 hours of sun per day, well drained but moist growing conditions, and it is recommended to water it with rain water or other low mineral water.

1
Does soil need to be acidic for carnivorous plaints (droserae)