The background for this is here. The short of it is that the sod guy laid this down last year, and I have a feeling he skimped on the job. Didn't prep the soil, just came and laid the crap down and left. 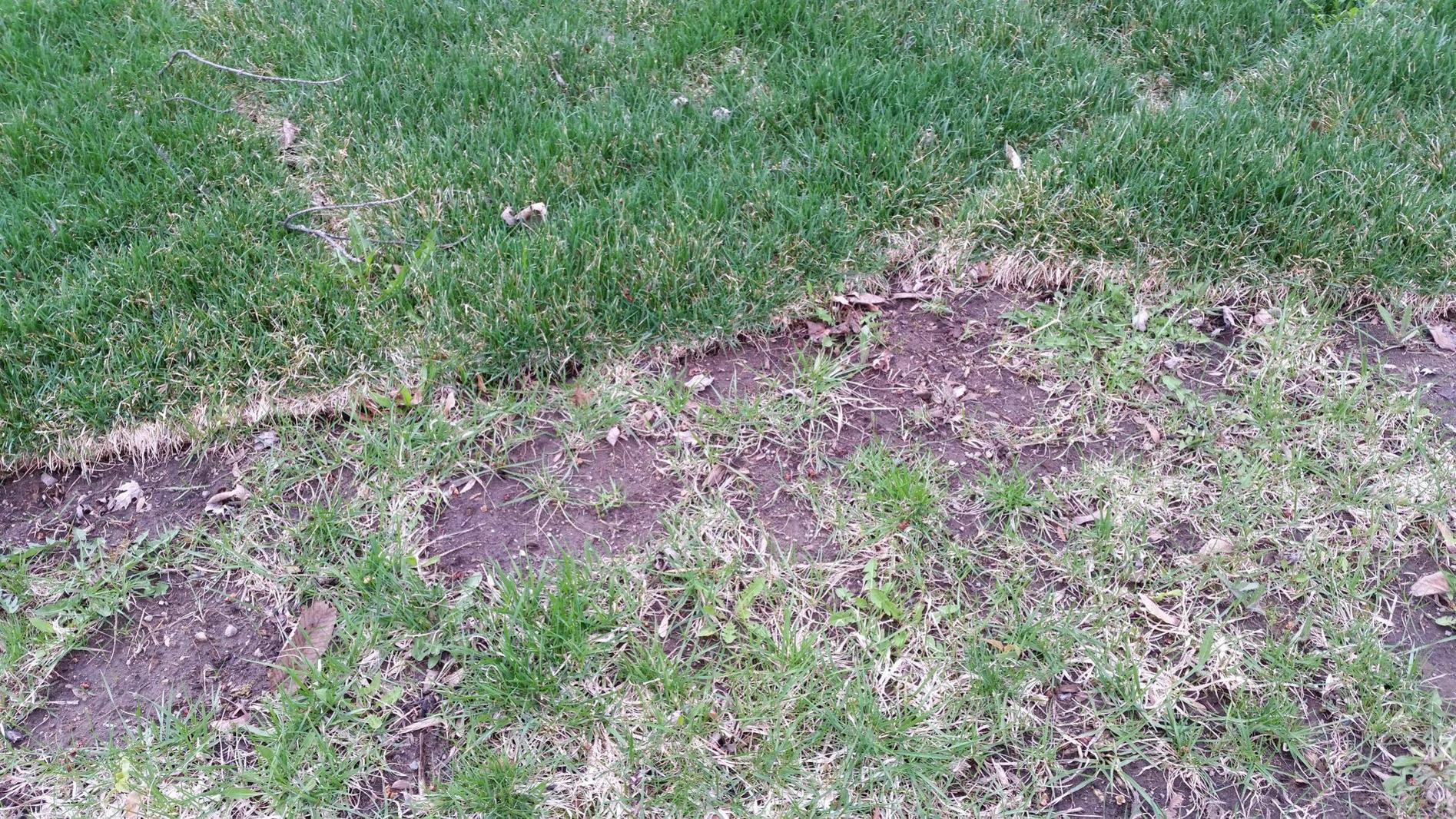 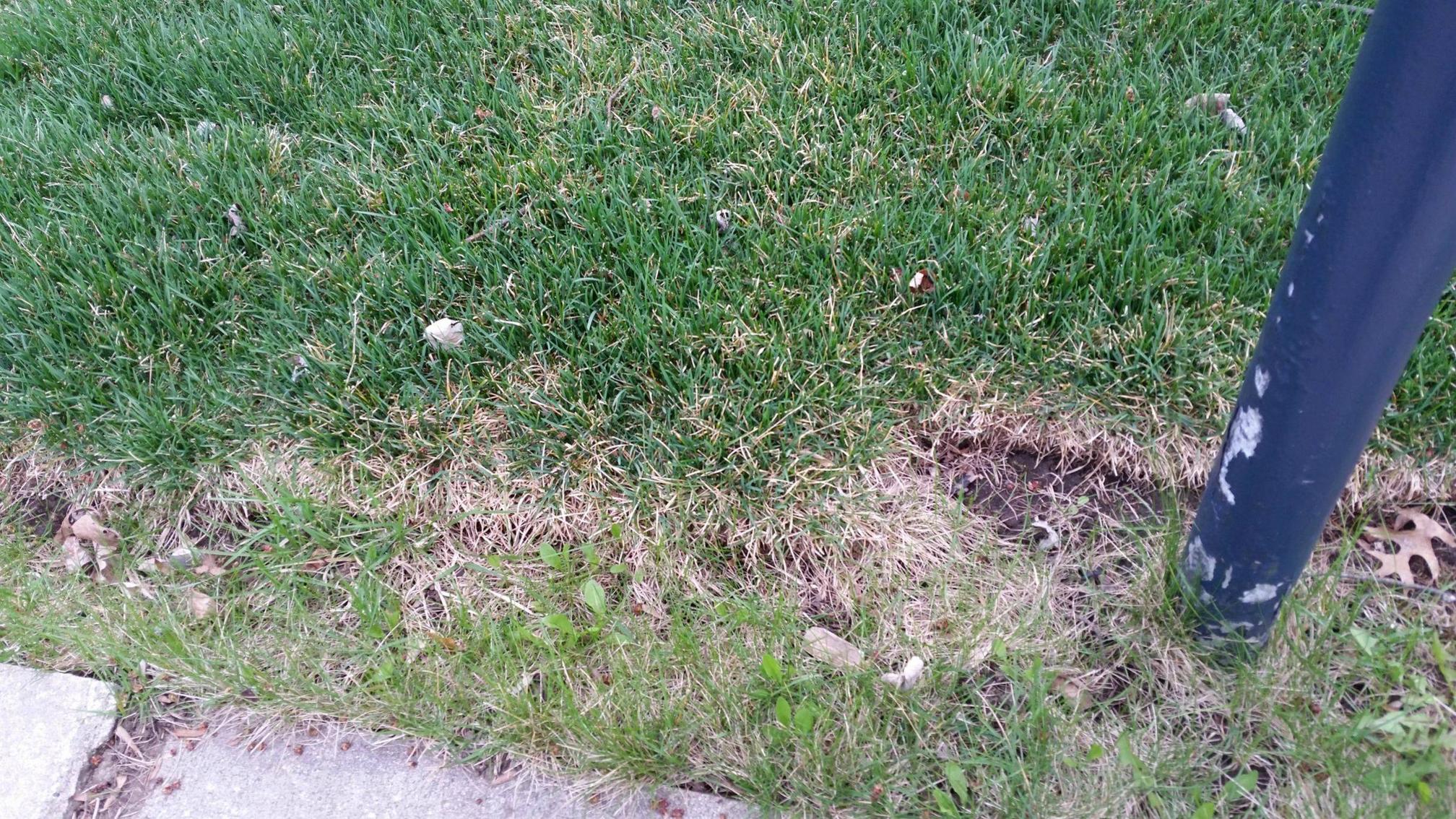 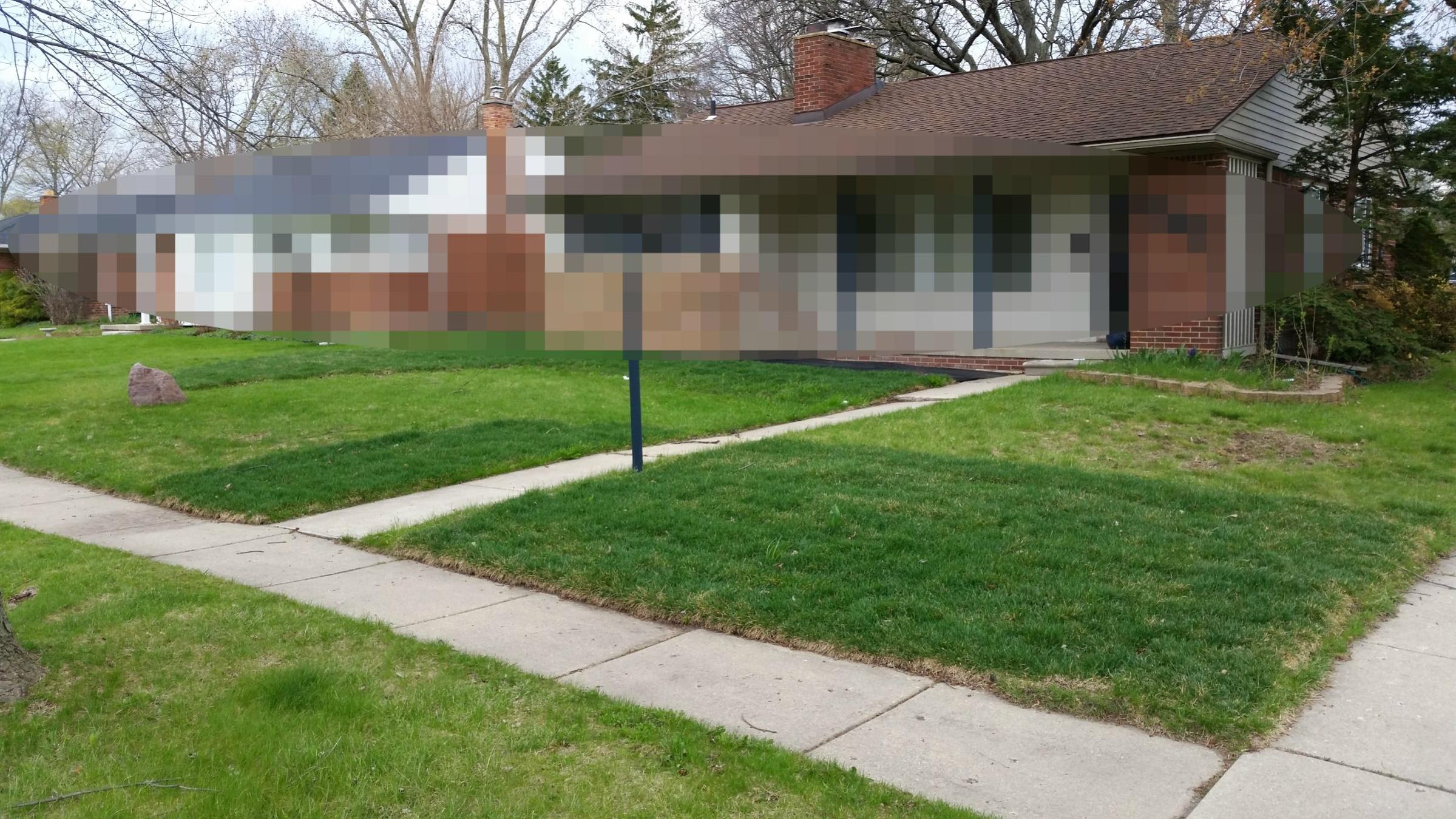 I talked with him immediately after I saw it. He informed me it needed time to settle. My lawn is clay with little to no nutrients, I doubt it's going to 'settle', but I don't do this for a living. These pictures were taken yesterday, the sod was put down just before winter, Oct. 2013.

I have a couple of questions:

Will the sod settle down with the existing lawn?

Sod does settle a bit but it's normally rolled after installing which does most of the settling. It may settle a little more but not much considering it's already been down for months.

The roots of the sod should already have worked themselves down into your existing soil. See if you can lift up a corner of the sod. If you can then the roots haven't grown into your soil and you may want to consider removing it, prepping the soil properly and putting it back.

Did the installer do a poor job?

That's hard to answer and what really needs to be determined is if the installer did the job you paid/instructed him to do. Normally when you hire someone to install sod over existing grass they're supposed to remove the existing grass, amend the soil with organic matter (compost) and fertilizer, then install sod and roll it.

Based on the pictures and updates in the previous thread it looks like you're the one that did the clearing. That may have led the installer to think the ground was completely prepped. Did you clarify what exactly you wanted him to do as far as soil prep? If all you told him to do was put down new sod then he did what you told him to do.

What should you do now?

In your previous question you asked about only sodding a portion of the lawn and I replied:

Just to clarify so we're on the same page. I would never sod or seed just a portion of a section as I had defined it. As I mentioned in the other thread there are so many different types of grass seed that if you don't know what you have chances are there will be a noticeable difference in the two. If you can't do the whole thing I would recommend splitting it up like I did, front and back.

If you had followed that advice you wouldn't have had the issues you're having now. I would have done the entire front lawn so everything was visually consistent.

To give you an idea of how much the appearance can vary between different cultivars of KBG can differ, here is a photo of some different KBG test plots at Penn State (source: Applied Plant Population Management). They're all Kentucky Bluegrass. 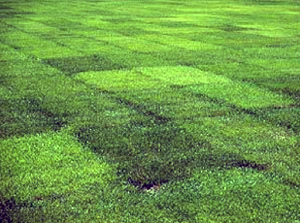 Right now you can either rent a sod cutter and remove the rest of your front lawn and lay more sod purchased from the same sod farm that is the same type of grass or you can seed.

For seeding... Find out where the sod came from. Call the sod farm and find out what grass seeds they used were for the sod you have. Maybe they'll even sell you some. Spread some top soil in a 2-3' band where the new sod meets the old grass and use the back of a rake to smooth it out so that the transition isn't as drastic. Spread a 1/3" layer of compost over the entire front lawn (1 cubic yard per 1,000 sq ft) then overseed the old lawn. That should help minimize the difference in appearance a little but you'll likely need to overseed a couple more times to really minimize the difference in color. Overseed again in the fall and next fall.

Looks a right mess, a bad job indeed. The usual procedure for laying sod is, as you mention, soil preparation first, so that would mean digging over, raking off any debris, removing any weed roots, levelling off, then walking all over it on your heels to get out soft spots, re rake/levelling and then laying the turf (sod, we call it turf here...). It is, though, very difficult to get turf added to existing lawn to be at the same height - naturally, after the preparation process, some settlement takes place, so its possible that the new turf will be laid slightly higher than the rest to allow for that. However, it seems your guy made no preparation - what he's done is just lay the turf on top of unprepared soil, and that is never going to match up with any other lawn you have.

I can't see the whole of the lawned area, but if the pre existing lawn isn't large, and if the sods he laid last year are growing healthily, then the easiest thing to do would be to import some topsoil from somewhere, spread it out over the area of the old lawn, till its at the height of the newer turf, then seed it with grass seed, assuming you can get that kind of seed wherever you are. Seed needs loose, friable soil to germinate, to a minimum depth of 2 inches, so if there are areas where the topsoil won't be 2 inches, you'd need to scratch up the surface of the existing lawn to create that.

There are problems with seeded lawns though - they need frequent watering after germination, must be cut with shears the first couple of times (though a hover mower you'll get away with, other mowers rip out the roots) and cannot be walked on or used normally for 3 months. This may not matter if the area is small, but may be an issue if its large - in which case, I'd take the lot up, dig it all over, doing proper preparation, buy more sod/turf and lay it properly... or take up and prepare the pre existing areas and lay new turf there, though then you've got the problem of trying to work out how much settlement will take place to get the whole lawn (new and the turf laid last year) at the same height. There's no quick, easy solution to this one.

UPDATE: Already responded as a comment, but if you're able to, or know someone who can, it should be possible to cut out the new turf, lift and roll it, then prepare the areas beneath properly, and relay the turf at the right level. You'd need to do the job quickly, within a day or two, once the turf has been rolled, unless you have somewhere you can lay it out in the air and keep it watered till you need it. Again with the caveat that settlement might mean it's not level after a few months...

P.S.: If you're going to have a crack at it yourself, but not entirely sure how to do it, buy yourself a copy of The Lawn Expert by D. G. Hessayon - I just checked and its available via Amazon.com around $13... worth every penny (or cent, in your case!)

2
Can you plant sod on top of old grass if you lay a layer of top soil down?
9
How do I fix the worst lawn on the street?

32
Can my lawn be saved or is it time to dig it up and re-sod?
2
Laying down Fescue sod in North Carolina in Late October. good idea?
9
How do I fix the worst lawn on the street?
2
Is it common to only sod a portion of a lawn?
4
Can I lay new turf on an existing lawn?
6
Can I Till Existing Grass Before Laying Sod?
3
Yellow spots appeared in my lawn suddenly although all other area is green
4
Caring tips for a new lawn
1
Laying sod at different times
1
Laying a raised lawn above a concrete slab