What is this dark purple discoloration on my Apache Blackberry?

I bought a young Apache Blackberry plant in a 4'' container. I transferred it to a gallon glazed clay pot. I use wood chip mulch. It has been around 2 months and the leaves are getting much bigger, but there has been hardly any vertical growth. It is 6'' tall now. It sits outside (zone 10) and gets 10 hours of sunlight.

I noticed that dark purple spots are showing up on half of the leaves. I see no insect pests. Is this discoloration a cause for my Apache Blackberry's slow growth? 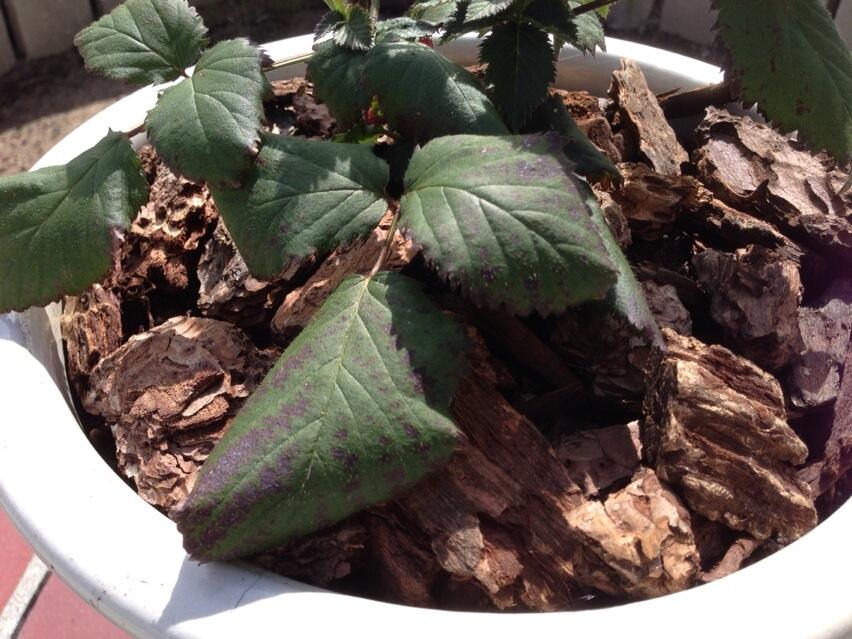 Supposing it's just a few of the larger leaves, I wouldn't be too concerned. In fact, there are some seasons when my raspberry bush will grow clusters of purple leaves or tint some of the newer-growth leaves a dark-red. I've been told that it can be attributed to a) nutrient deficiencies (typically of phosphorous, magnesium, or iron) or b) changes in temperature. I did notice that after adjusting some of the soil nutrients that the plants returned to all green leaves.

Nutrient problems are tough to diagnose, but thankfully they're unlikely to wreck a complete plant if treated quickly. I would first look to phosphorous, then magnesium.

If there is some texture that differentiates the spots from the rest of the leaves, you should look out for something called blackberry/raspberry rust. It's not terribly common, but it too will cause discoloration of leaves.

No, no, no. Don't spray to test for problems. That isn't a fungus...probably sunburn. You have to know the insect or bacteria or fungus before you decide to spray. Get rid of the chunky non-decomposed mulch. Slugs, decomposers, love that environment and you will need more nitrogen to satisfy the decomposers and your plant. Did you test your soils pH? Always test before you attempt to change the pH. Potting soil with slow release fertilizer should have been enough. Was this plant purchased from a nursery? Was it 'hardened' off before being put outside? What was the fertilizer you used? What were the numbers...the NPK ratios?

A gallon pot isn't big enough - this plant does much better in open ground, but put it in a much larger pot if planting out isn't possible. You also will need to think about how to support the topgrowth once it gets going if its in a pot...

The brown patches might be sunburn, but the slow rate of growth will be the lack of root room. All this might be a bit late now, though - I see your question was posted back in March...

Not the answer you're looking for? Browse other questions tagged fungus blackberry or ask your own question.

4
Can I tilt a plant when transplanting it from a pot to the ground?