What is this thorny leafless tree with lumpy yellow fruit?

A friend has this thorny green tree. It has some sort of yellow fruit but there are no leaves at all on the thing and it has thorns all over it and it's getting bigger. She lives in the Algarve in Portugal, and she would like to know what it is so she can decide whether to leave it or take it down. 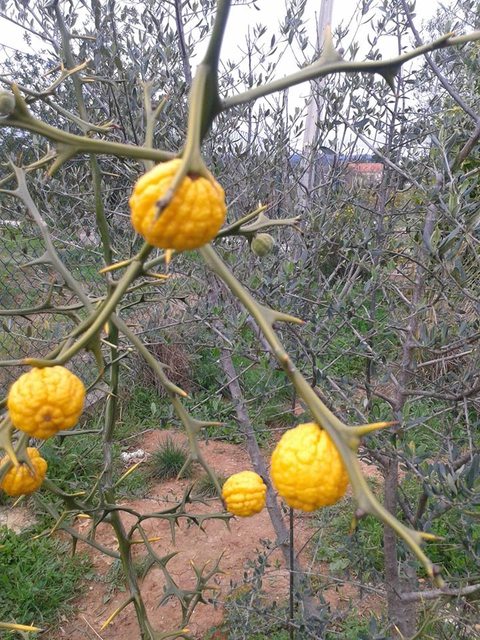 It's probably trifoliate orange/hardy orange (Poncirus trifoliata, or, depending on which plant taxonomist you talk to, Citrus trifoliata), although the fruit looks rather weird, so perhaps it's a hybrid with another Citrus species. Have your friend cut open a fruit -- it should look like what you'd expect a citrus fruit to look like inside)

Trifoliate orange can be pruned into a somewhat attractive specimen plant: 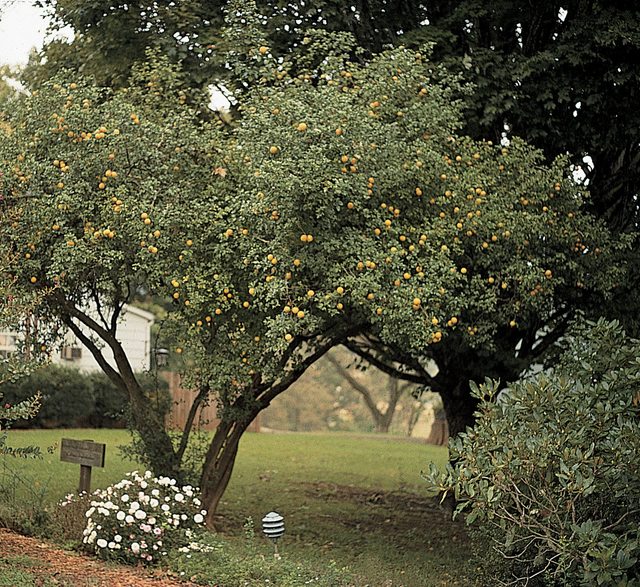 but it's likely to be extremely nasty work, as you can see from your photo, and typically it just grows into a great blob of horrific thorns: 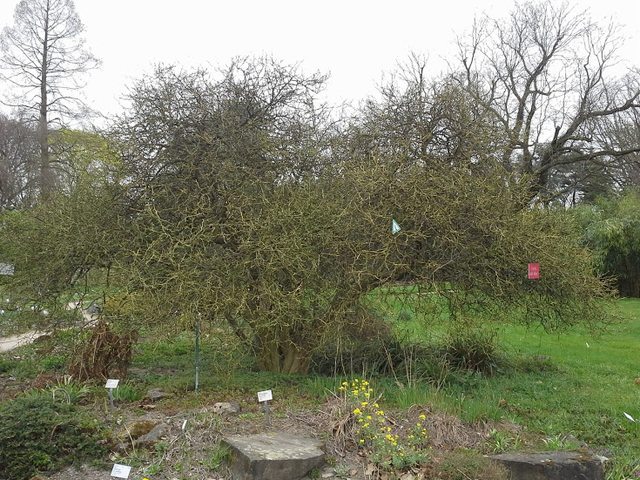 Trifoliate orange is native to eastern China and Korea, and, at least in the southeastern United States, it spreads relatively well by seed and can sprout into dense thickets, and it is becoming somewhat of a pest (and by dense thickets, I mean "can replace fences around highly secure areas such as airports and nuclear facilities" thickets). I'm not sure how it grows in a hot, dry Mediterranean climate, so maybe it is better behaved there. Still, if it was on my property, I'd collect a bunch of the fruit and try to make marmalade, maybe keep a sprout or two to experiments with as a potted tree, then dig up the rest with extreme prejudice.

Possibly Maclura pomifera, but seeing the leaves should confirm or deny. Otherwise, cut one of the fruits open - should be whitish stuff like latex inside with seeds ringing the edge towards the outside, though some changes to the interior appearance may have taken place given they're old fruits now. The fruits start out green, but turn this shade of yellow in winter. If it's that, seeds are edible, much liked by squirrels.

17
Why does my lime tree drop its fruit early?
6
Is my dwarf orange tree too young to bear fruit?
3
What was this large yellow-green fruit I ate in Ethiopia?
7
Can anyone identify this seed/fruit and what tree it has come from?
6
Why has my orange tree turned yellow and stopped bearing fruit?
7
What is this tall tree with narrow leaves and sweet red fruit?
5
What is this tree/bush with thorns and small blue solid fruits?
5
What kind of tree is this and what should I do with it?
1
What is growing out of my raspberry bush?