How to remedy die-off of lower and middle branches on my plum tree?

I have a plum tree that is not doing well. It is situated alongside a dirt road which gets regular (but not heavy) traffic. There's not a lot of wind, and the sun shines on it for about half the day.

For the last 4 or 5 years, the branches on my plum tree have been growing in a strange pattern. Every year, there are three zones: 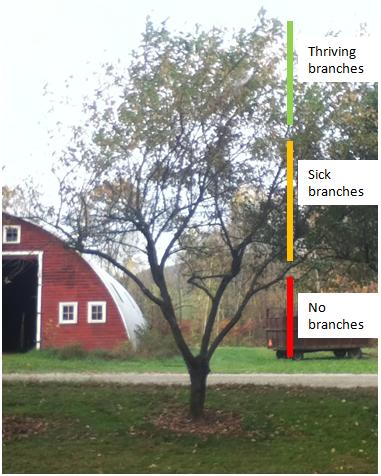 The sparse nature of the middle zone is hard to see in this picture due to the background trees and the poor camera/photographer (I include a close-up below). In reality the tree looks pretty goofy, because the majority of the leaves are very high off the ground.

Every year it seems the bottom zone gets taller, and the middle and top zones start a little higher off the ground.

Here's a description of the three zones:

The trunk and the thick branches in the bottom zone have lots of lichen. They also have some cracks in the bark which expose orange/yellowish streaks, like this: 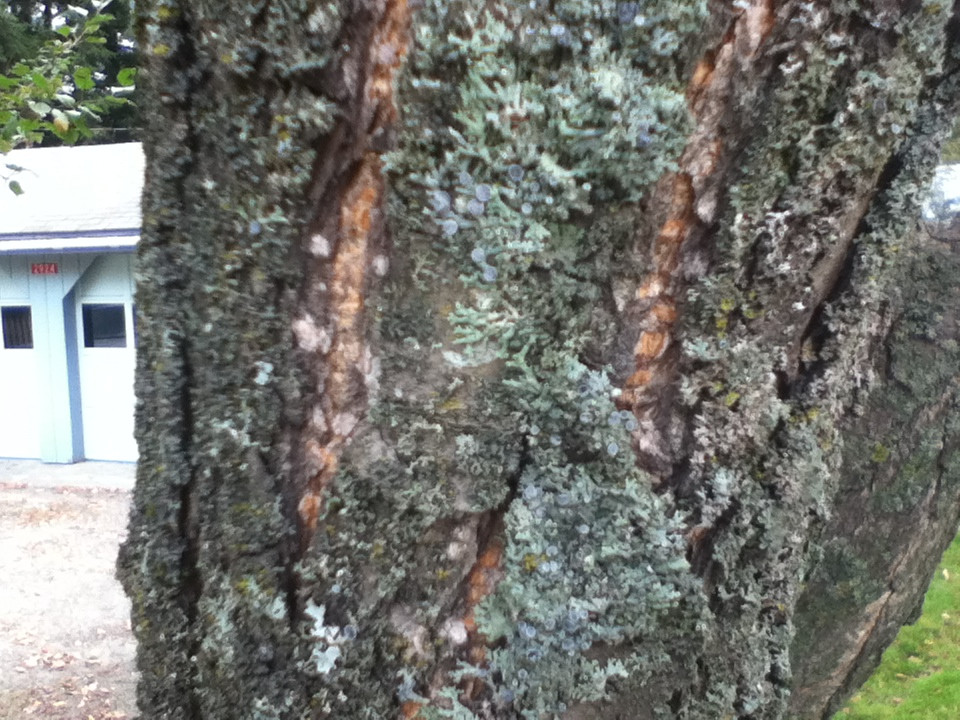 In the middle zone, there are a lot of twigs. Some of the twigs have no leaves on them (but did have leaves in previous years). Some twigs have small, dead, shriveled-up leaves. And some twigs have a few, leaves at the ends. Here's a close-up picture of some twigs from the middle zone, where you can see the typical distribution of leaves. There are also some of the dark, shriveled-up leaves in this picture. (In the full-tree picture above, the angle and background trees make it hard to tell the nature of the 'middle zone'.) 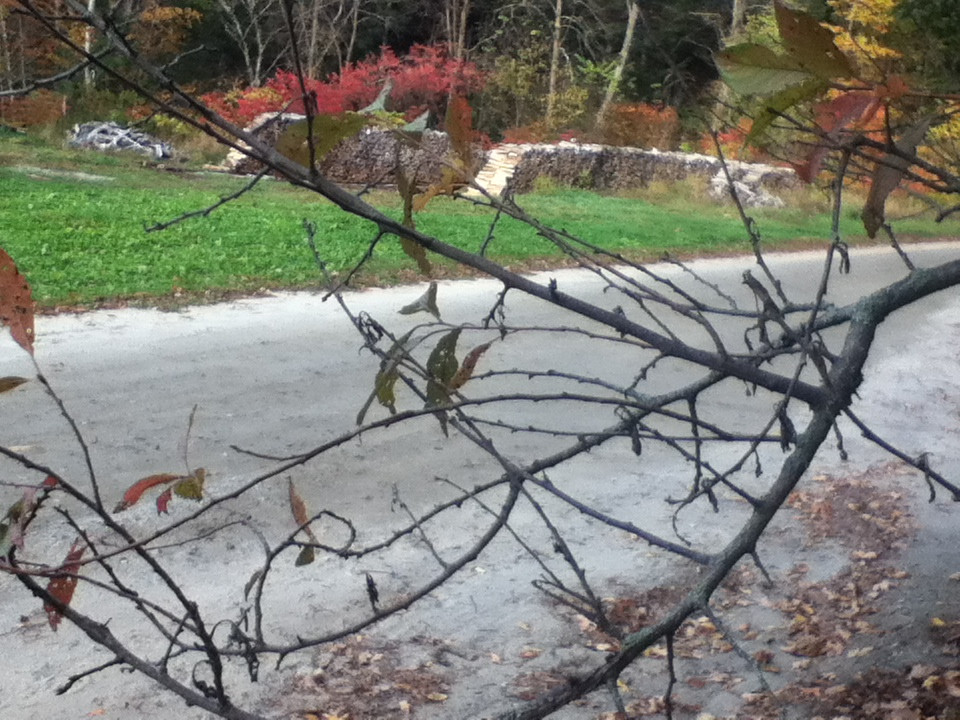 This year (and some previous years), the leaves have holes in them, like this: 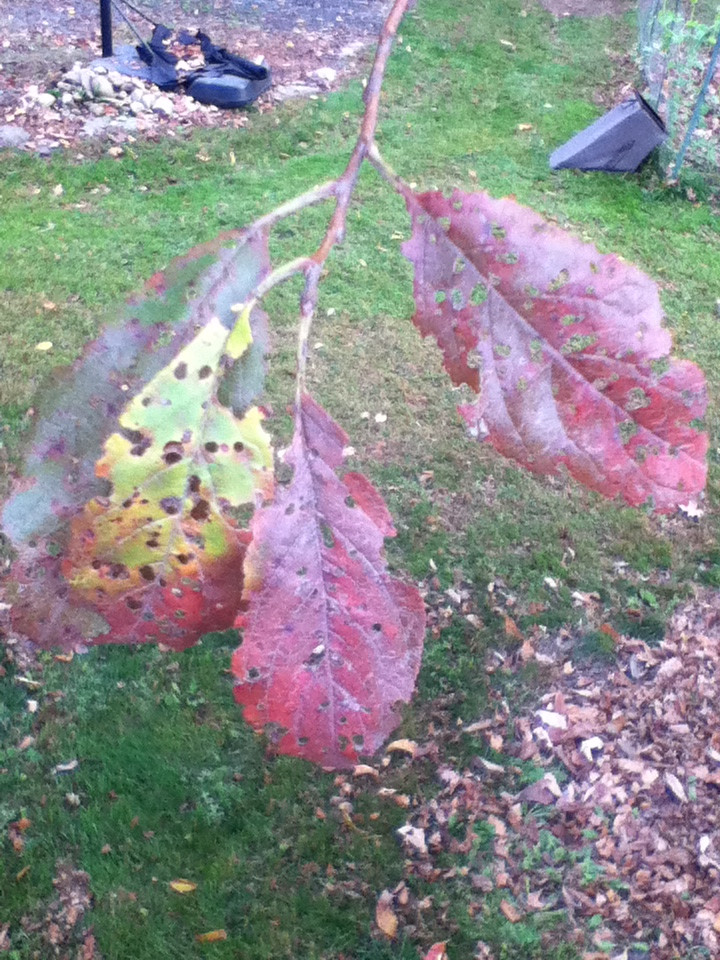 All the good twigs and leaves are at the top of the tree. They're not great, but they're good and they're the best the tree has. They are packed with flowers every year, and some years I get an occasional small fruit.

They grow tall and there's little or no lichen.

I say they're "good not great" because by this time of year, those top leaves also have lots of holes in them (see leaf close-up above) and the fruit-production is almost non-existent. (I've only got one plum tree, so maybe that's why there's almost no fruit.)

What's causing the slow die-off of this tree from the bottom up, and how do I promote healthy growth on the lower branches?

I have not taken good care of this tree. This means little to no fertilizing and pruning in the last few years. I know I need to feed and prune it, but at this point I'd like to integrate the feeding and pruning with a broader approach to solving the three-zone problem.

Thanks in advance for your ideas.

The top and outside of the leaf canopy on most trees is what gets the most sunlight, so those are the areas that normally do the best, while the lower areas slowly become "over topped" by the more vigorously growing branches in what you've labeled the "top zone." This is how most trees end up with the typical tree form of bare trunks and bare larger branches, but a wide canopy of leaves, instead of just becoming ever-denser balls of leaves all the way from the top to the ground. However, in the case of your tree it sounds like it's also not getting enough of something it needs so this is making this normal pattern seem more obvious and more intense.

First, in order to prevent more damage from insects or diseases getting into the dead areas, I would suggest pruning back all the dead branches and twigs (do it properly, don't leave stubs and don't cut into the growing "collar" area at the tree trunk juncture - see this link for how to go about it right: http://www.ces.ncsu.edu/depts/hort/consumer/factsheets/trees-new/text/pruning.html

Second, I'd suggest "opening up the crown" of the tree to let some more light into the middle. (This means thinning out some of the branches in the top zone to allow light to penetrate through the leaves into the middle zone.) This may have the result of causing new growth to form in the middle zone of the tree, making the canopy appear fuller and healthier. It will also help any fruit that forms in later years to ripen better and will reduce the chance of fungal diseases in the inner core of the tree.

Third, I'd look into whether it is possible to expose the tree to more sun. Most fruit trees in particular need full sun or pretty close to it to produce good fruit yearly. If you can move something that's shading it, or cut back larger tree branches from nearby trees to let in more light, this would likely help a fair bit. The more sun, the more energy your tree will have for making leaves and fruit.

Fourth, have someone there who is familiar with your local bugs and diseases check to make sure it isn't infested, and if it is, treat the infestation. Also, feed the tree an appropriate type of food yearly, or twice yearly, at the proper time of the year. Mulch around it to keep weeds back and also keep it from having a dry root zone.

If you do all of this, you should see a significant improvement in your tree's shape and growth in a year or two. If not, you may have an issue with the soil its planted in, and perhaps a soil test would be a good idea. Or you may have hard pan under the root ball (layer of impermeable rock) that is preventing the tree from spreading its roots out wide enough to support more growth as it gets older. Or, the tree you've chosen just isn't a good fit for your area's climate. It's hard to diagnose this sort of thing from afar, but I think this covers the basics of good fruit tree care and gives you some ideas to try to help it get past this awkward scrawny stage.

Not the answer you're looking for? Browse other questions tagged diagnosis fruit-trees plums or ask your own question.

3
Lack of Blossom and Fruit on my Plum Tree!
10
What would cause branches in the middle of a pear tree to die?
9
Does pruning a plum tree to maintain its size and shape prevent it from fruiting?
7
How to encourage new branch growth in a peach tree?
6
How should I prune my persimmon tree that has a lot of thin branches growing upward?
7
Best remedy for rot in plum tree
0
How to graft a plum tree
2
How do I prune the broken branches of my plum tree?
2
What's causing our pear tree to die off in the summer and thrive in the winter?