What is this plant that closes its leaves when you touch it?

I would like to know what the name of this plant is. I came across it on 9Gag and found it really interesting: 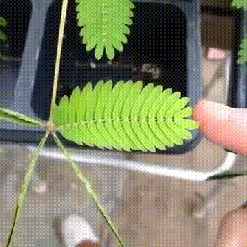 It closes all the leaves as soon as you touch it.

This plant is called the sensitive plant or Mimosa pudica. If you want a new word to use to amaze your friends the word is "thigmonasty" or touch-induced movement. From here

In the sensitive plant, the leaves respond to being touched, shaken, heated or rapidly cooled. The speed of the response depends on the magnitude of the stimulus. Hitting the leaf hard with the flick of a finger will cause the leaf to close in the blink of an eye whereas a gentle touch or modest heat source applied to leaflets at the tip of a leaf will result in a slower response and the propagation of the stimulus along the leaf can be observed.

It sounds like it might be a Mimosa, particularly Mimosa Pudica. The leaves look right, as does the leaf closing description - however the way the compound leaf comes from the stem looks a little odd - perhaps this is specific to the species, stems are overlapping, or it has lost a lot of leaves?

Mimosa is a new world plant with well over 70 species. There are at least three native species here in Texas. Some (and not all) will close their compound leaves when touched. Usually the stem holding the leaf will also appear to wilt. This appears to be a defence mechanism against being eaten.

Mimosa Pudica ( http://en.wikipedia.org/wiki/Mimosa_pudica ) is the most well known "sensitive" species and is often known as the "Sensitive Plant". Seeds are often sold for kids as a novelty flower to grow. Native to South America, it has now become an invasive plant on many tropical islands.