I live in a temperate climate zone. I have plants on a west facing balcony- they get full sun from about midday till sunset. I don't have a tap on this balcony, but have put an extender on my hose and we can bring the hose through the apartment to reach this balcony.

I have Syzygium smithii, lilly pillys native to Australia, planted in timber plantars. The planters are imitations of a half wine barrel, where the timber slats are held into place with metal strapping. They are a bit bigger than 2 foot diameter, a little less than 2 foot tall.

The soil is "light" and the water passes through it quickly.

I am having trouble keeping them watered through dry spells, winter or summer. What can I do to make the soil retain more water? 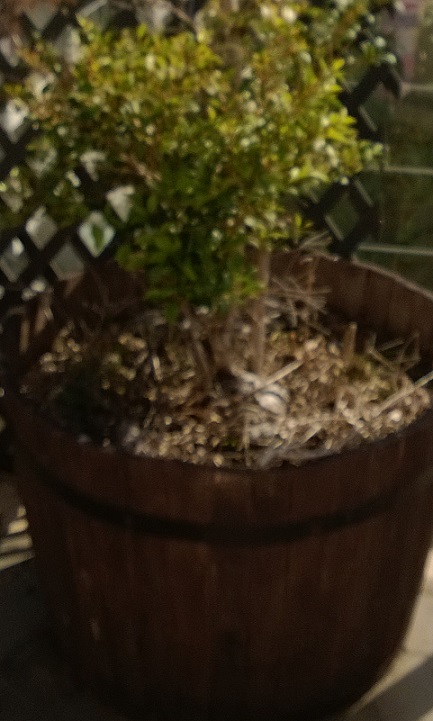 One good thing you can do is to increase organic matter. Organics, such as compost, act as sponges to absorb and hold moisture. Organics do break down over time, so you will have to monitor the level of OM in your soil and replenish as necessary.

Another thing you can do is to add clay. Clay is the very small particles in soil that is responsible for the dust you see when you drive on a gravelly road. Clay particles are so small, that the surface area of the combined amount of clay is huge. And surface area holds water.

See here for a full explanation and some charts, as well as advice on dry-gardening in general.

Soil is capable of holding on to quite a bit of water, mostly by adhesion. For example, I'm sure that at one time or another you have picked up a wet stone from a river or by the sea. A thin film of water clings to its surface. This is adhesion. The more surface area there is, the greater the amount of moisture that can be held by adhesion. If we crushed that stone into dust, we would greatly increase the amount of water that could adhere to the original material. Clay particles, it should be noted, are so small that clay's ability to hold water is not as great as its mathematically computed surface area would indicate.

This direct relationship between particle size, surface area, and water-holding capacity is so essential to understanding plant growth that the surface areas presented by various sizes of soil particles have been calculated. Soils are not composed of a single size of particle. If the mix is primarily sand, we call it a sandy soil. If the mix is primarily clay, we call it a clay soil. If the soil is a relatively equal mix of all three, containing no more than 35 percent clay, we call it a loam.

The downside of clay is it can restrict the amount of oxygen to the roots, so careful adding too much clay.

Another type of clay, apart from the dusty stuff blowing around, is vermiculite. Vermiculite will soak up water like a sponge. Here is a fairly good article on verminculite vs perlite in potting soil: http://worldseedsupply.org/blog/?p=113

Vermiculite is some pretty good stuff. It's exceeded only by humus in holding onto plant nutrients in the soil. http://en.wikipedia.org/wiki/Soil#Cation_exchange_capacity_.28CEC.29

Vermiculite also swells and shrinks as it soaks up or loses water, thereby aerating the soil.

There are a lot of different options and they all have their pros and cons. Different products will work better for different situations so look into all of them, read customer reviews and decide which ones will work best for you. Here's my thoughts on some of the ones I mentioned.

The glass watering globes are attractive but can be a pain to work with and they're glass so they can break.

I like the drip systems. The gravity fed ones are nice because you don't need a water supply or electricity but the ones with a pump give you greater control over watering times if you use a timer. You have more options as to where to put the water reservoir since it doesn't need to hang above the level of the plants. With drip systems you can also see that they're working.

They ceramic soil probes look interesting and have good reviews. They siphon water up from a reservoir so you don't have to have a big, unsightly plastic water bag or tote in a conspicuous location.

You could also get plastic pots that fit inside your timber planters and put the plants in those. Use the half barrels for show. The nursery pots that commercial nurseries sell small trees in might work. As a bonus you timer barrels will last a lot longer.

4
How to soften water to water plants?
6
Painting concrete pots to help conserve water
3
Can I use unused pine bedding as mulch in my potted outdoor plants?
2
Whats the next step to improving my schefflera?
13
Can drained water from potted plants be used again to water another house plant?
2
Do Citrus potted plants need acidic soil
2
Sprinkling plants' leaves with water
1
Soil to buy for potted plants?
4
How to maximize nutrient retention in a coir hanging basket?