What is acid soil?

Everyone talks about acid soil, but what does it mean when someone says my soil is acid? How does soil get that way? Is it a good thing? Is it a bad thing?

Randy's given a very scientific explanation of the causes and what it means, but in simple terms, it refers to soil ph, which runs on a scale from 0 - 14, the lowest number being highly acidic, and the highest alkaline, and 7 being neutral. If your soil is acidic, then certain plants will do very well in it, things like rhododendrons, pieris, blueberries, most heathers and heaths, but other plants which prefer alkaline soil will do very badly. Japanese Acer (palmatum varieties) is an interesting one - they don't like limey (alkaline) soils, but are perfectly happy in neutral or acid soil conditions. Other Acers, along with many other plants, aren't at all fussy about their ph conditions, although an extreme of 1 or 13 might cause some problems. So the only reason you might want to know your soil ph is to work out what you can grow in it well, or whether you need to make some emendment to it in order to grow a wider range of plants.

There is one plant which is a very useful guide to soil ph without doing a sample ph test - Hydrangea macrophylla hortensia varieties (those with the large, rounded, mophead flowers). Plant a pink one in alkaline soil and the flowers will come out pink - put the same plant in acid soil and the flowers will be blue. Around neutral will give flowers that are mixed between the two colours or a rather faded, unpleasant lilacy shade.

Broader causes of soil ph are the local geology, that is, what kind of bedrock or stone is under the soil, or whether the soil was originally alluvial (such as in old river courses). So, to answer your question fully, acidic soil is neither good nor bad, although you may consider it bad if you want to grow a lime loving plant in acid soil, or the other way around.

You might be interested to know that the ph scale applies to human beings as well - the body expends a lot of effort to keep the blood at 7.39 on the ph scale - illness results very quickly if that alters. Ph of the body, just like soil, changes depending what you put into it regularly, although effecting a permanent change from, say, acid to alkaline in soil is almost impossible.

Let's start with a definition of acid. An acid is any subtance which can act as a proton donor. Protons in this case are hydrogen ions (H+). 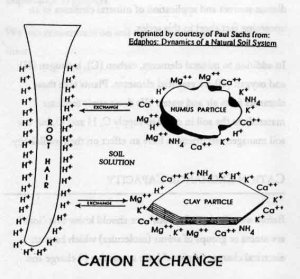 Plants take up cations, which the plant uses for nutrition, by releasing H+ ions from its roots. One H+ ion may dislodge a potassium (K+) from the clay particle, which the plant can then take up. But if the soil is so acid that the released H+ simply replaces another H+ on the clay particle, the plant can't get its nutrition. In this way you can say that acid soil is really malnourishing soil... or depleted soil. This doesn't seem like a good thing to have.

Unfortunately, it's not that simple. A slightly acidic soil can prevent potato scab as the bacteria doesn't care much for the acidity. Slight acidity can also make iron absorption easier. Soil acidity has been put forth as the reason fusarium fungus isn't found in pine forests. So, as it turns out, the most nourishing soil isn't the most nourishing soil in most cases: 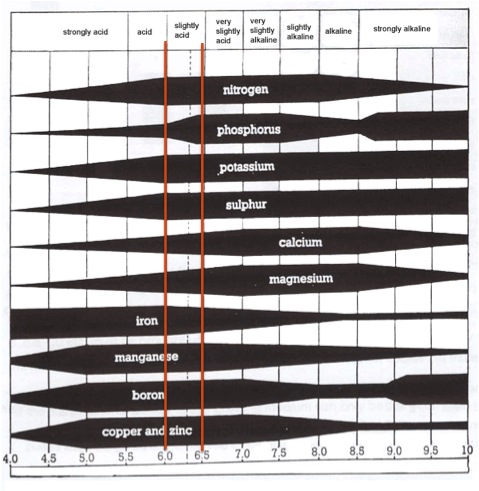 Very acidic soils, in addition to be non-nourishing, make aluminum and manganese so readily available that they become toxic to plants.

Now that we know what it means to have an acid soil, how does a soil become acidic?

The pH of rain varies, especially due to its origin. On America's East Coast, rain that is derived from the Atlantic Ocean typically has a pH of 5.0-5.6; rain that comes across the continental from the west has a pH of 3.8-4.8; and local thunderstorms can have a pH as low as 2.0. Rain becomes acidic primarily due to the presence of two strong acids, sulfuric acid (H2SO4) and nitric acid (HNO3). Sulfuric acid is derived from natural sources such as volcanoes, and wetlands (sulfate reducing bacteria); and anthropogenic sources such as the combustion of fossil fuels, and mining where H2S is present. Nitric acid is produced by natural sources such as lightning, soil bacteria, and natural fires; while also produced anthropogenically by the combustion of fossil fuels and from power plants.

Not only is rain a source of acid, but the water itself also leaches many of the cations that compete with H+ in the soil solution.

There is a hierarchy in the process of cation exchange on colloids, as they differ in the strength of adsorption by the colloid and hence their ability to replace one another. If present in equal amounts in the soil water solution: Al3+ replaces H+ replaces Ca2+ replaces Mg2+ replaces K+ same as NH4+ replaces Na+

We see that Al+++ and H+ replace everything else on the soil particle, which leaves all the nutrients free to be carried away by the rain water. The result is a soil high in H+ concentration and low in nutrients (Al+++ is not a nutrient, but a toxin that becomes more available to plants in more acidic soils).

The amount of rainfall is the main way soils become acidic.

In high rainfall areas, soils tend to acidity as the basic cations are forced off the soil colloids by the mass action of hydrogen ions from the rain as those attach to the colloids. High rainfall rates can then wash the nutrients out, leaving the soil sterile. Once the colloids are saturated with H+, the addition of any more hydrogen ions or aluminum hydroxyl cations drives the pH even lower (more acidic) as the soil has been left with no buffering capacity. In areas of extreme rainfall and high temperatures, the clay and humus may be washed out, further reducing the buffering capacity of the soil.

If you see anything I can add or change, please leave a comment and I'll edit to include. I put this here as a service to the community so that we all have a clear understanding of what acid soil means and a reference for when explanation is necessary.

In overly (perhaps) simplified terms every growing media will have a pH (soil, vermiculite, peat whatever your growing media is). This pH can either be acidic ( below 7 pH) or base (above 7 ph) or roughly neutral (right around 7).

pH has a ton to do with what nutrients in your soil / growing media are available to be used by your plants. You can have extremely rich and fertile soil with a very acidic ( say below a pH of 6 or lower) and have the plants showing signs of nutrient deficiency because the nutrients will be “tied up” in the soil due to the overly acidic pH.

It would behoove you to learn what your plants thrive on best in terms of pH and amend your soil accordingly if needed, after testing. Or just plant it and keep an eye but having a way to test pH on hand would probably be wise.

pH is weird and kind of complicated but once you have an understanding of what it is, what your local soil is prone to (if that is a factor for you), and how to test and amend soil if need you will be A-ok. For me in Ohio in most cases planting outdoors I have 0 issues with pH unless I’m planting something that has peculiar requirements like blueberries or hydrangea.

Not the answer you're looking for? Browse other questions tagged plant-health soil-amendment or ask your own question.

16
Can I grow a fruit bearing pistachio tree?
13
Why is it bad to mix layers of soil if you do it once at the start?
17
Does a pine needle mulch make your soil acidic?
17
Why it is bad to add sand to soil?
6
Why remove dead leaves from plants?
3
Egg shells and peanut casings in pot soil
4
How to amend clay soil to propagate trees for bare root distribution?
1
What is the difference between replacing soil and amending soil?
3
How to make well-drained sandy soil from potting mix?