What is the best way to sow grass seed in high rainfall areas?

I have tried sowing onto loose soil and covering with grass clippings, but the rain floats the seed and the clippings into piles and the pounding action of the water buries the seed in the mud.

I have tried spreading compost then sowing seed onto that, then covering with grass clippings, but the result is the same.

Some have suggested I try straw, since the straw is physically large enough to resist the water. I hate to use straw because it would take so long to decay and the grass I am planting is very small compared to the straw. I wouldn't think the grass could grow very well from under the straw.

Some have suggest grow mats, but this is costly and the mats take a long time to decay as well. Further, if animals claw at the mats, it could uproot an entire section of grass.

Some have suggested the mulch made from recycled newspaper, which once saturated, doesn't float.

Some have suggested sand. The sand doesn't float and doesn't provide much resistance to seedlings trying to grow through it. Sand is also very cheap.

It is impossible to time the weather so that I can get a guaranteed 2 weeks without rain. It takes 7 days for the seed to germinate and another week for the grass to grow big enough to resist severe thunderstorms. We don't get light showers. If it rains, it is always a heavy downpour of 3+ inches.

So, the question is: What is the best method to sow grass seed in this environment?

You're answering every question except the one I'm asking

Because everything you've said and the pictures you've posted lead me to believe that the problem you're having is not because of high rainfall in your area.

Your big issue is establishing grass in that section around your house. You've managed to get the grass seed to establish in other areas of your lawn, that receive the same amount of rain, even though you planted a grass seed that does not typically do well in your climate and you planted it at the peak of summer which is the worst time to plant a cool season lawn.

The issue you're having is clearly something localized to the area you're having problems with. People manage to grow grass successfully in areas with as much rain as you get. It's not like Georgia is devoid of lawns and you're the first one to ever try and plant grass seed nor the first one to try and plant KBG. I get a similar amount of rain and people in my area don't have problems getting grass seed to grow.

The house has been here since 1941 with no gutters. I added gutters after I saw that grass wouldn't grow with the flow from the roof.

This explains a lot! All the problems you ascribe to heavy rain fall... leaching of nitrogen, calcium and other nutrients, compaction, etc.... multiply them many times over. That's what's happening around the perimeter of your home.

If it rained 1" you'd have close to 625 gallons of water falling on your roof. That water sheets off your roof and lets assume sprays over a 1' wide path along the perimeter of your home (assume it's equal to make the math easier, some parts may get more or less depending on your roof design.) 625 gallons divided by the 140 sq ft perimeter means you have about 4.5 gallons of water per square foot hitting the soil around your house with every inch of rain.

In the open areas of your yard the soil will only get about 0.625 gallons of water per inch of rain. The area around your home is getting about 7 times that and it's not simply little droplets it's pouring on it. The force of the water likely severely compacted your clay soil around your house.

Without knowing the design of your roof and how far the water was actually coming down from the roof the numbers aren't accurate and I don't mean them to be anything other than an example to illustrate that without gutters the soil around your home received considerably more rain per square foot than other areas of your lawn.

It is clear from the photos that the soil around your house is very poorly draining resulting in a lot of standing water when it rains. You need to address those drainage issues. Not only to get grass to grow but because it's a nuisance and potentially damaging to the house structure to have that much water pooling there.

Even if someone were to answer your question regarding keeping the seed in place during heavy downpours when the area gets flooded, the issues with the poor drainage would lead to other problems once your lawn was established. You need to deal with the drainage and soil issues if you want to have healthy lawn growing in those areas. Even if you were to put sod down the excessive water and poor draining soil would eventually damage it.

In addition to dealing with the drainage issues I would recommend sending a sample of soil from that area to your local extension office for analysis because there are probably significant deficiencies in the soil due to how much water it received compared to other parts of your yard.

This is the only answer I can come up with (other than to plant swamp grass) as far as why you're grass isn't growing in that area based on the information you provided. Other issues such as too much sun and heat (plus what's reflected from the white siding). It's interesting that the pictures you took show that there is no grass in the areas of your houses shadow. That could be a factor but poor drainage is a big problem.

You don't seem to be happy with it so maybe someone else will come along and provide a different answer.

It appears the best solution may be this: http://www.profileevs.com/products/rolled-erosion-control/temporary-erosion-control-blankets-ecb/futerra-f4-netless

Futerra® F4 Netless® employs a lightweight, yet lofty matrix that provides high levels of slope protection and rapid vegetative establishment. It is particularly well-suited for fine turf and environmentally sensitive areas. All weeds and pathogens are removed from its recycled wood fibers during a patented Thermally Refined® process. It also comes without nets or threads that could otherwise entangle animals or maintenance equipment. It is yet another Earth-Friendly Solution for Sustainable Results™—the product of Green Design Engineering™.

It is well-suited for fine-bladed grass and won't uproot a whole mat of grass if an animal claws at it.

Here are some pics taken from this forum thread: http://aroundtheyard.com/renovations/fall-2011-renovation-t4029-60.html 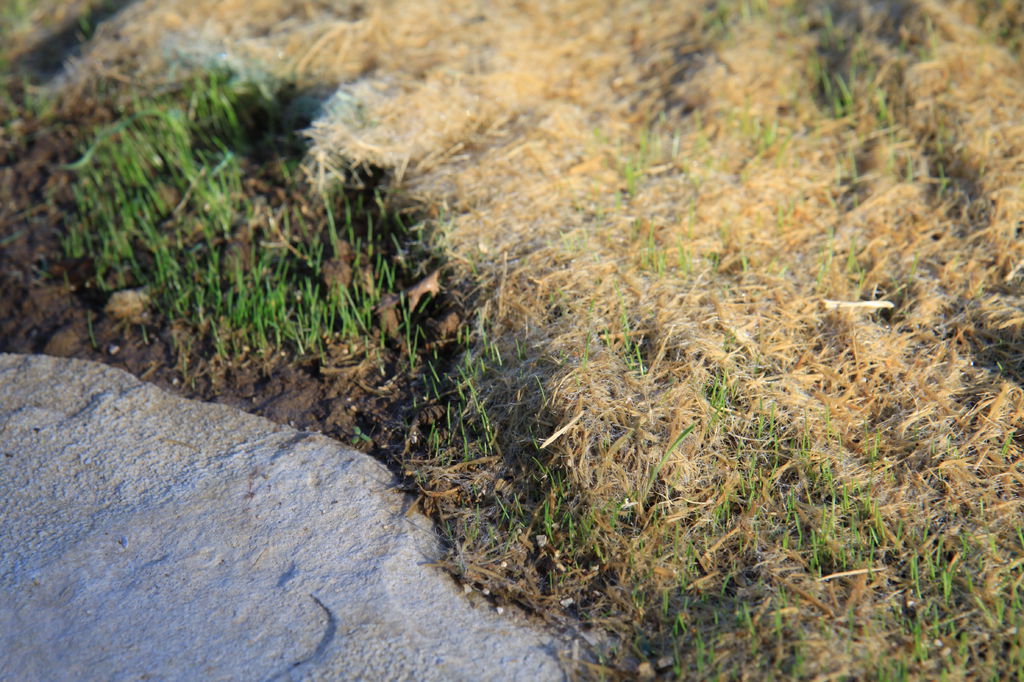 The material is the same size as a KBG sprout, so it is unlikely to hinder growth from under the material. This is in contrast to straw, which is several times larger in diameter than a grass sprout. The material is also fluffy and resists matting that could hinder grass growing from under it. 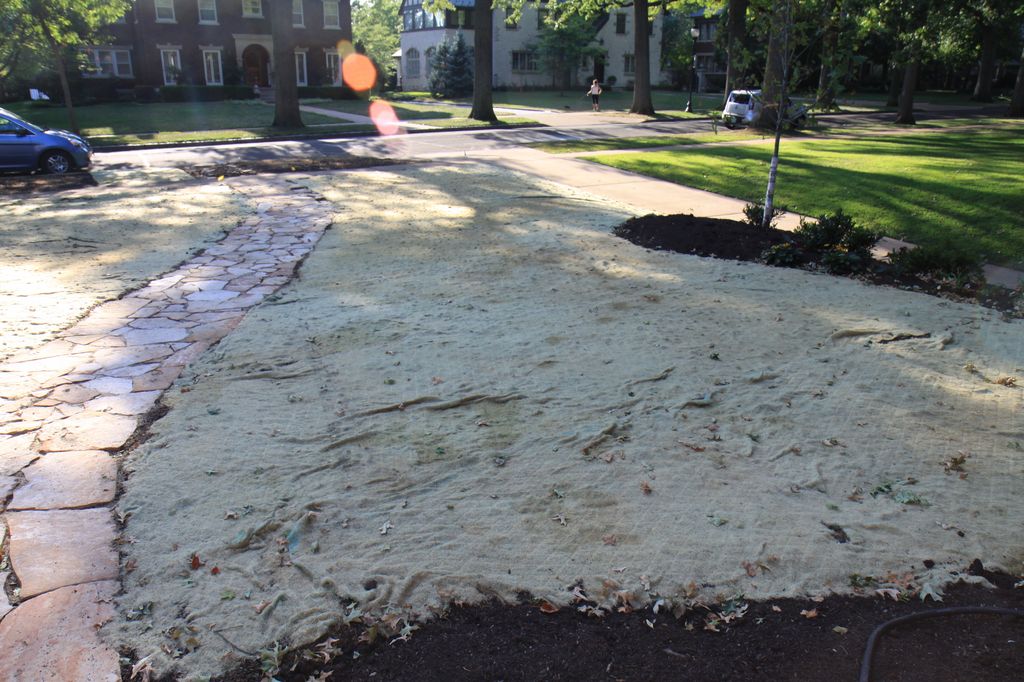 The material is intertwined enough to hold together, but not so much that an animal could remove a large sheet of it. 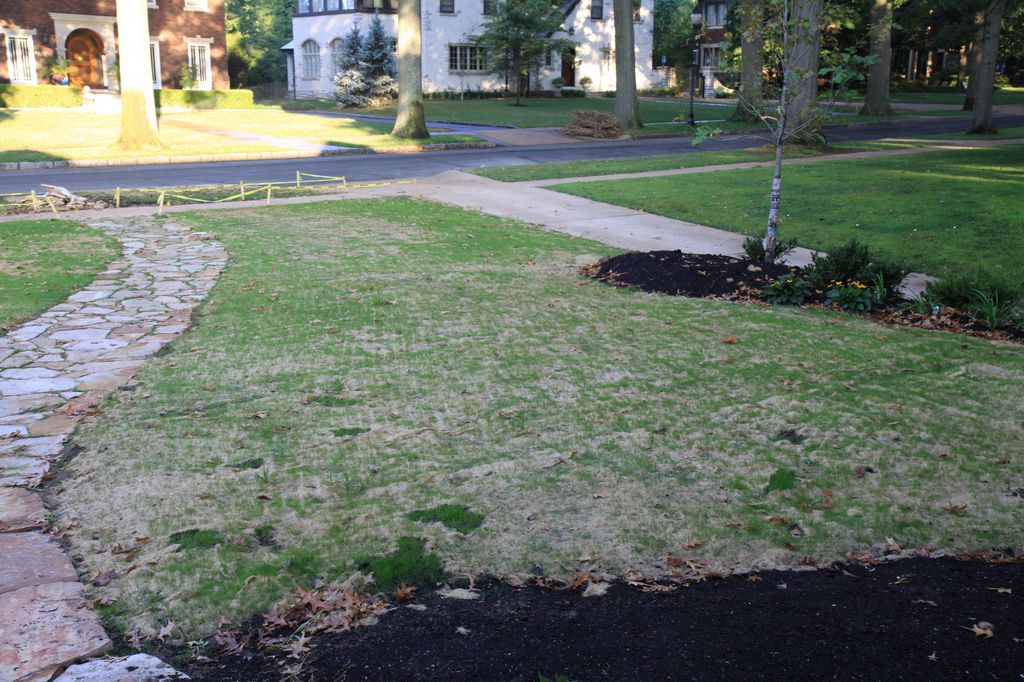 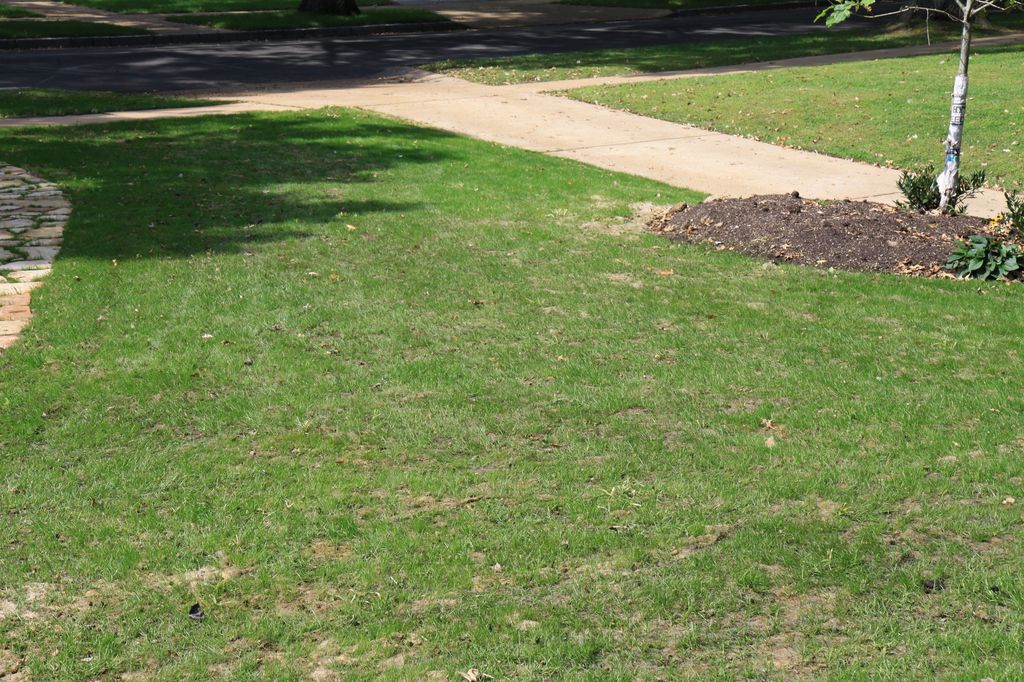 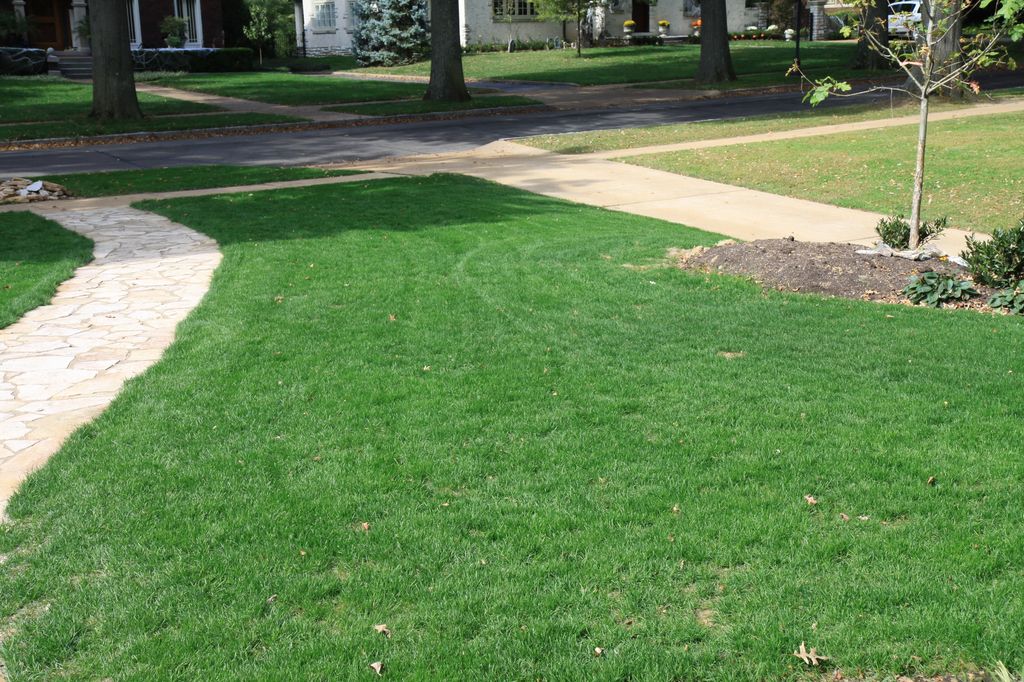 What I also like about this material is that it's made of wood, which is high in lignin, which is the precursor of humus.

Humus is the penultimate state of decomposition of organic matter; while it may linger for a thousand years, on the larger scale of the age of the other soil components, it is temporary. It is composed of the very stable lignins (30%) and complex sugars (polyuronides, 30%), proteins (30%), waxes, and fats.

Lignin is a complex chemical compound most commonly derived from wood ... from the Latin word lignum, meaning wood.

I cannot think of a better method of sowing grass seed in a high rainfall area.

Not the answer you're looking for? Browse other questions tagged lawn grass or ask your own question.