How can I determine when to pick a spiny cucumber, without touching it?

We have a friend who occasionally brings us vegetable plants, as she has her own garden/farm thing where she cultivates plants to sell to restaurants. This time around, she brought us some tiny red and yellow tomatoes as well as some cucumbers. The tomatoes were easy to work with, the cucumbers less so. We're currently at the point where we're trying to figure out when it's time to pick them. Unlike store-bought plants we've dealt with in the past, our friend did not leave us any seed cards or other kind of information that could help us.

The problem is that they're particularly prickly. The largest one, on the left, is probably ready by size alone. The picture on the right is one of several smaller ones. You can probably see a fair amount of spines, mostly near the bottom, but the entire fruits are positively covered in shiny barbs. It's not limited to the fruits themselves, though. The stalks and the leaves of the plant are also covered in coarse hairs that can even puncture our gardening gloves. If there was such thing as a cactus cucumber these may very well be it, haha, but I've actually heard of spiny cucumbers for a long time. Mom says these are worse than dealing with rosebushes.

A quick search online has shown up mostly ways of checking if a cucumber is ready to pick is by the firmness of grasp. This is decidedly not an option as I enjoy my hands being relatively smooth and hole-free, and thicker gloves mean I won't even be able to feel the fruit. Resources I've found on dealing with spiny cucumbers all seem to be about how to cook and peel them, not how to harvest them off the plant in the first place. So I ask, how might I ascertain that a cucumber is ready if it is too spiny to feel? With touch out of the question (lest there's a means to touch them without needle death), what means can we use to check on them and decide to snip them off the plant for eventual cookery? 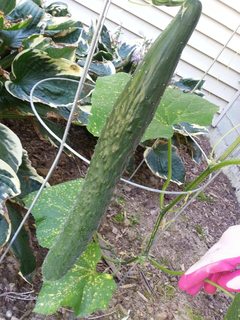 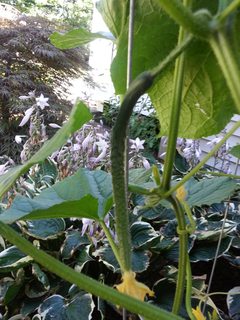 A couple of things to look for other than the feel (they should be firm if you can find a spot to squeeze them where they aren't too prickly). Some amount of spines are normal on all cucumbers, but this one looks especially spiny.

Overall a combination of these three methods (squeeze, if you can find a good spot, the color, and the length) should give you a good idea of when to pick it. But I think if you can't manage to squeeze it relying on color and size should be a pretty good indicator.

20
Do peppers change color when left on the plant?

24
How does one determine when to pick corn?
7
How much of a kale plant must be left when harvesting outer leaves?
9
How do you tell when pumpkins are ready to harvest?
7
How do you collect and keep cucumber seeds for planting the next year?
7
How can I revitalize cucumber plants after spraying them for mildew?
5
How do I know when to harvest my artichokes?
2
What can I do to help root-bound cucumber plants?
2
Is this how cucumber seedlings react to cold?