How to grow plants from the aster/daisy/sunflower family? (by example of Launaea Arborescens)

I brought a piece of an Launaea Arborescens (see also my other question) with me from Gran Canaria. The plant is part of the Asteraceae/Compositae family, according to Wikipedia "commonly referred to as the aster, daisy, or sunflower family".

Before transportation, I kept the piece for some days in earth with only little water, trying to replicate the rather dry soil in which these plants prosper. When I carefully packaged the piece, I realized that no roots whatsoever had been developed.

Is it somehow possible to grow the plant from that piece? Should I better get another piece? Or - more broadly - what is a good method of growing plants from the aster/daisy/sunflower family, taking some piece of a plant?

Unfortunately, today, someone accidentally put the piece in garbage. When I recovered it, it was covered with some milky grease, possibly yogurt, which I removed with water. I hope this didn't damage the plant. The picture was made after the accident.

Update: I now cut the piece just below the lowest node and put that in water, according to an article on bush daisies, which are of the same family.

Update 2: After some weeks, the piece had cached fungus, and I threw it into garbage. 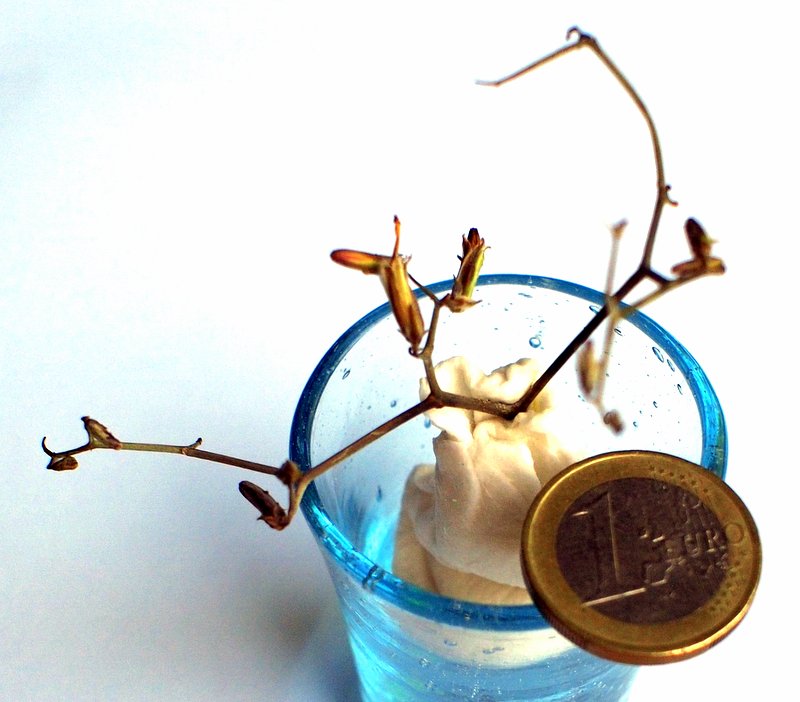 I collected seeds from Launaea arborescens when I was on Fuerteventura 2 years ago. I sowed 20 seeds in a transparent plastic container. In the cover plate I drilled some holes for ventilation. 50% of the seeds germinated. The plants grew quickly, but surprisingly, they looked like Hawkbit rather than Launaea arborescens. When I separated the plants after 3 weeks I was stunned that some of the plants died within 2 hours outside a closed (high humidity) atmosphere. 4 plants survived and were distributed to different places. In the glasshouse one died due to temperatures >40°C. Another died in the glasshouse due to dryness. My daughter and I have shared the last 2 plants. We are living 50 km away from each other. In summer our plants are outside and are regularly watered. In winter they are in the living rooms at the window. Still the plants do not look like the plants on Fuerteventura. Both have thin lignified stems and many leaves. Now, in year 2 they are building thin hexagonal stems. Simultaneously, several branches dried out and died.

I was overjoyed when this strange plant suddenly started to bloom. I counted more than 30 flowers over the summer. 5 of them were fertilized so that I could collect some new seeds. My daughter's plant had about 20 flowers.

For the new plants I am planning a high tech small scale glasshouse with ventilation, temperature control and UV-light.

There are one or two golden rules if you want to try to strike a cutting from a plant - the first is, choose a piece without any flowers, preferably between 6-10 inches in length, usually a side shoot. The second is, you must keep the cutting from drying out, so if it cannot be immediately dealt with, then it should be kept in a sealed plastic bag to prevent it drying out. However, the chances of even a sealed plastic bag retaining enough life for several hours or days is low.

I have so far been unable to find any information on taking cuttings from this particular plant - seed is available, and that might be your best option if you want to grow it.

UPDATE: Having checked, where I thought seed was available, it isn't - it's actually listed on their Wanted list. As its more or less continuously flowering, this plant, next time you're there, try to find a ripe seed pod or two. I can't tell from the picture whether that's a shrivelled flower in the centre towards the top, or whether its a seedcase that has split open, but it's certainly worth pulling apart the dead flowers to see if there's any seed anywhere.

14
How can I grow a pineapple plant from a store-bought pineapple?
8
How do I increase the chance of growing a garlic plant from a clove?
8
How do you grow a Lotus flower from seed?
11
How can I grow edible plants for a reptile in the reptile's tank?
6
Can I place plants in the ground in the original pots they came from the nursery in?
3
How far should I place garden plants from concrete and fences?
5
How fast do banana plants grow?
4
Will Burdock grow from the root?
3
What is the best way to grow lowbush blueberries from seed?
1
How long does it take to grow Tagasaste (Tree Lucerne) from seed?