Are these weeds or plants?

Recently some plants have grown in one of my plant pots. I didn't remove them because they looked nice, but I don't know if they are weeds or plants.

Please help me identify them. 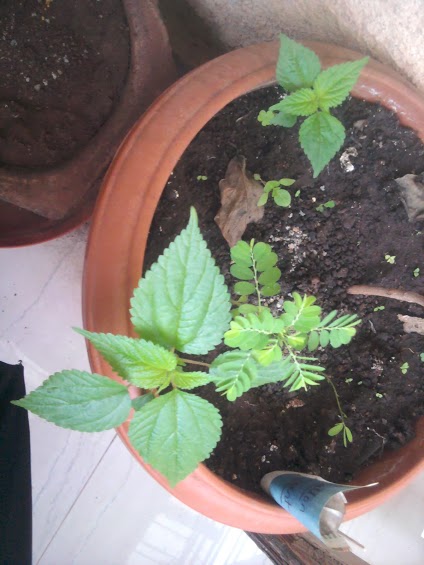 The large-leaved plant is clearweed (Pilea pumila), and the smaller-leaved one is a spurge (I presume spotted spurge, Euphorbia maculata). Neither really is a * terrible * weed, but they aren't particularly ornamental, either. [clearweed, btw, while related to nettles, isn't edible]

Both, of course. Weeds are plants. They just happen to be plants you don't want where they are. :)

In my yard, which is more meadow-like, I don't discourage the growth of dandelions and clover. Our honeybees love them. So I don't view them as weeds. In the eyes of many folks, though, those would be considered weeds and people spend lots of time and money and chemicals to combat them.

I'm no weed expert but here are my thoughts based on the picture I see. I suspect someone might be able to confirm my thoughts or provide another answer.

The small multi-leafed one in the middle of the picture looks like spurge to me. It's a weed that spreads slowly. I think it looks kinda nice but it is a weed. When I find it in my strawberries, I pull it out. See my update below

I believe the other larger leafed one is a nettle. It's a weed too. There are some uses for nettles, for sure, but for most folks nettle is just a weed and gets pulled out.

The smaller one might be something like Phyllanthus tenellus, which is in the Euphorbiaceae family. Looking at the weeds of India, this is one that looks similar.

It might also be a Senna based on it's leaf shape.

I'd be inclined to think it is one of these two rather than a spurge as I earlier thought.

The one in the center looks like a vetch. I think itsmatt may be right that the other is a nettle. Does it have little hairs all over the leaves and stem? If so, be careful touching it without gloves! Nettle won't make a very good container plant, I'm afraid, but you might consider cooking it up if you determine that is what you have. It is very nutritious, and to my mind, tastier than spinach when it is cooked. Stir frying it or blanching it for a few minutes is enough to remove the sting.

I'm more interested in the one described variously as nettle or Pilea, the larger leaved two that are the same - looks remarkably like Honesty (Lunaria annua) to me, but can only really be that if you had some previously, or someone nearby did. And the 'vetch' or 'spurge' could equally be a burgeoning Indigofera...