How to safely distribute closely growing chili pepper seedlings around a bigger pot?

I have a pot of very closely growing chili pepper seedlings and I'd like to distribute them around a bigger pot, but I don't think their roots will allow easy separation. Is there some way I could separate them from each other without sacrificing too many seedlings, like maybe watering the soil down, planting them one by one and covering roots with wet soil?

I hope this picture can help understand how close the seedlings are: 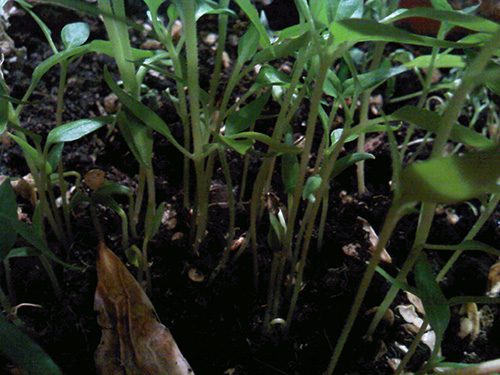 transplanting thinning
Share
Improve this question
edited May 22 '13 at 3:37

Separating young seedlings can be tricky because their roots tend to be quite tender and easily damaged. Often the prescription for seedlings is that you"thin" them out - either pulling or (more often and less likely to disturb the roots of the ones you wish to keep) snipping them off with scissors. Sounds terrible - thinning goes against the idea in our heads that we're trying to grow things - but it is necessary to give them space or you'll have a very unproductive mess on your hands. Likely the plants will do very poorly.

That said, you may be able to carefully separate them if the soil is a bit moist and you are gentle with them. In all likelihood you'll lose some in the process but maybe not all. The sooner the better once you've got seedlings somewhat established because at some point the roots will be intertwined and then you'll have a very hard time separating them.

You might be able to carefully dig down a bit and get a shallow piece out that has several of them and separate them out a little at a time. Worse thing that happens is that they all die, but that's probably not going to happen.

Again, in all likelihood some of those seedlings are going to die in the process and so, personally, I'd probably just look at what's there, pick the strongest of the seedlings, thin the others with scissors (just cutting those off at soil-level) and then carefully dig out the ones I'm keeping and transplant them.

Not the answer you're looking for? Browse other questions tagged transplanting thinning or ask your own question.

5
Should I transfer a growing potted blueberry bush to a bigger pot, or into the ground?
7
How can I save spinach seedlings I planted in a pot with mint?
5
Can I transplant young Rose of Sharon plants in July in Zone 6a?
12
Why shouldn't I water a Blue Spruce tree during and after transplanting it?
7
Multiple Cast Iron Plant rhizomes (Aspidistra Elatior) in same pot?
2
Storing bare root trees short term before planting in permanent location?
5
How to prune chili plants to help recover from transplant shock
1
Should I separate the cilantro plant stalks? I bought a plant from walmart
2
Are mature store-bought veggie plants like these intended to stay in their pots?
1
Herbs - Help with transplantation of dill seedling to slightly bigger pot