Relocating an apple tree - when should this be done?

A long time ago (about ten years), I put some apple seeds in the ground, and now I have an apple tree. The only problem is that it is too close to the neighbour's house, and might do some damage to it with its roots. Moreover, it is too close to a pear tree. Here's a picture of how close the tree stands to the house. 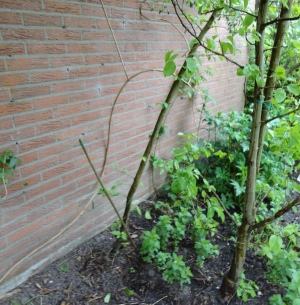 On the left you see the apple tree, and on the right the pear tree. Now I wish to move this tree, relocate it to the other side of the garden, where it has more room, can get more light, and not be such a problem to the neighbour's house and the pear tree. The problem is that I have no idea when I should do this. Right now, the tree is blossoming. 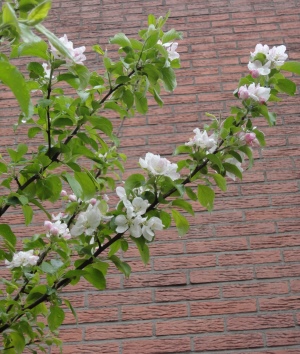 What season should I wait for to relocate it? When would a few broken roots (as it is impossible to dig all of them out) do the least damage to the tree? And how should I do this? How much of the roots should I try to get out, and should I take some dirt from the old spot with it? Are there any problems that could arise?

Sure, there's the chance it won't make it but it probably will. And a chance you'll damage the pear tree too in the process but you probably won't.

Ideally, I would move it early in the year before the spring growth when things are dormant. I've successfully moved trees and bushes other times of year - I moved two crape myrtles last weekend and it was 70deg F outside - but doing it early in the year causes the least disturbance to the tree.

I would take a sharp spade and get a few feet of root if you can. Make sure you give it ample space in the new hole that you dig and put some decent compost in there. I wouldn't add any fertilizer though.

It'll need water (since you're severing several roots) so don't be stingy with the water that first year after you move it. You don't need to drown the tree of course but keep it watered. It will have lost quite a bit of root in the move so it'll need some attention.

Expect that you will cut into the pear tree's roots a bit too. They spread out some distance and as close as they are, I expect they might be mixed in together a bit.

Trees are pretty resilient though and if you baby it a bit when you move it, you'll likely have not issues.

Fall, shortly after the leaves have dropped, is the best time of year to move trees - they then have the entire winter to rebuild roots WITHOUT needing to supply leaves with water from the roots (that are inevitably damaged in transplanting.)

Not the answer you're looking for? Browse other questions tagged fruit-trees tree-care transplanting apples root-pruning or ask your own question.