Is it OK to grow plants in clear (transparent) pots?

I was using old clear (transparent) plastic meat packaging to grow plants in. Is that a good idea? Are there any side effects of roots possibly being exposed to the sun? 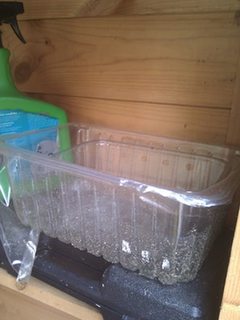 Roots exposed to the sun might think they have reached the surface and start to put shoots out.

Those particular containers don't look very strong - don't underestimate the weight of wet soil. Ideally you should have some more rigid that does not collapse under the soil's weight or when you move them.

Do these containers have holes in them? Holes in the bottom are required for drainage, but holes in the side could wet (and degrade) black paper/card as recommend by @shanna.

Plastic pots can be okay, but you need something stronger and opaque. All plastic pots will eventually degrade with the UV from the sun. Perhaps not a significant problem at high latitudes, but here in Texas, they definitely have a limited life (as does plastic garden furniture!) and some are better than others.

@gunbuster mentions plasticizers. I suspect in this application they are less of a problem than in food containers, but this is another good argument for containers that are sold as plant containers.

Plastic is not a good medium. It traps heat, melts in high temperatures and contains plasticizers (especially in soft plastic like yours) which may dissolve into the soil.

In addition, your container is too shallow for most plants. It can only be used as container for plant germination.

If you're stuck for containers and this is your only option (or you want to be environmentally friendly and re-use those pesky non-recyclable food trays), you could glue something like black paper or cardboard to the outside to keep the light from getting through.

What do you mean when you say that you are using clear plastic containers to grow plants?

I suspect all of the above would be fine, although the indoor plants may have problem with not enough soil depending upon the plant. Similarly, there may be some seedlings which need deeper soil level than that.

The other replies are all applicable, but I can think of situations where it would not be a problem, and there are probably others. What is your goal, and what are the specifics?

Another major problem is algae. As algae needs light and moisture, the bottom part of the pot is the perfect place to grow.and once grown algae can destroy the root system ,And even if there is a little bit of algae the plant wont survive.

Clear pots can be great for plants, especially transplants. Plants vary a lot, but in general, the roots reach the edge of a clear container, feel the sun, and stop growing. This prevents them from getting root bound. Once transplanted into the ground the root start growing with a minimum of transplant shock. Broccoli is an example of a traditionally transplanted crop that can really root bind and benefits from clear containers. Better yet is soil blocks...no pot. Blocks work great for large operations. Gardeners may find clear cups more convenient and economical.

I have been using plastic shoe boxes with transparent fitted covers or with plastic wrap covers, plus salad green boxes and other such transparent boxes for 5 years now with:

Another thing to consider with transparent boxes is the tendency of algae, including some species that you might really not want, and also cyano-bacteria to grow in such boxes if the bases are exposed to light. Therefore, consider shielding the bases in many situations with aluminum foil wrapped up to the soil or planting medium line. If sunlight is to shine on the box during warm weather, avoid dark foils and avoid black paper, unless your objective is to cook the plants.

I acknowledge that there are some plant genera and species that would not do so well with too much light getting into the pot sides...so shield those roots from light with something that reflects light, unless you have a particular reason to need to warm up the roots. There are plenty of plants that like that, too, but don't let them reach cooking temperatures, which can be as low as 65 degrees for some species that I've grown or well over 100 degrees F for others. Get to know your plant's requirements, first. Some will want lids on the boxes and some won't.

Another point well made in response to the original question was that one can often use recycled containers. I have found reasons to use 1/2 gallon plastic milk boxes on their sides, plastic clam shell produce boxes, both those with ventilation slots and those without same, plastic meat boxes that have fitted transparent lids and black bottoms, etc. I have used cupcake boxes, both new and recycled, plastic cake boxes, etc. I only buy the new ones for use as very large community pots or very large germination flats.

Not the answer you're looking for? Browse other questions tagged containers or ask your own question.

14
Can I use a clear glass as a container for houseplants?
2
Plastic glasses as containers for seedlings - yes or no?

10
Do homemade paper pots for seedlings really work well?
14
Can I use a clear glass as a container for houseplants?
9
What sort of pots are used in the pot-in-pot method?
9
Do young plants prefer their pots be rotated?
6
Plants not growing well in containers despite taking all the measures that I could read about
0
Raised beds vs containers in greenhouse?
2
Grow tomatoes outdoors inside a transparent plastic box
1
Appropriate planter size for tomato plants