How can I rejuvenate a privet and hawthorn hedge?

I have a mixed hedge which is about 6 feet high. I think it is privet and hawthorn.

Currently, it is very top heavy in terms of the growth, and it has a lot of bare stems lower down. Please see the photographs. 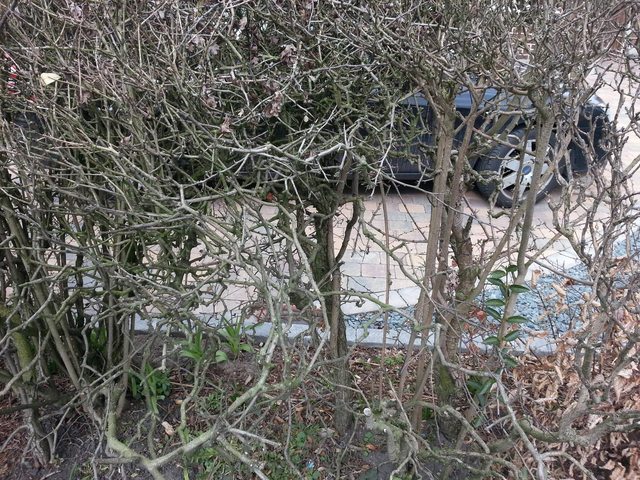 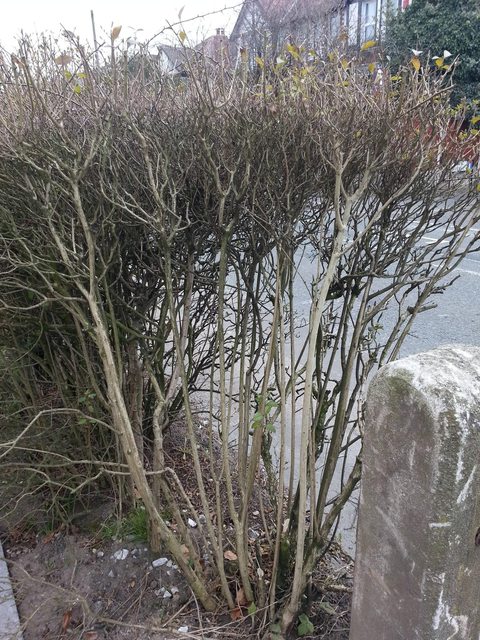 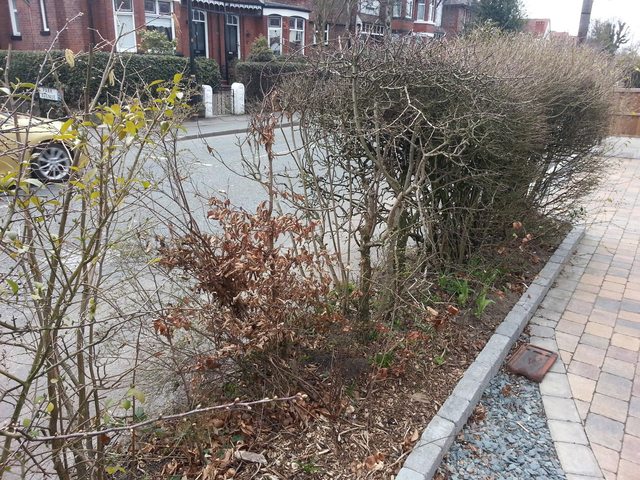 I want to try and get the hedge to be bushy all the way down to ground level.

I've read about pruning back hard, which I take means to basically chop the whole thing down to within 12" of the floor.

I've got no gardening experience, so I'm nervous at taking such a drastic step.

Yes, in my opinion it's pretty easy. But it will take some years for a good final result.

1) Renews the earth around, remove the stones, remove the weeds, remove the old land (up to find out a little roots, as you can). Add at least 20 cm of compost mixed with manure aged, all along the fence.

2) Clean the plants, remove all dead branches to the root, sawing as down as you can. Remove diseased branches, with moss or fungi, to the root. Begin to prune (but do not delay, since the season is already advanced): Cuts the older and thicker branches, sawing at the base, close to the ground. Cut the branches less old to about 30 cm from the ground.

3) Remove the diseased or weak plants and replace them with healthy plants. Prune the new plants to the same height as the other. After this intervention, the hedge will practically bare, but, with little patience, it continuously develops new shoots, which must be pruned frequently to get the desired shape. In the following years the hedge will be back thick and invigorated.

4) Pruning in the second growing season. The branches of the hedge are sheared again and, if necessary, slightly shortened, gradually, beginning to give the desired shape to the hedge. As a general rule, it is assumed that a hedge well pruned is 10-20 cm narrower at the top than at the base of the plant. A hedge that at a height of 1.5 m has a width of 50 cm, will have a base of about 70 cm. If in the second growing season, the hedge has not yet reached the desired height, you will not need you will not need to prune the top. Of course, the sides will be cut at least twice between May and August.

6) Only after the third or fourth year gradually bring the fence height and shape you want, potandola in June and August.

7) Only after the third or fourth year gradually bring the fence height and shape you want, the pruning in June and August. The hedge, when it has reached the desired height, it must be sheared. Shorten both the upper and the lateral twice during the growing season.

8) The best time to perform what said above is in late autumn or early spring.

9) How to treat hedges. During the spring you add into the space among the plants enough compost, whether or not mixed with manure or a chemical fertilizer. In September-October can also be used manure decomposed, that, in the following spring, is slightly worked into the soil.

10) The disadvantage of a "natural fence" is the fact that subtracts nutrients and moisture to the soil. For example, if the hedge is bordering a flower bed or lawn, you can see from their appearance that they are significantly depleted. It is therefore advisable to cut the roots of the hedge (particularly those of privet), so that the same hedge grows less quickly. you can proceed as follows: at a distance of 30-40 cm from the hedge spade a ditch, so that the roots can be cut to a depth of about 40 cm.

Since your fence is surrounded from stones and asphalt, your problem is just to limit the grow and let space for soil and compost.

Given the three to four years to rejuvenate and the effort involved you could do less work and have a nicer look faster by ripping out the old shrubs, adding new organic matter and planting new.

With the asphalt and interlock so close by this would be the time to install some kind of watering system as lack of water is likely to be the limiting factor to growth in an urban environment.

Not the answer you're looking for? Browse other questions tagged identification plant-recommendations tree-care pruning hedge or ask your own question.

4
How fast does a Thuja hedge grow after being burnt?
2
How can I rejuvenate my overgrown Elaegnus & Deutzia?
5
Can I grow a climbing plant as a trailing plant?
5
Repurposing this rhododendron
4
Making a leylandii hedge more bushy and thick
5
Converting Allamanda Blanchetii from vine to shrub
2
Best way of pruning Cardinal Creeper
1
Recommendation for low-light potted tree
4
When to trim ivy-full hedge to avoid bees and wasps?
3
How can I prune a dead brown inside overgrown confider leylandii hedge