How should I repot these overgrown and delicate plants?

I've got several plants that are probably overdue to be repotted. One of them is a cactus with lots of new growth and sharp spines. And the other is a jade where many more of the cuttings survived than I expected. With each of these, I can't simply grab the trunk to support it, and particularly with the jade, I worry that the weight of the soil will cause a lot of damage.

With the cactus, I've seen suggestions to wrap it in newspaper. And with the jade, I may be able to get a knife in there to separate the soil from the side of the pot.

Are there any other tips and tricks that can be used to minimize damage? Note, the pots are nice, so I don't want to damage them either.

Edit: For those unfamiliar with Jade, it looks like this with leaves that easily separate which can be stuck in the ground and they'll grow a new plant. I did this with a dozen or so leaves from a dying plant, expecting 3-4 to survive, and almost every one of them survived so I've got a crowding issue: 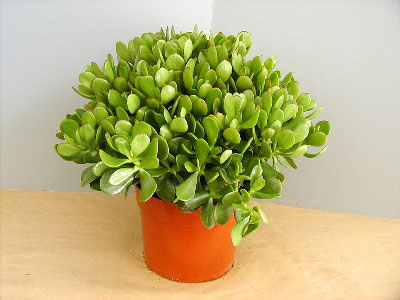 The cactus looks a lot like this (web site from the pic calls it a Mammillaria gracilis Preiff) and with all the new growth around the sides, I don't think I'll be able to get a knife in there: 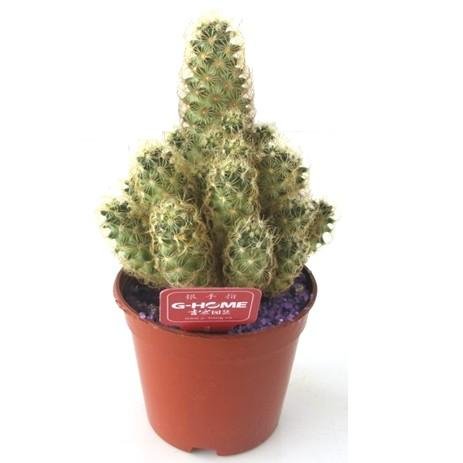 containers cactus jade
Share
Improve this question
edited May 18 '14 at 3:26

I don't know which cacti they are, but I just use gardening gloves. Yes sticking-out spines will go through them. The spines on a small barrel cactus or mammary cactus where they are wrapped around more, are less likely to go through gloves.

Usually I'm working with opuntia (see this question for photos), where the spines stick out more, but there are usually gaps between the spines where a pad can be held without being spiked. Opuntia are also pretty hardy when it comes to this kind of thing. They get a bit of a rough treatment if I'm cutting pads off for cuttings (depending on your cactus type, this might be something to consider?). Also the "cinnamon bunny ears" opuntia requires sacrificial garden gloves. It doesn't have spines but has nasty hairs that stick in the gloves. Often it is best to just throw the gloves out after use.

Newspaper does sound a good idea - especially if it is like a barrel or mammary cactus with the spines wrapped around. The paper should deflect them - the opuntia spines may still go straight through the paper.

So yes, I would try to loosen the soil and carefully pull the cactus out (wrapped in newspaper). Do the whole thing over newspaper to catch the soil and debris.

Yes the cactus looks like one where the newspaper trick would work. It is more of an upright mammary cactus to what I have (or see growing locally), but it has that wrapped-around "bird nest" pattern with the spines. I see there's some finger space around the base, so I think you should be able to turn it upside down and tap the root ball out of the pot.

You may be able to split the side growths off once it is out of the pot. A knife would help make a cleaner cut. (my opuntia don't seem to mind but as I say, they're pretty tolerant of a lot!) I looked in "Cactus" by Elisabeth Manke, Barron's. This says M. gracilis grows to about 4 inches. No specific propagation instructions, but says Mammillaria can be propagated by seed, grafting, or cuttings. I'm not a fan of cactus grafting - visually it never looks right.

If the jade cuttings took so well (sounds very much like opuntia in this respect), then I wouldn't be afraid of bits breaking off. If they do, you have more cuttings. Soon you'll be giving them away to your friends. Perhaps put fewer in each pot next time. Perhaps 3-4? (The optuntia pads are obviously a lot larger, but I plant those one pad per pot and get >90% success rate. )

Rather than the newspaper, I would suggest a regular bath towel. It's gentler on the plant, and you can double it over a number of times to avoid the spines. I've used this trick, it works well.

Not the answer you're looking for? Browse other questions tagged containers cactus jade or ask your own question.

12
How can I encourage a jade tree to grow a strong trunk?
16
How to help a Jade plant heal?
10
Do opuntia (prickly pear) cacti readily form hybrids in the wild?

10
Jade: Can I repot and/or take cuttings?
7
Why Hasn't my Cactus Grown Deadly Spines?
5
Should I Repot a Tall and Spindly Jade Plant?
6
Watering Schedule: Large Jade Crosby
7
What is this white crust forming on my cactus during the growing months?
5
What's this cactus with large red and white spines?
5
Why is my cactus so thin?
4
Jade tree trunk cut?
4
Is there way to encourage a jade plant to grow new branches from the woody trunk?
2
Are mature store-bought veggie plants like these intended to stay in their pots?