What is the fate of this sunflower? Will it produce seeds? 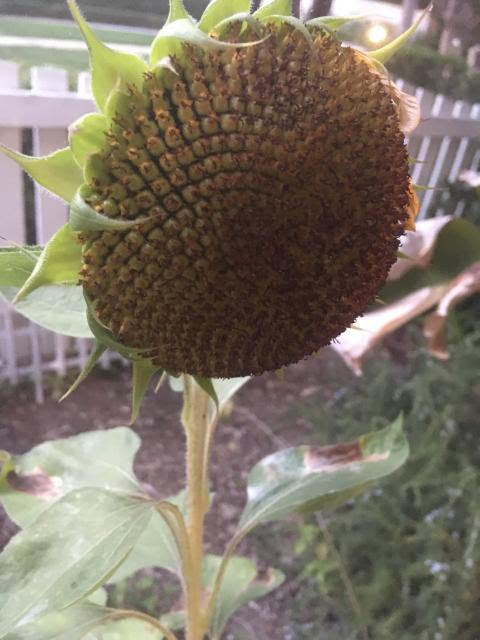 The sunflower in this picture is the only one that survived out of three that my kids grew from seeds as one of their school projects. At the end of the last school year, we brought them home, when the stems couldn't have been much bigger than 6 inches. The three lived happily in pots for several weeks, until they grew too tall for the 23 inch protective tent they were in, after which I planted them in the ground. Alas, two of the three succumbed very early in their lives, well before they flowered, to slugs or bunnies, or other critters that would do sunflowers harm. But the one in the picture grew enough to flower, and recently lose its petals.

The sunflower is probably around 80 - 90 days old at this point.

My question is: what is likely next for this sunflower? And specifically, is it likely to produce seeds? It has been visited by bees, flies, ants, and presumably other pollinators. But there are no other nearby sunflowers, and I was unclear: is "successful" pollination always strictly from one flower to a distinct other? Or if a pollinator picks up pollen from one area of the large sunflower head and lands in another area of the same head, does that "count" as pollination?

Whilst sunflowers are wind pollinated by other sunflowers growing nearby, they are also pollinated very effectively by insects such as bees, so yes, it should produce seed.

Many sunflowers are able to pollinate themselves using their own pollen in the case that they do not get pollen from a different plant.

Now that the ray florets have matured and fallen the seed should already be in place in the head. Look at the back of the seed head and if it has changed colour from light green to yellow then you can cut the head and dry it inside to ensure that birds and other critters don't get there first. Look carefully at the face of the head and gently rub the little buttons - you will find that the actual seeds are buried under a little cap which should easily fall off. The seed will either be a completely black seed (oil type) or a light brown with black stripes (striped seed type).