What is this plant and how do I get rid of it?

I live in the high desert shrub steppe of central Oregon. I recently tilled and sodded my back yard (which was previously just bare desert), and I have this unidentified plant growing in several places. 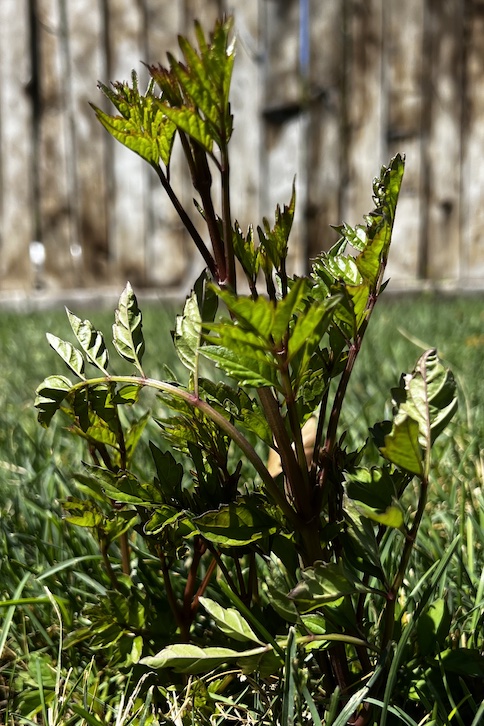 The stems are hollow and soft, so I figured they were just some kind of weed. But digging it up, I find that it's a shoot from a much larger root system growing horizontally underground. I'm guessing the several plants are actually a single, large bush or shrub? The growth above ground are the red, finger-like stalks at the top middle of this picture I took, and the main root underground is about 2" thick: 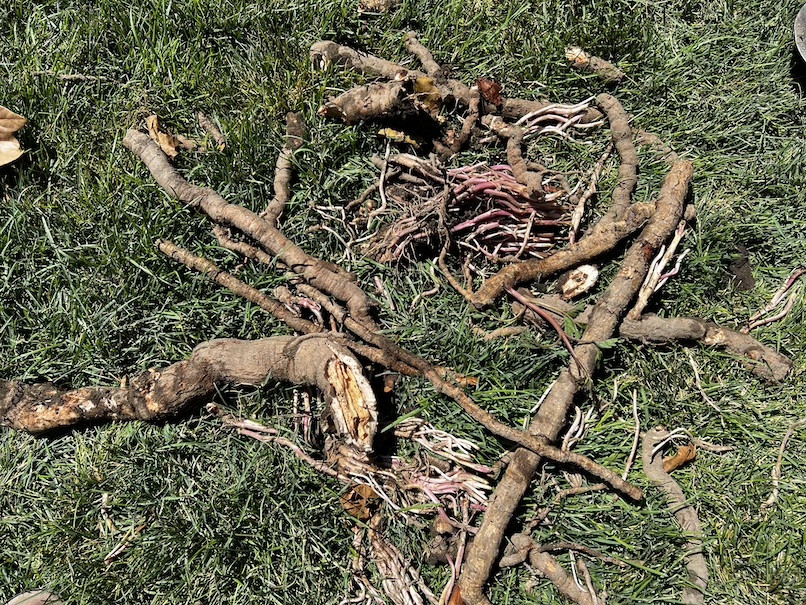 I've been watering like crazy since the sod is new, and this thing -- whatever it is -- is absolutely loving it. It's growing very aggressively and pushing up the new sod mats, preventing them from rooting down.

The thick part looks like it's been there for a long time, but I don't recall seeing anything like this when I tilled the land. My neighbor has a trumpet vine on their side of the fence. Could it be that? The leaves don't look similar at all and the main root doesn't seem to be coming from that direction.

How do I get rid of this thing? It seems to go on for at least tens of feet horizontally underground, so I don't think digging it out is an option.

The leaves actually do look like trumpet vine (Campsis radicans). Its aggressive roots and heavy spreading of its seeds (via birds) are why it has been banned in at least a few states as an invasive species. To kill the root, you're going to need a chemical called triclopyr, which I can attest to being definitely effective against trumpet vine. Dig as many roots as you can, cut them off and then paint the triclopyr on the cuts. Note that this probably will also kill your neighbor's vine because these roots are probably coming from it, although it's possible that they're coming from a different vine in a neighboring yard or vacant lot.

My first impression was the plants are peonies. There is a photo of peony roots on this page. Dig up all the roots, every piece.