Ok so my property is in the US/NH and I've slowly clear back some land and brought back a bunch of wild high bush blueberries to health. There is one bush which is still pretty shaded that I don't think is a blueberry any longer. While it looks like the leaves and bark are the same as a blueberry it just has brown "seeds"/fruits. These look white as seen below in an earlier stage.

So my questions are: 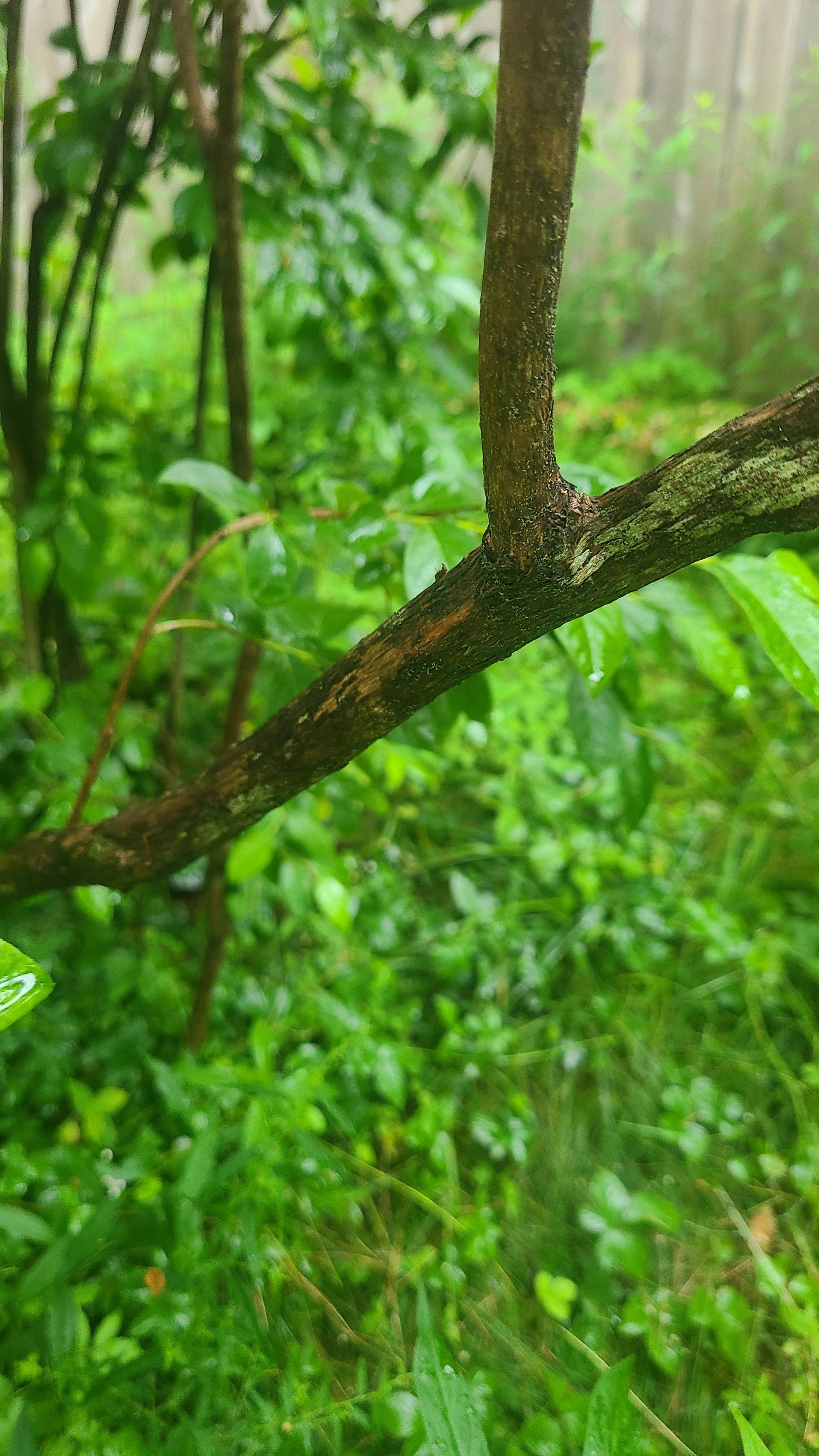 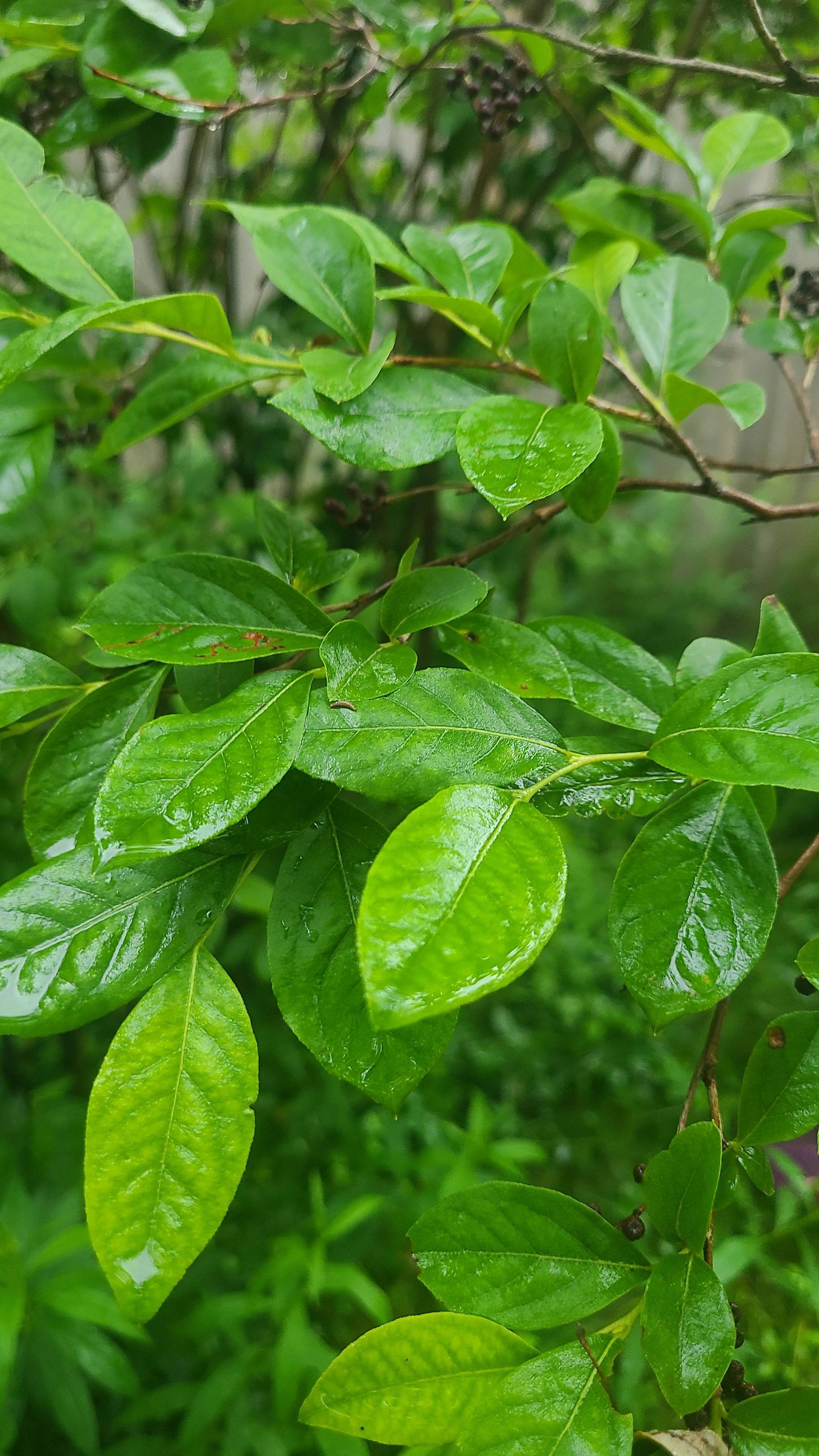 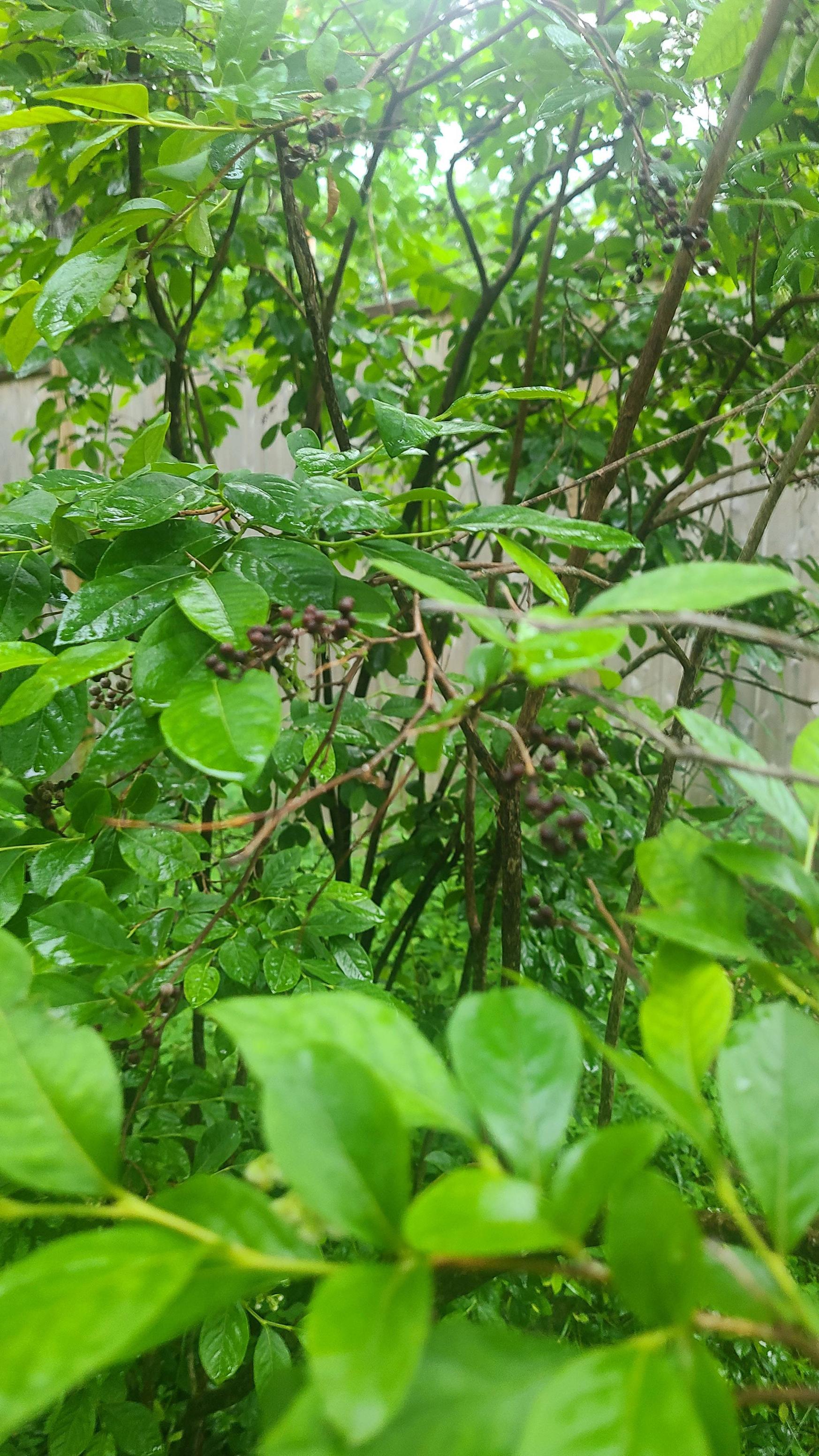 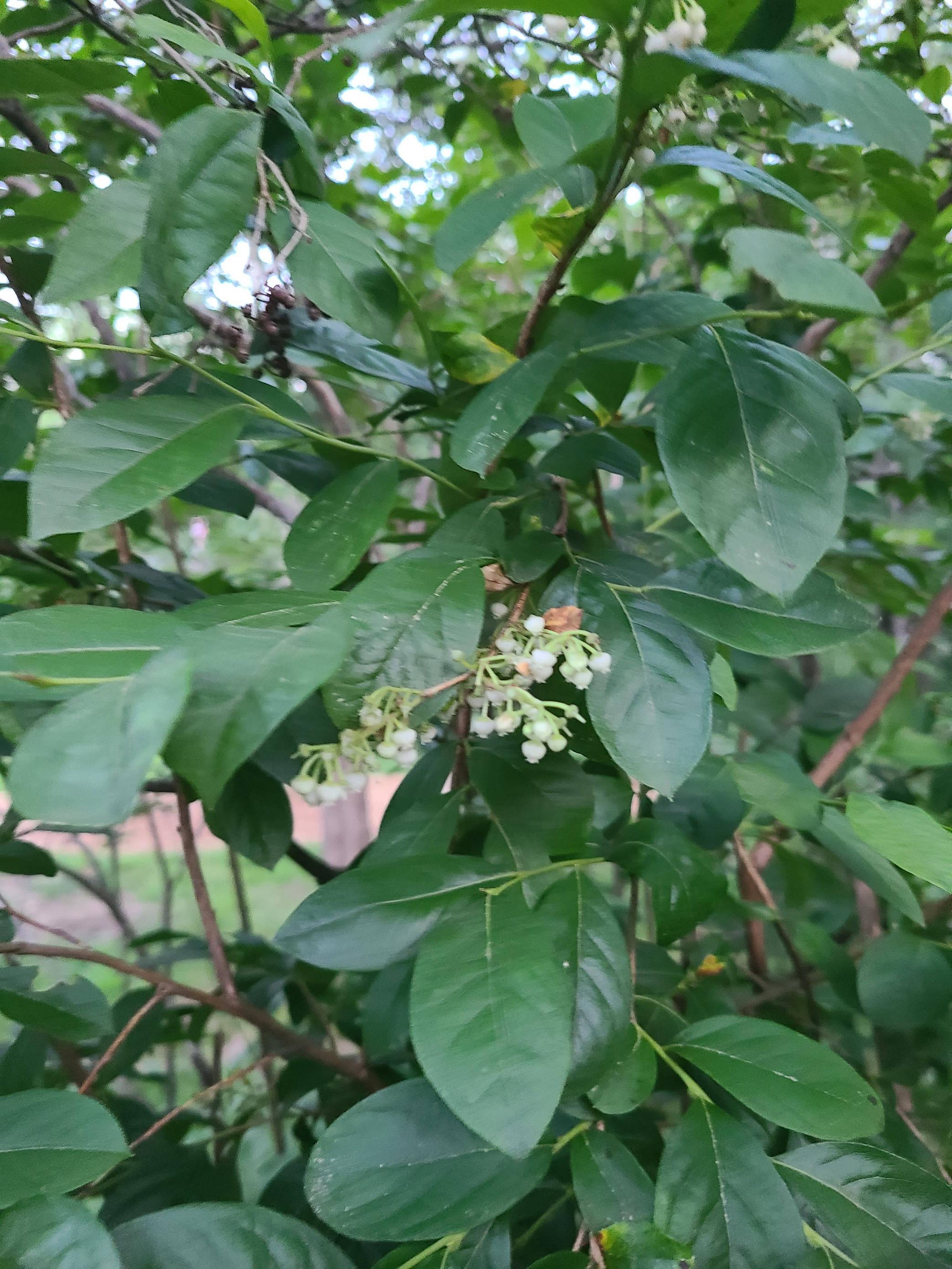 No it is not a blueberry bush (Vaccinium corymbosum) which typical has smaller leaves and not completely black berries. (I miss an indication of the size of the leaves, but they look like more than 2 inches long)

Based on the location (New Hamshire) I have three suggestions:

Vaccinium fuscatum is an upright deciduous shrub. It can be distinguished from the similar-looking Vaccinium corymbosum by its stems and abaxial leaf surfaces are pubescent with dingy hairs, and its dark colored fruit that lacks a glaucous coating. In addition it has an earlier bloom time, producing flowers in early spring. It is sometimes considered a synonym of Vaccinium corymbosum.

This shrub grows up to two meters (80 inches) tall. The plant spreads via rhizome, sprouting up new stems to form colonies. The leaves are up to 6 centimeters (2.4 inches) long by 3 cm (1.2 inches) wide. They are hairy and glandular. The inflorescence contains 1 to 4 flowers that hang on pedicels up to 2 centimeters (0.8 inch) long. The flower is bell-shaped and greenish white. The fruit is a juicy, sweet-tasting drupe which is usually blue but may be black or white.

Gaylussacia baccata closely resembles the native blueberry plants (Vaccinium species) with which it grows in the same habitats. However, it can be readily identified by the numerous resin dots on the undersides of the leaves which glitter when held up to the light. Gaylussacia baccata is a shrub up to 150 cm (5 feet) tall, forming extensive colonies. Flowers are in dangling groups of 3–7, orange or red, bell-shaped. Berries are dark blue, almost black, rarely white.

(Emphasis mine to help identification)

The suggestions are based on the assumption that

They was chosen because the flowers definitely indicates the Ericaceae family, and the berries indicates the Vaccinium genus or a closely related genus. I have several different Vaccinium corymbosum bushes in my garden and based on that experience I feel very sure, that it is not this species - but certainly they do resemble each other.

It is not unusual to find ill-looking areas on older parts of bushes. You should only be concerned if younger parts (including new leaves, flowers and berries on old stems) seems to be affected. At the photos the berries look healthy. Diseases usually cause ill-looking spots on the berries and/or they will drop off. A recent problem is mainly seen at the west coast and the photos shows clearly orange spots.

I do not think any other listed diseases fit the situation.

They exist and I have a pink one

How to investigate the bush in question further:

If you carefully compares flowers, berries and leaves to a bush you think is V. corymbosum, I think you quickly get an indication of any differences.

After taking some more images and resorting to google image search I found out this is in fact a Maleberry shrub (Lyonia ligustrina). Very similar to the blueberry but different. Thanks for everyone who took time helping. 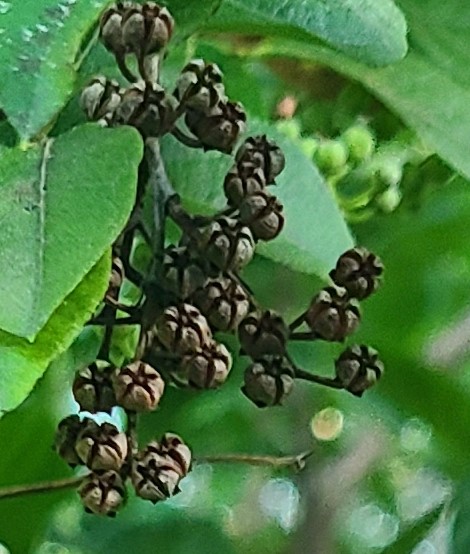 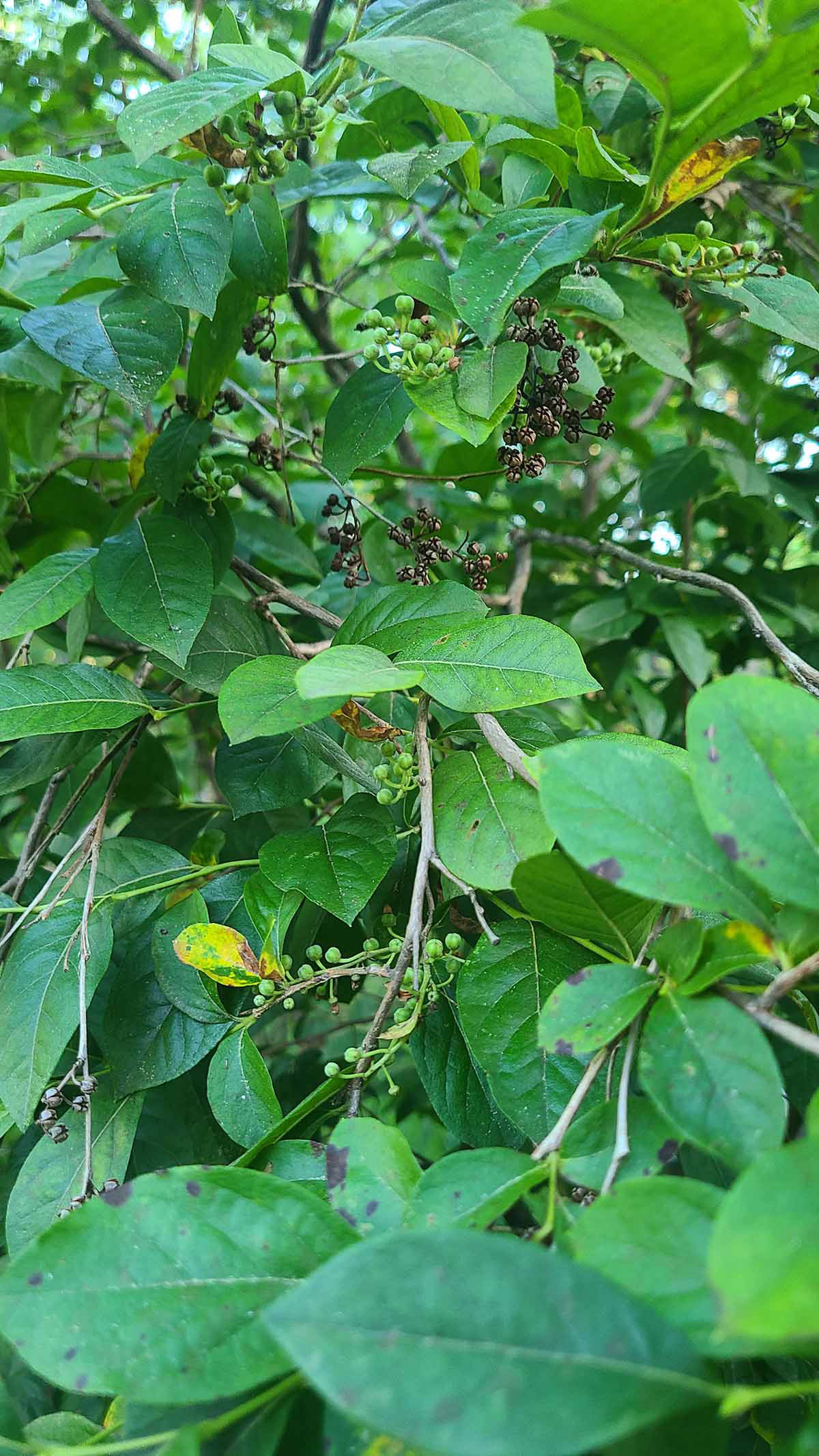 Not the answer you're looking for? Browse other questions tagged fruits blueberries or ask your own question.