What is wrong with my mint?

I got these organic mint starts from another garden. They started to have flecks of mostly brown underneath the leaves and some on top. I tried pulling off the effected leaves and then in one instance cut the plant way back. Most of the plant looks healthy but the spots are starting to take over again.I had been spraying the leaves w/water and stopped that after reading it could be mint rust. I also tried a baking doda dish soap mix. What is wrong with my mint? 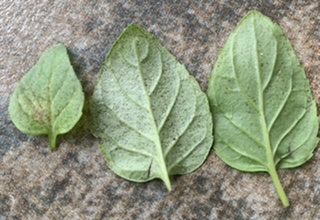 I can't see the pictures very well but it seems like you have a four lined plant bug( Poecilocapsus lineatus) problem. I've had the same thing happen to my mint patches and I actually saw them, they are very difficult to find and almost impossible to catch. Is the mint planted in the ground? The bugs usually make slits at the base of the plants to lay their eggs and then when they emerge they feed on the leaves but not by chomping away like caterpillars it's more like they suck the juices out (to put it simply). The nymphs don't do much harm though and would barely be noticable if not for the adults. I am a little bit anxious about giving this answer because usually the damage stops in July at the latest. They only live for one cycle a year and die off after about a month from emerging. Then there should be no more problems until the next year but you have plants infected now ( it could possibly be the aftermath of the damage as it sometimes takes time to see it) The best way to stop them is to pull the plants and toss in the garbage bin or cut them very far back as to remove the parts where the bug laid her eggs. I wish I had tossed mine originally because they have infected several other plants in that garden. Good luck I hope this helps!

Not the answer you're looking for? Browse other questions tagged diagnosis pests plant-recommendations mint or ask your own question.