Can anyone identify this flowering plant that mysteriously appeared among several 'weeds' in a pot?

My photograph shows the flower, and a few leaves, of a plant that mysteriously turned up in a pot that had previously housed other plants. Originally I saw it as a weed, but decided to 'wait and see'. It eventually reached a height of approximately 18", at which time the first flower appeared, followed by the second one. No noticeable flower-perfume. Don't know whether the plant is annual or perennial. Some of the lower leaves are red -- could be pre-autumn colouration [?]. 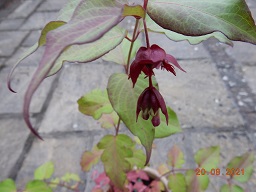 It seems to be Leycesteria formosa, a deciduous shrub with the common name pheasant berry or himalayan honeysuckle. It's not uncommon for it to pop up on its own https://www.gardenersworld.com/plants/leycesteria-formosa/