What is eating my strawberries? 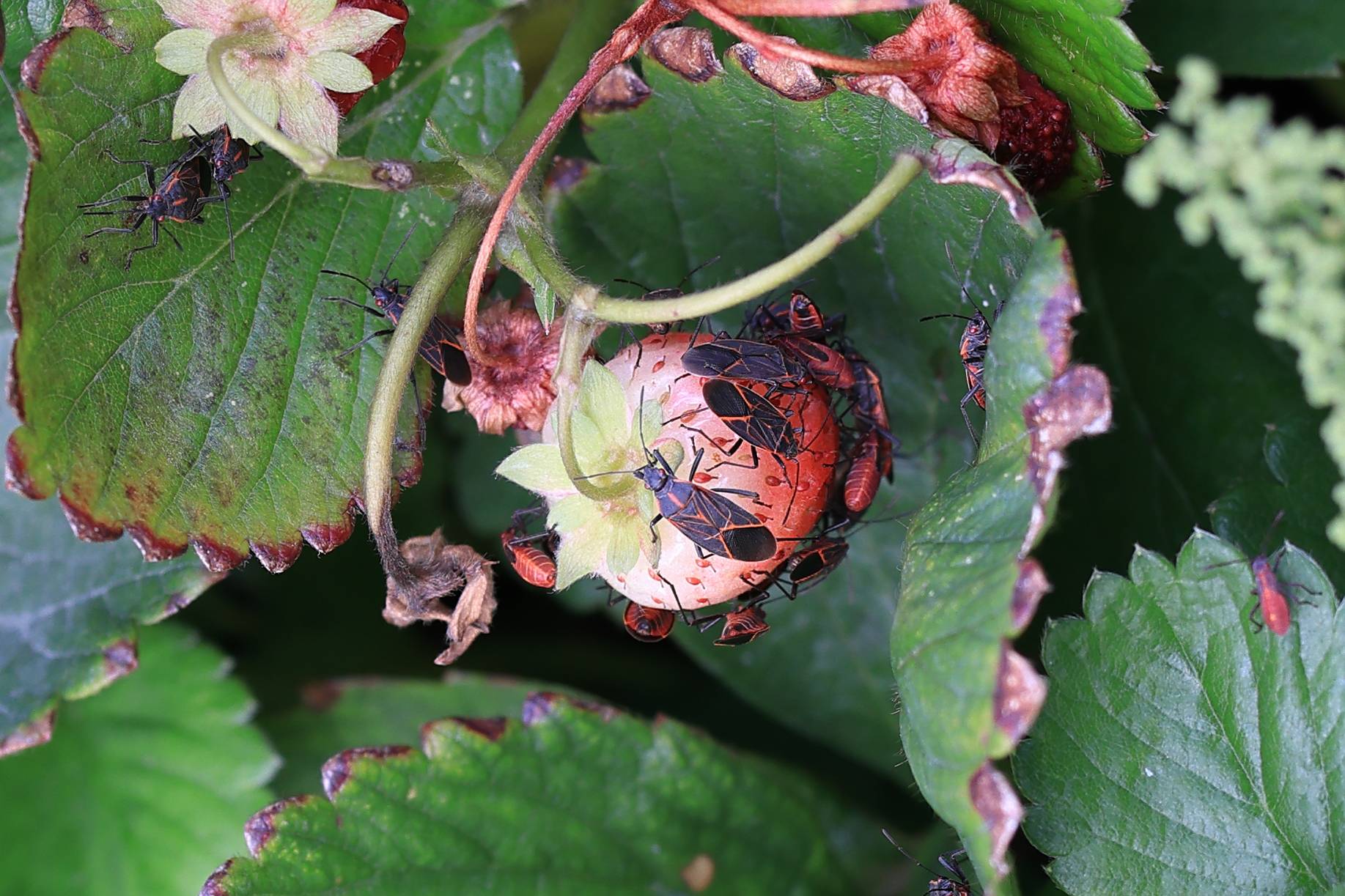 I think these are maple bugs, but I have never seen them in the garden. Do they normally attack a garden? They are after the strawberries, squash and tomatoes. I am in British Columbia, Canada, in the interior, Mid Fraser area.

They're also called Box Elder Bugs. Here's a fact sheet from the University of Minnesota which also shows them as feeding on plants and fruits in years with particularly large populations. Large populations tend to occur when there is a warm spring followed by a hot and dry summer, which I think matches your weather this year. There is no real control for them (we're mostly concerned about keeping them out of our houses in the fall). Anecdotally, I can state that the bugs like to hang out next to houses in gardens mulched with fabric and rock rather then those mulched with wood chips.

According to Wikipedia, these bugs don't normally feed on berries, but it does happen (emphasis mine):

Although they specialize on the seeds from maple, boxelder and ash, they may pierce other parts of the plant while feeding. They are not classified as an agricultural pest and are generally not considered injurious to ornamental plantings. However, they are known to damage some fruits in the fall when they leave their summer quarters in trees and seek areas to overwinter. Feeding by the bugs produces dimples, scars, fruit deformation, corky tissue, and even premature fruit-drop in strawberries and some tree fruits.

Other web sources (no point listing them all) seem to confirm this, and it seems to be what is happening to you. From what I can gather, they shouldn't be a huge issue to your garden, though. If they are, I would suggest visiting a local gardening shop and asking about pest control (ideally not chemical, but according to Wikipedia it seems they don't have a lot of natural enemies, so you may have no choice but to use an insecticide soap or something stronger).

Be warned that the bugs seem to have a tendency to hibernate indoors, so you might have an indoor infestation in the future if you don't take care of them before that.

Not the answer you're looking for? Browse other questions tagged identification bugs strawberries or ask your own question.

12
What animal is eating my cherry tomatoes and strawberries?
7
What is this grub-like bug that's eating my eggplant leaves?
4
How should I propagate day neutral strawberries which don't develop runners?
6
Can I accelerate the ripening of strawberries?
2
What is this bug? Is it a pest?
1
Help me identify this bug with red belly hanging around garden pots
2
What are these little balls (green, yellow, orange) in my potting mix?
1
Can anyone help me identify these bugs destroying my garden please?