What can I plant along a fence to combat grapevine?

There's a 4' chain link fence between my driveway and my neighbor's driveway with about 2' of space on either side for plantings. Currently there is nothing specific planted in the space, and every summer it becomes completely overgrown with grapevine, which I cut back as best I can. I had thought of planting blackberry, raspberry, or something else in this space -- something that could climb the fence and hopefully give the grapevine some competition. Even if it doesn't beat out the competition, at least after I spend effort pulling out the grapevine each year I'll have some fruit to show for it!

Is this strategy likely to be successfully, or is there another fruiting plant I could try?

The fence (proposed raspberry would be in the section between the gate and the garages): 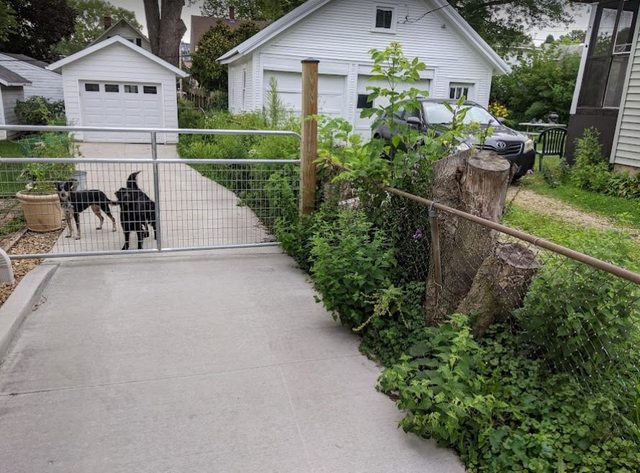 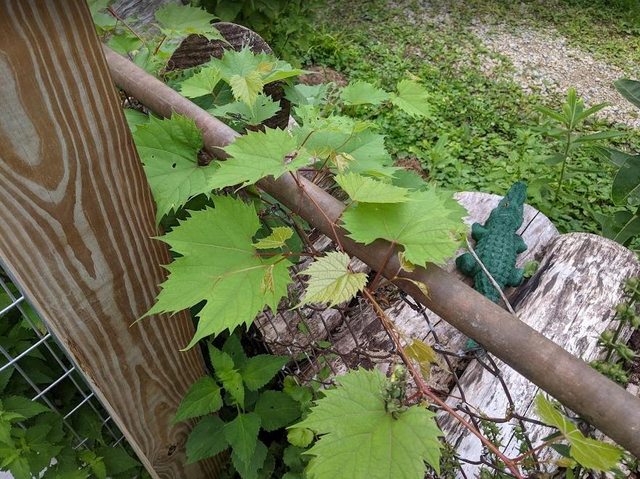 I live in southern Wisconsin as well. I think you should avoid blackberries, because they get awfully tall, usually contain very nasty thorns, and will certainly arch over a good portion of the driveway. Yes, the thorns can scratch a car. And your furry friends.

Raspberries could work - they'd certainly cover the ground on both sides of the fence. I'd recommend putting down a 1-2" thick layer of wood chips when you plant the canes - you probably won't need to renew the mulch, especially if you can drop leaves into the canes each fall as a mulch/fertilizer. They, too, though will arch into the driveway, although I doubt that their thorns are nasty enough to bother your car or dogs.

Another option is red currant, but you'll probably need to cook them and add sugar if you want to eat them.

Your biggest issue, though, is going to be snow load. Obviously, you're going to be putting snow there (well, either you, Mother Nature, or both). This snow will crush things like black currants, gooseberries, blueberries, and probably red currants. You MAY have luck with raspberries, in that the canes will collapse onto the ground and maybe not break. To be on the safe side, you should get everbearing raspberries if you go that route (June-bearing won't bear if all the canes break in the winter).

None of these are great solutions, I think.

So, here's the radical idea - replace the grape vine with... Domestic Grape Vines! Grapes obviously grow well there, and you can get a decent selection of Wisconsin-hardy table grapes (Catawba is my favorite). The sun exposure is good enough, and it looks like you'll get enough wind to avoid the major fungal diseases. The snow load will insulate the crowns, so you can definitely go for Zone 5 varieties, and it won't hurt the woody vines twined onto the fence. The only possible drawback is the height of the fence - it's borderline too low. Another consideration is maintenance (training the vines, pruning in spring), but you'd have maintenance regardless of the fruit you plant.

And finally, a not-quite-as-radical idea: plant small fruit trees on one side of the fence and a very low ground-cover on both sides of the fence to deter weeds. An excellent and little-known groundcover is Mazus reptans (no common name that I know of). I planted it along my neighbor's driveway, and it filled in completely in less than two summers. Very pretty blue flowers in May (just don't use salt in the winter). Not a native, but step-on-able and easy to maintain. You could also use a creeping or wooly thyme. As for the fruit trees: plums, vertical "stick" apples (no branching), dwarf easy-maintenance apples like Liberty, and cherries (example variety: Meteor). In most cases, you can trim the trees high-enough to allow a car to pass without hitting a branch (plums and laden apple trees may be heavy enough to drop the branches into the path of the car, however).

Avoid American Plum because they're stoloniferous and would likely appear in your neighbor's gravel driveway.

One final point - regardless of what you do, you have to kill the grapevine first. Nothing will out-compete it. I'm guessing you don't want to use herbicides, but in this case you'd be best off buying a small container of Stump and Brush Killer (go to the nursery whose name begins with "J" on Verona Road or in Sun Prairie, not a box store). The chemical is called triclopyr. After you cut the vine about 6" from the ground, you just brush the chemical onto the stump. This is a highly targeted application and it will not affect any other plants, insects, or your dogs.

Since you are in USDA Zone 5a, you will need some cold-hardy vine plants. I would suggest you choose the following plants.

You can choose any vine, that totally depends on your personal preferences.

Nothing beats a grape vine from how I have seen them grow in IL and TX. You can find something to co-exist with it such and the rose and trumpet vine as suggested, but nothing will crowd it out. It is also possible to get enough growth on the cyclone fence to eventually pull it down. Grape is very sensitive to weed killer ,2,4,D, etc.

Not the answer you're looking for? Browse other questions tagged grape-vine raspberries climbers or ask your own question.

8
How can I deal with the beetles eating my grapevine?
4
What would cause only one cane of a raspberry plant to show nutrient defficiency?
3
What breed/variety of grapes can be easily grown in the Philippines?
4
Leaves are dying slowly on Raspberry plant-what on earth is wrong?
0
How close can i plant perennials to a grapevine?
1
How close can I plant a clematis to a small climbing rose