Why is the color fading on my variegated rubber plant?

The normal vibrant color is fading from my variegated rubber plant. I've made the mistake of overwatering it in the past, but was about a year ago. Is this a residual hangover from that time? Or is it something it's craving that I can add to the soil? It was sprouted new, vibrant leaves in the past few months (you can see the contrast in these images). I simply want to keep her happy and healthy, and want to be doing more if I can keep her nourished. 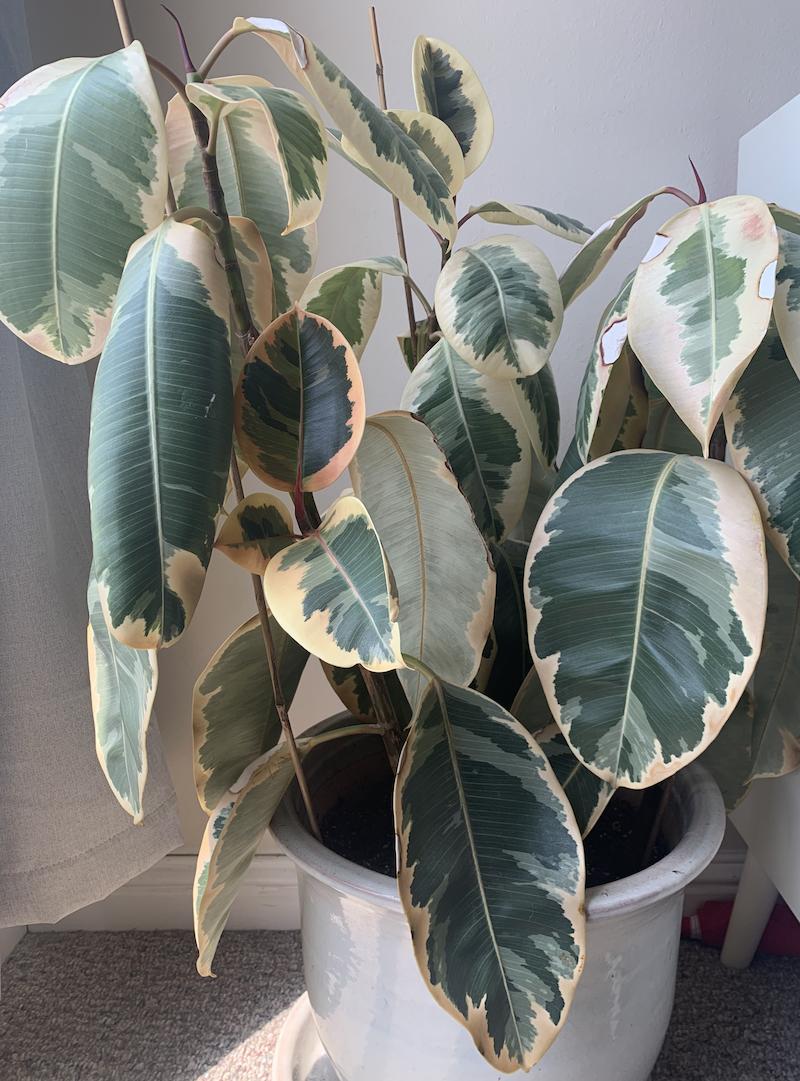 Overwatering can do long-term damage to rubber plant foliage (even just one overwatering).

I have a non-variegated rubber plant that was droopy and not as vibrant as it could be; it looked a lot like yours, sans the variegation. The solution to the coloring problem and lack of growth seemed to be to give it a houseplant dose of 24-8-16 All-purpose Miracle Gro once every two weeks for a while (if not longer than a while). My rubber plant seems to like that particular fertilizer more than any other mixture of fertilizer I've tried. Specific ingredients in the fertilizer that weren't in other stuff I've tried include the copper sulfate, zinc sulfate, manganese, potassium chloride (I've tried potassium sulfate), sodium molybdate, and urea (I've tried ammonium sulfate and calcium nitrate, at separate times, which were both beneficial, but by themselves, they didn't green as much). I've given it some other stuff, including various minerals and phosphorus/potassium with little impact.

As far as the curling leaves go (same for if they start to rot), that's probably caused by overwatering (or having standing water in the tray). Rubber plants really don't seem to like that. Mine curls if any water at all leaks out into the tray.

My plant was healthier and less prone to issues before I gave it basalt rockdust some years ago (so, I don't recommend ever giving it that, especially as I think they're supposed to like acidic soil, and rockdust is alkaline). You might test your soil to see its pH. Make sure you don't add alkaline calcium products to the soil.

Applying Miracle Gro regularly will quite possibly help to acidify the soil over time. Some fertilizers do that, anyway.

Applying too much Miracle Gro is easy to do, and would probably hurt your plant. Be sure to pay attention to the measurements and use the small end of the scoop, and depending on the amount of water you're using you may not use a full one.

You can tell the plant needs nitrogen, because the leaves aren't shiny. Miracle Gro will provide that and more (and the more should help it to green better than nitrogen alone). Nitrogen is the most well-known fertilizer component for greening, but several other substances are needed for optimal greening.

If there are wood chips in your potting mix, then they'll be using up nitrogen to rot (so nitrogen fertilization is more important in that scenario).

If overwatering and lack of nitrogen aren't the problems, I might guess it's getting too much direct sunlight, considering the plant appears to have sunscald (but I'm not sure how a rubber plant with too much sun behaves, offhand). I've read that bright, indirect sunlight is best for them. So, right next to a north window should be good (a south window would provide direct sunlight; so, if it's in a room with a south window, consider putting it further away from the window, or else in a different room).

Not the answer you're looking for? Browse other questions tagged trees houseplants figs or ask your own question.

4
Staking a Weeping Willow
3
Why is my snake plants' leaf fading in color?
5
Should I prune this new olive tree?
3
Why are some leaves on my Schefflera turning yellow and falling off?
5
Why are the leaves on my pink Aglaonema fading and turning yellow?
3
Can I save my Dwarf Umbrella (Schefflera) Tree?! It's suddenly dying (possibly my cat?!)
2
The cause of the pine needle fading
1
How do I tame my Dwarf Umbrella tree?
2
Help me save my Variegated Rubber Plant 'Variegata' (Ficus elastica)