Tomatoes: what is causing leaf discoloration and brown spots on plant? Blight, fungus, or something else? (Pictures Included)

Second-year gardener here and first time poster-- happy for any direction, criticism, or even duplicate marking.

Planted In: Municipally-sourced compost. We planted several plants in this soil last year and had great production. We pulled the plants at the end of last season and dropped them in the municipal yard waste collection (which becomes the municipal compost). We did not lay any new soil this year and just planted in the same soil from last year.

We planted twelve tomato plants this year; a few weeks later I noticed that one was failing to thrive, and was quite smaller than all the others, and its leaves were discolored and shriveling. I pulled out the plant and replaced it with a new one from the local farmers market. Now, a month later, the new plant is suffering from a similar issue, and it appears to be spreading to our new, rather large and mature tomato plants. 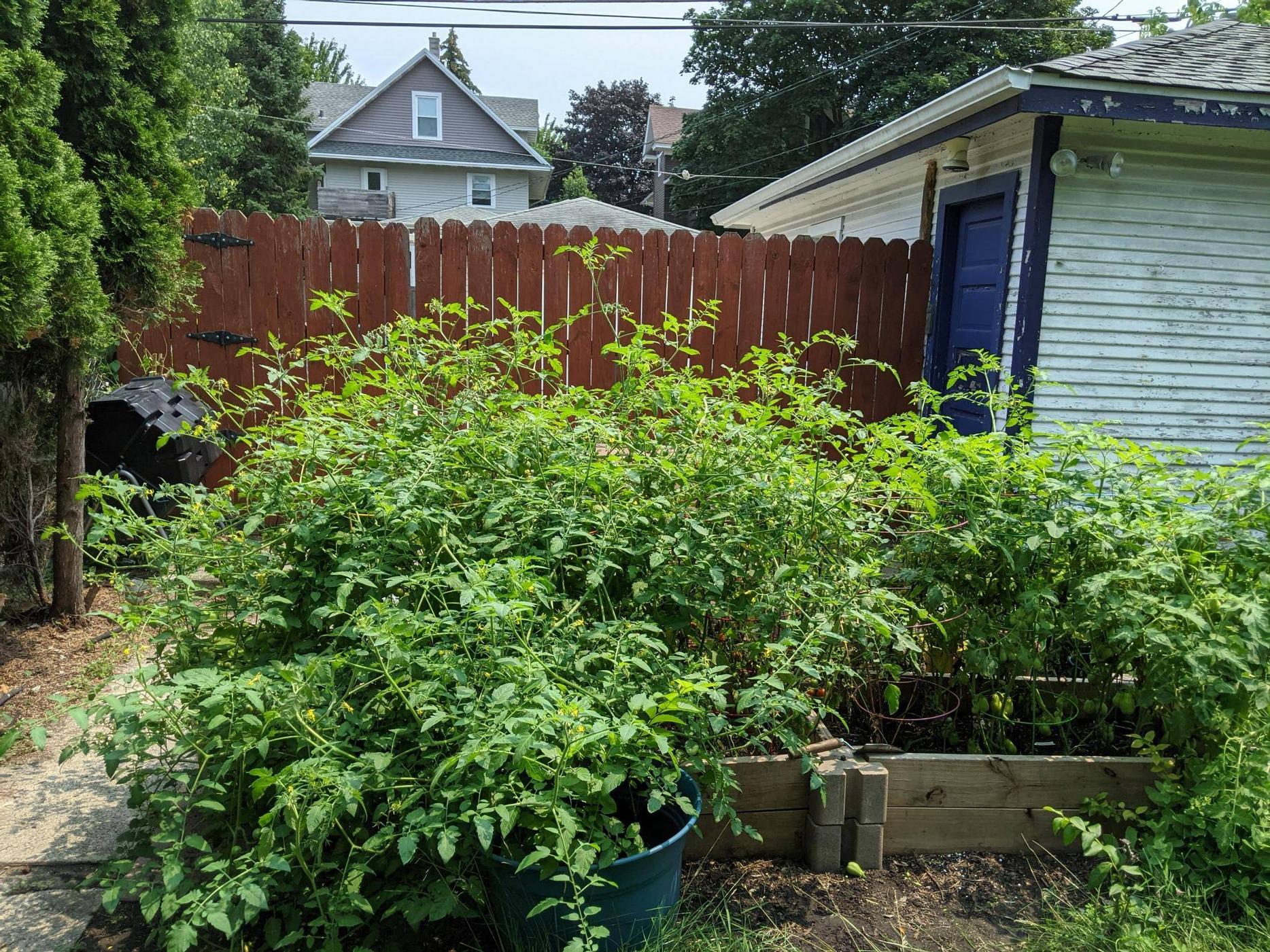 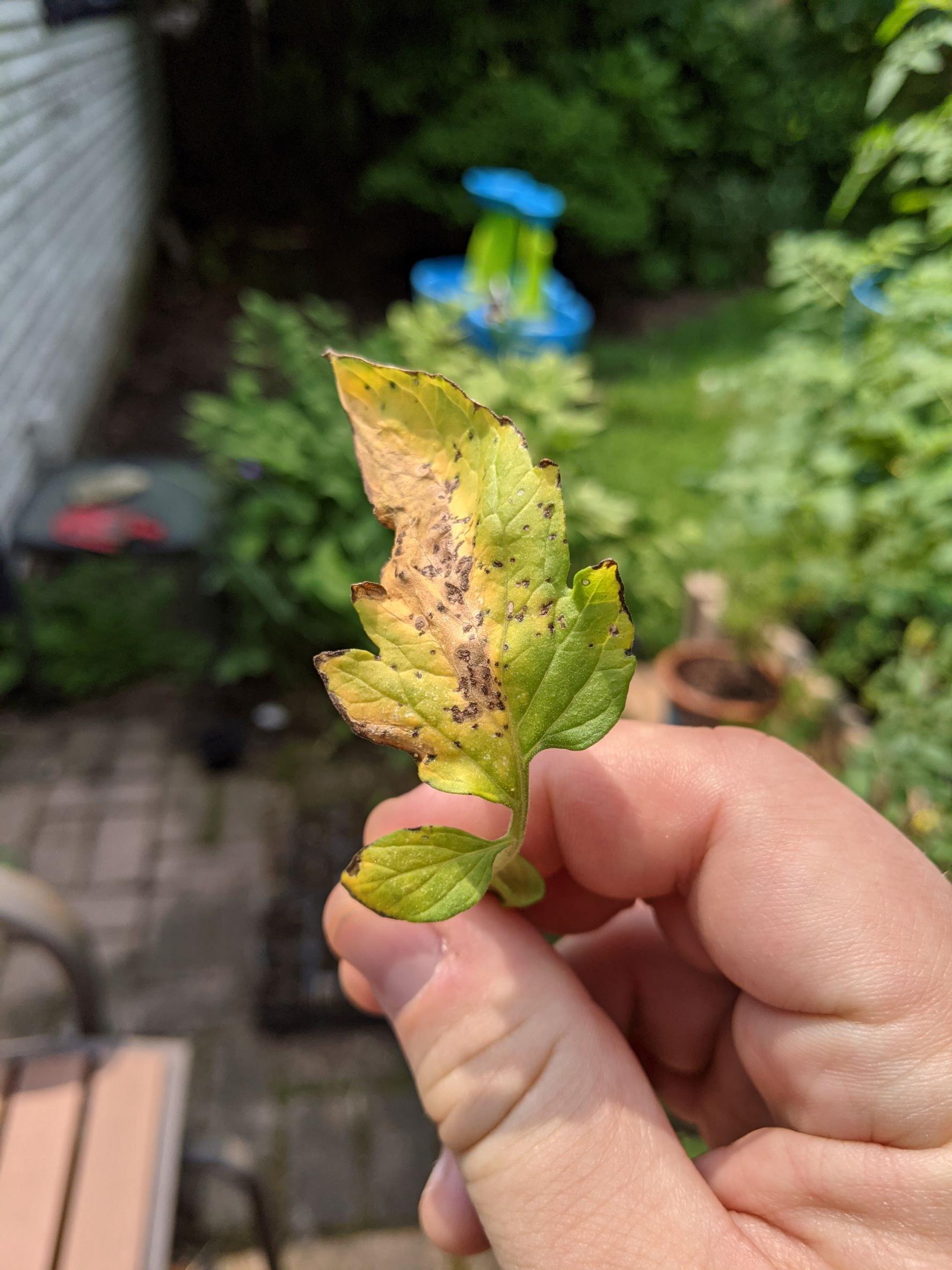 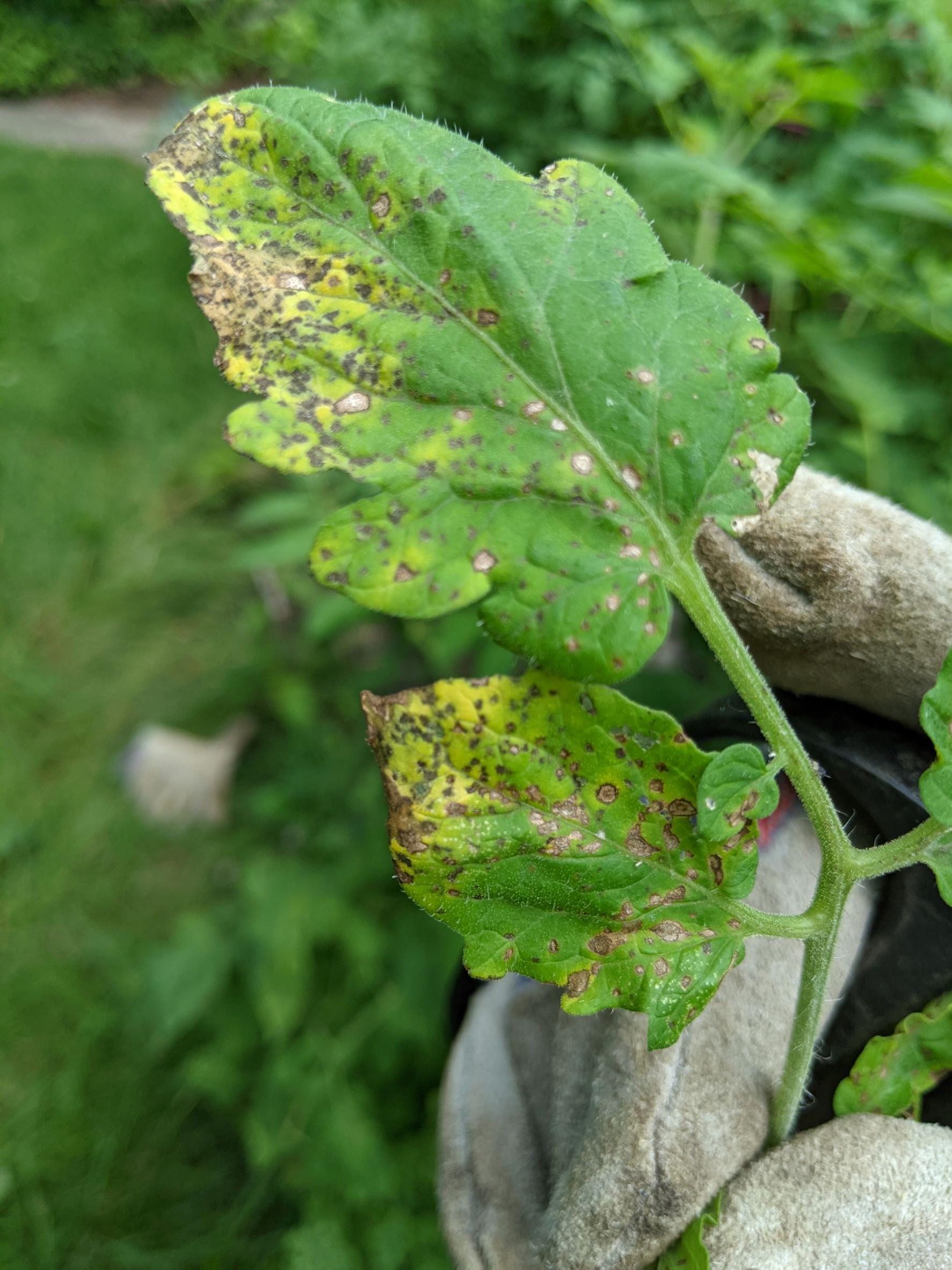 Here's a stem, which also appears to be browning: 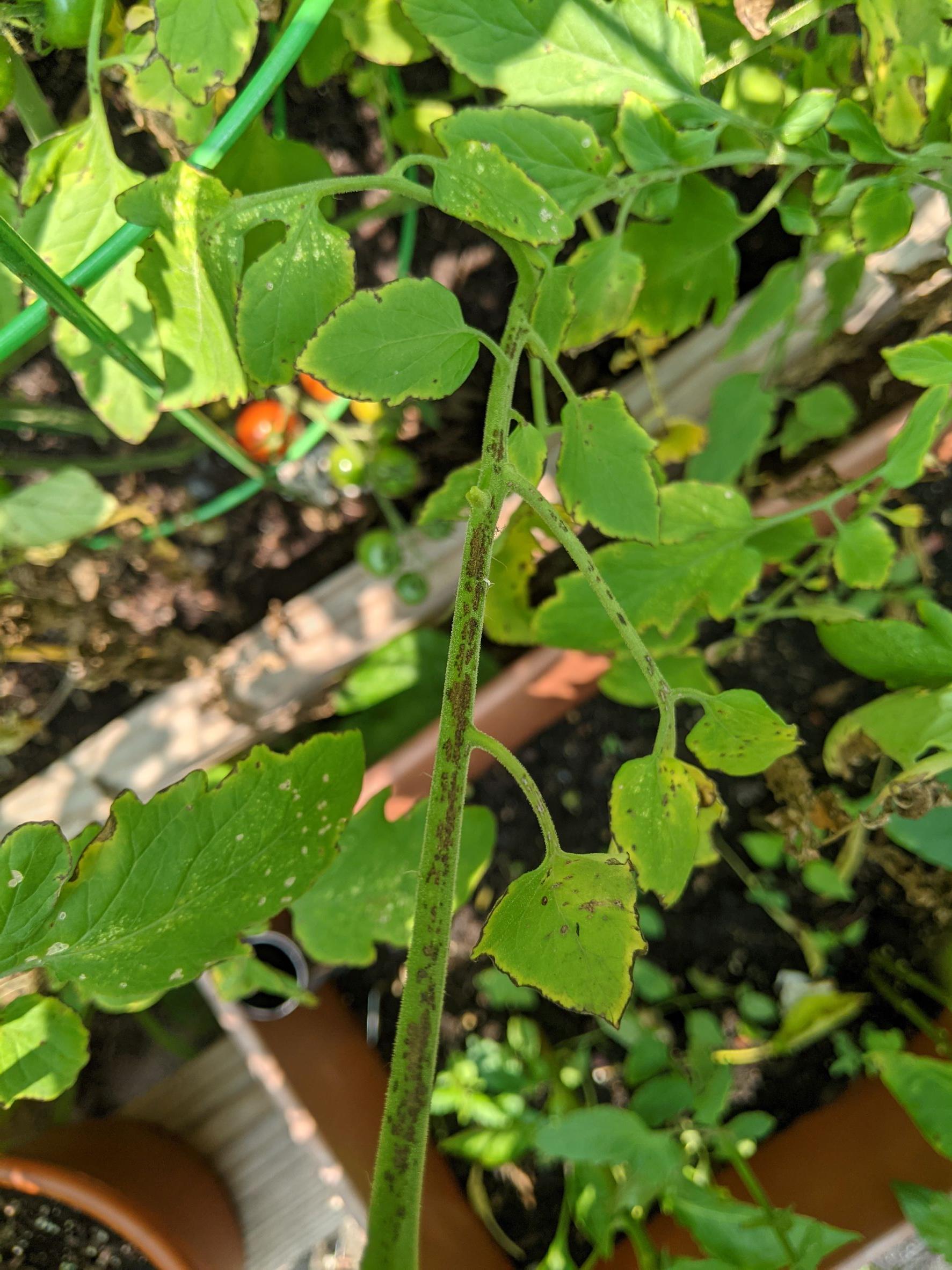 I tried clipping away the affected bits, but I began to worry perhaps that wasn't the appropriate approach. Google lens gave several possibilities, and one was a fungus where the recommended treatment was "discard all plants". However, several of these plants are quite large and already have tomatoes that are starting to turn red- maybe it would be worth getting through the end of the year with what we have and then figure out how to prevent this next season?

So, my questions are:

Any direction is appreciated; I can provide more info or images if requested. Thanks!

The issues with your tomatoes look like a fungus. In our area (I'm in very south-central Wisconsin), septoria is the most common fungal disease of tomato (we're actually lucky, as early and late blights are far worse diseases). I've had this issue for many years and only just last year figured out another possible vector for spread of the disease from year to year. I never pull plants because of septoria unless they're nearly dead, which is very late in the season anyway. Here is some general advice:

And now, here's the bit I figured out last year... Note that this is anecdotal only. Seven years ago, I moved to a new house and made a vegetable garden where lawn had stood for at least 10 years. Because I was essentially using fresh soil for the vegetables, I thought "hey - no septoria any more!" I brought my concrete mesh tomato cages with me from a garden that had septoria in it and, to my disgust, had tomatoes with septoria. For six more years I followed everything that I wrote above and could not shake the septoria. I should point out that when a tomato gets a fungal disease, the leaves die and dry while resting on the tomato support. I got to thinking that maybe my supports were actually vectoring the disease, even though I could find nothing either pro or con for this idea. This spring, I washed down the supports with a 15-20% bleach solution and, so far, have no septoria or leaf issues of any kind. There is one caveat - it's been pretty dry here, but I have watered and, I've watered late in the day, so I'm confident and hopeful that my bleaching of the cages has worked.

Here is some information from the University of Illinois Extension that may help you. Note that it appears to be at least 10 years old because it recommends a "fungicide regimen", which is of the "better living through chemistry" old-timer school of thought. Minnsota's extension seems to have better information. You could also look at Iowa State's and Michigan State's Extension sites (avoid Wisconsin's site; it appears to have not been updated since the 1980s and 1990s). Books like "The Wisconsin Garden Guide" will also provide great regional information.

Cleaning the tomato cages with bleach seemed to work very well until the Nig Beef variety got septoria high up on its leaves (so - an airborne infection, I think). Things looked okay for awhile, then we got 3" of rain in 24 hours; a week later, all tomatoes had septoria. :(

Any spots like that and I assume it is a fungal infection. Tomatoes are such fickle plants. I had issues with Septoria Leaf Spot for years in a raised bed. The spores over winter in the soil and get splashed up onto the lower leaves when it rains. The jump up from lower leaves to higher leaves every rain.

I have also never seen it jump to my pepper plants in the same bed. I also use the same soil every year. I add Tomato Tone every year, along with mulched leaves to encourage earth worms.

I started to put down 2 or 3 inches of grass clippings as mulch and have not had a single issue since. The mulch prevents the spores from splashing up onto the leaves. I also diligently trim any leaves within a couple inches of the ground to prevent contact. You have to keep the grass thin around the plant stems as it could bake them as it composts and gives off its moisture. I learned this the hard way. It will break down after month or so; I just reapply a new layer every few weeks.

As far as these plants go, I would trim off any infected leaves that I could, even sacrificing a plant and collecting its fruit if need be.

Not the answer you're looking for? Browse other questions tagged identification diagnosis plant-health leaves tomatoes or ask your own question.

19
When will my tomatoes be ready to harvest?
8
Should I remove tomato plant leaves to Increase yield?
9
"Volunteer" tomato plant in my vegetable garden - good, bad, indifferent?
3
Lower stems on tomato plants turning brown
5
What is causing yellow and brown blotches on my Roma tomato's leaves?
5
Why are the leaves on my tomato seedling turning brown?
3
Tomato Mosaic Virus
1
Why are my laurel plant leaves turning yellow and brown?
4
Pepper plant top leaves deforming