Following up on this question, I took a few pictures today of the perennial ryegrass on our lawn. The lawn was last mowed five days ago. The stems grow thick and very fast, making the perennial rye visibly taller than surrounding fine fescue.

Overall view: notice how much taller the greener grass is than the surrounding. 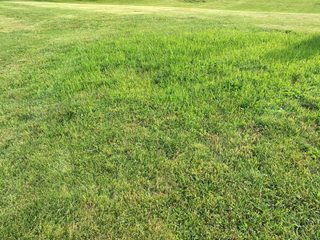 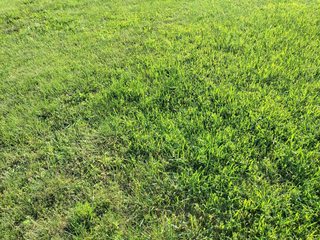 Another angle: last week is hot, so some of the lawn has turned brown. 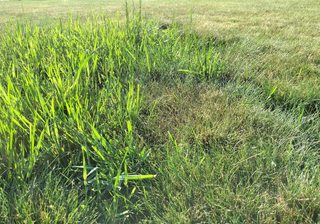 A close-up view: notice the height difference and the stemmy growth. 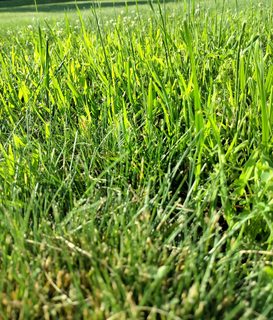 Further zoom-in: notice how the blades that were cut five days ago didn't grow, but the stems did. 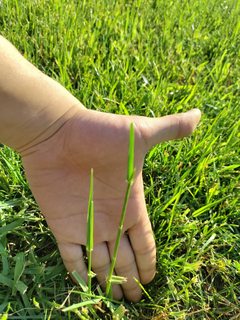 Any reason why this is happening? Or is this simply due to inferior seeds? What types of rye grow like this?

UPDATE: A picture of the root. 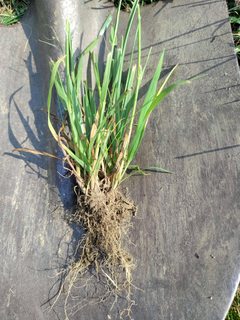 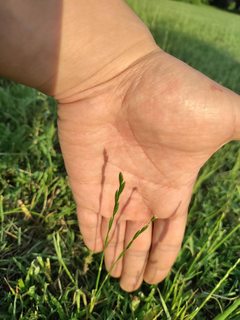 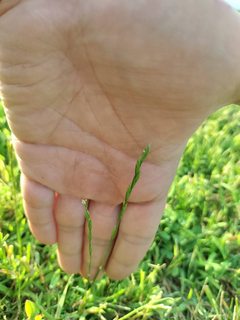 Based on the added photo of the plant with roots, you have a bunchgrass but not perennial ryegrass. The fact that the base of the stems are not purple shows that this is not a perennial ryegrass (that's a key marker for the species). Based on some random photos I've been looking at, I would guess that it's annual ryegrass, which explains its growth habit (it's trying desperately to set seed). It could also be one of a few other bunchgrass weeds, but I'll stick with what was in the seed mix you planted.

It's interesting that the annual ryegrass (if that's what the weed is) survived the winter, but my best guess is that you over-seeded (not an issue usually - it's what I do myself) and not all of the annual seeds germinated last year. This guess depends on what time of year you seeded the mix - if it was early in the year, then my guess is incorrect.

A more likely explanation is that you exposed weed seeds when working the area before putting in the lawn. This is quite common and is one of the reasons that no-till gardening has become popular (no tilling means no weed seeds exposed means less weeding over time). It's quite possible that this grass represents seeds of what was growing on the property either before the house was built or is a remnant of an earlier attempt at a lawn. Given that it's a bunchgrass, you can pull it in patches and reseed with a better mix, although I recognize that with the size of your lawn this is a daunting task.

This is just a guess, but it's a guess you can confirm or refute by looking at your grass next time it has flowers.

My guess is that the round stems are the flowering stalks. As a wind-pollinated plant, it would make sense to try to put its flowers up higher than the rest of the plant so the anthers gets more wind and the pollen travels further. I've observed in other grass species that the flowering stems are often taller and sturdier than the stems that only have leaves. I assume the flowering stems need to be sturdier to support the added weight of the taller stalk, plus the strain from having wind blowing through the inflorescence, plus the eventual weight of the seed head.

It's not unusual for grass plots to become odd mixtures of both intended and unintended species with seed blown in or spread by machinery. The root image is helpful in that it indicates no stolons or rhizomes which would narrow down the identity quite a bit. There are a number of species of coarse grass that can appear: brome, darnel, orchard grass, foxtail for example. These species often have different growth patterns and can demonstrate their presence quite forcefully. In my sandy loam area I have mostly couch or quack grass spreading by rhizomes which soldiers on through dry spells and therefore is a very desirable species, but there are odd patches of grass that grow much more rapidly forcing an immediate mowing to make it look orderly, but the mowing has no control over its presence at all. Most disappointing.

Treatment is quite challenging. In those places where the coarse grass is dense it can make sense to dig up the whole patch and allow my quack grass to invade the empty space. But in those places where it is 90% quack and only 10% invaders I just keep mowing. It all makes good compost.

Not the answer you're looking for? Browse other questions tagged lawn lawn-repair mowing or ask your own question.

2
What happens if perenial ryegrass is mowed high

9
Lawn problem - seasonal grass, thatch, or something else?
8
What is this dead light brown patch on my lawn, and how do I get rid of it?
3
How do I deal with grass seed blown into a garden bed?
5
What to do to the dry grass that is not allowing new grass to grow?
4
Caring tips for a new lawn
1
Added vinegar and dish soap to kill clover. but it killed my grass. What should I do?
9
What is the best type of grass for high-wear areas in England, and how to use?
2
What happens if perenial ryegrass is mowed high