What is this hairy caterpillar?

I have hundreds of this kinds of caterpillar in my backyard . I want to know what is this and how can I rid of them ??? 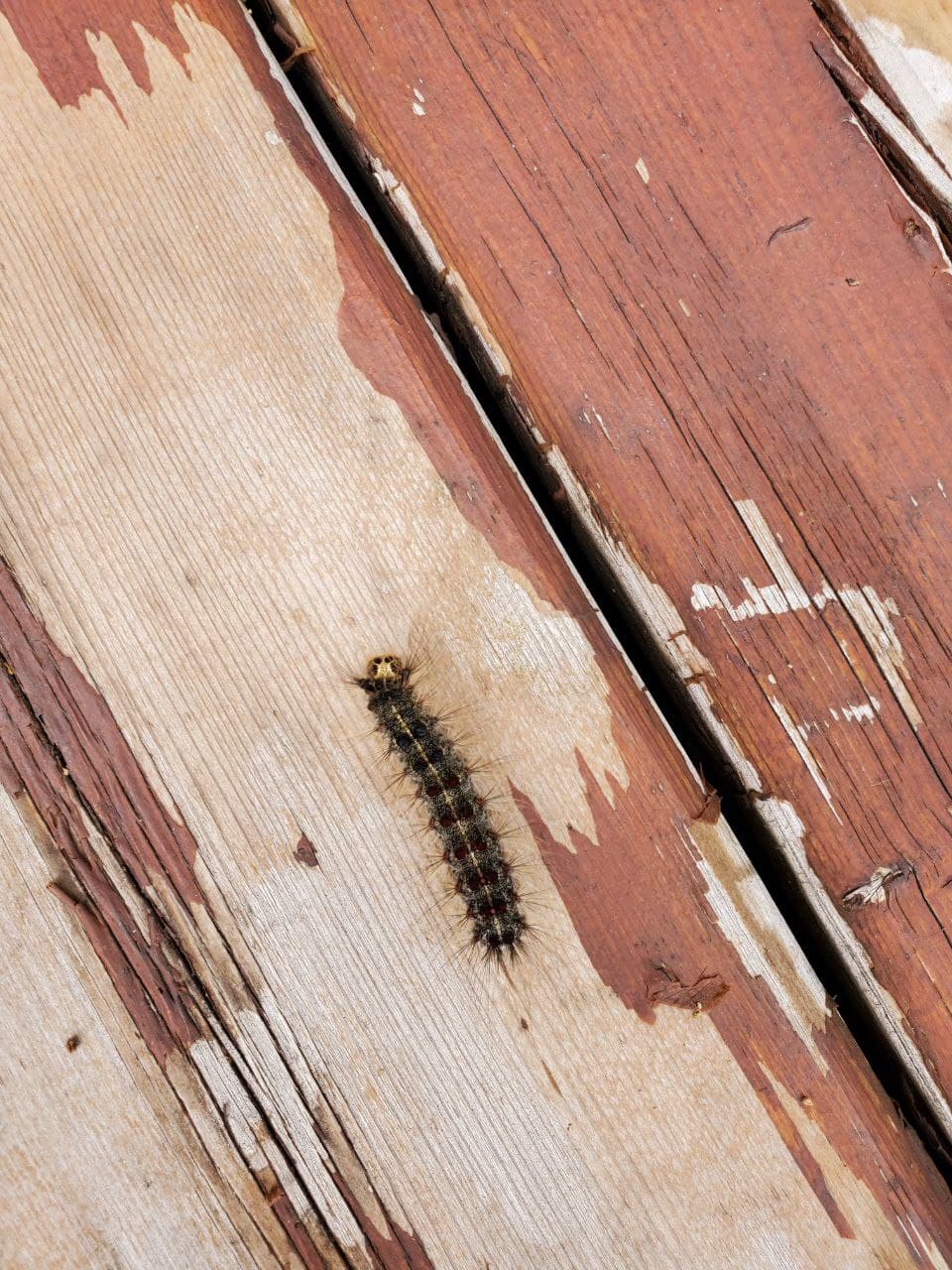 This caterpillar is close to a forest tent caterpillar. If you are anywhere near Ontario, Canada right now we have a very large population of these caterpillars defoliating apple, poplar and other tree species at this season. There are so many of them they can appear in the most unusual places.

That's a gypsy moth larva in the first instar stage, before it develops distinct red and blue spots. (Or perhaps an older larva in poor lighting.) Compare to this well-lit photo of a second or third instar gypsy moth larva: 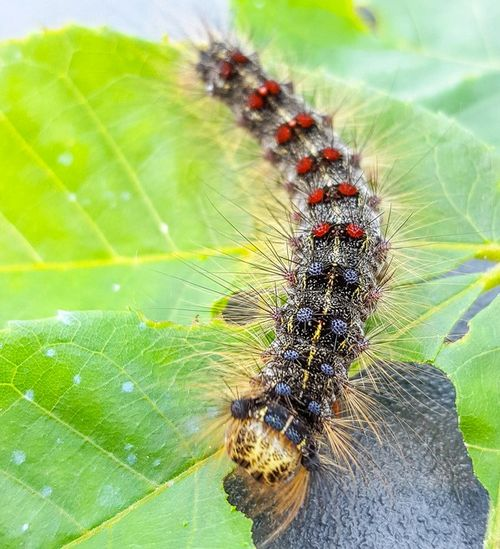 The easiest identifying characteristic is that it has 6 pairs of bright red dots on the tail end, and 5 pairs of dull blue spots on the head end. I can see hints of those colors starting to show in your photographed caterpillar.

See this comparison of gypsy moth caterpillars to look-alike species often found in the same areas:

The first instar of gypsy moth caterpillar can easily be confused with tent caterpillar, but look at the color of the head. In tent caterpillar it would be black; in gypsy moth the head is pale yellow/tan. If you don't see any caterpillars yet with the red and blue spots, check again in a week or so, after they've had a chance to molt.

The gypsy moth is a non-native pest species in North America. They are present in most areas at low numbers, but occasionally the population will spike in a certain area. A local outbreak will last for two to three years before the population drops back down to low enough levels that you'll stop noticing them. Then the trees get a break, usually anywhere from five to fifteen years, before the population spikes again.

During a gypsy moth outbreak, infested trees will be severely defoliated by the caterpillars. After the caterpillars mature into adults (anywhere from mid June to late July), the trees will have a chance to regrow their leaves. Previously healthy trees can usually survive this, although it puts a severe stress on their health.

What can you do now?

You can protect individual trees; if you have too many trees to protect them all, pick the ones that are most important to you.

Wrap your trees with a burlap barrier band, a 12-18 inch strip of burlap tied around the middle with string, with the top half folded down so it forms two layers. The caterpillars will crawl between the layers of burlap during the day to hide from predators. With them all concentrated in one area, you can easily knock them off the tree into a bucket of soapy water, where they will drown. Wear gloves, because the caterpillars have stinging hairs that can cause a skin rash. More caterpillars will come the next day, so you have to do this pretty much every day. But the more often you do it, the less damage your tree will take. Although this will be tedious, remember that you only have to do it for a few weeks a year, and only for two to three years. Once you stop seeing caterpillars in your burlap band, you can take it down (until next year). If you save the band for reuse, inspect it for egg masses before putting it in storage. 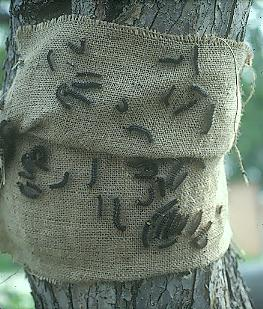 A less labor-intensive way of protecting your trees is to wrap three or four bands of duct tape, sticky side out, around the tree. Make sure not to stick the tape to the bark, because that can injure the tree. Many of the caterpillars will get stuck to the tape and die. Check on your sticky bands periodically and replace them (or add more strips above or below) when they get clogged with caterpillar corpses. Remove and discard the band sometime in July, whenever you stop seeing new caterpillars.

Another thing you can do, once fall comes, is remove any egg masses you see. Scrape them off the tree or other surface into a bucket of soapy water. Let them soak for 24-48 hours to make sure they're completely dead. A plastic scraper is better than a metal one because it's less likely to damage tree bark. An old credit card works well. This is what the egg masses look like: 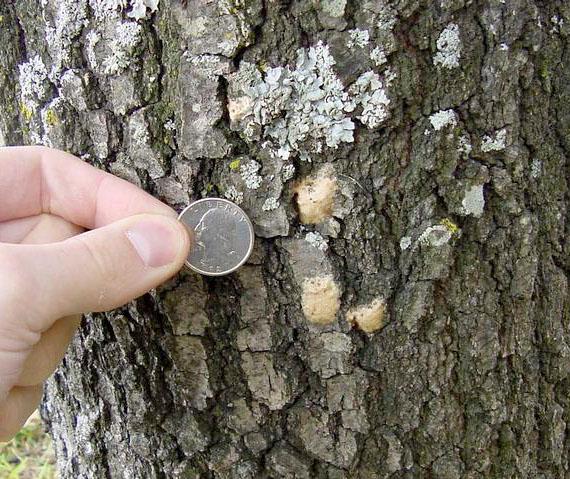 The moths usually lay their eggs on tree trunks and branches, but occasionally they will lay them on portable objects like car bumpers, firewood, lawn furniture, etc. An egg mass on a car can start a new outbreak in another area. Be vigilant; once the egg laying starts, inspect your car before driving it, and inspect any outdoor objects before transporting them to a new location.

What you can do next year:

There are some sprays and insecticides that can be used against gypsy moth, but those treatments are generally best applied earlier in the season (~May) before the gypsy moth population really gets well established. So it's something to look into for next year. Specific product availability and legality will depend on where you live. A certified arborist may be able to treat your trees with a systemic insecticide. Depending on where you live, there may also be products that you can apply without any specialized training or certification. In the US, that information should be available from your state agricultural extension service. Read the label thoroughly before using the product and follow all directions. (Seriously. Many insecticides are neurotoxins. People who apply insecticides wrong can end up with serious health problems.)

Since adult gypsy moths can fly and don't care about property boundaries, the best control programs involve controlling them throughout the infested area. Contact your town or county government or homeowners or neighborhood association and ask if they have a gypsy moth control plan. Or coordinate with your neighbors to hire a qualified service for the neighborhood.

Hope for the future

If all of the above was made you feel discouraged, I highly recommend reading up on the many ways that nature is fighting back against the gypsy moth. There are parasitic wasps that prey on their eggs. There are fungi and viruses that infect gypsy moths, either killing them or slowing them down. These factors are the reason that local populations of gypsy moths collapse after a few years, rather than continuing to expand exponentially. Over time, even more diseases and predators will adapt to the gypsy moth, it will lose its competitive advantage and become just another part of the local ecosystem.

Not the answer you're looking for? Browse other questions tagged worms or ask your own question.

18
How do I keep red wiggler worms alive overwinter in the Northeastern USA?
5
What is this leaf miner / tenter in my small bush/tree?
4
How do you attract and keep worms in your garden?
4
How deep to start my vermicomposter and how many worms to start?
3
Mass Earthworm Suicides on the Back Veranda
10
What are these long, mostly translucent worms in my potted trees?
3
Worms appearing in potted Yucca after watering
4
Need help identifying this worm
2
What kinds of larvae/maggots/worms are these?