Why are weeds growing with my new seeds? 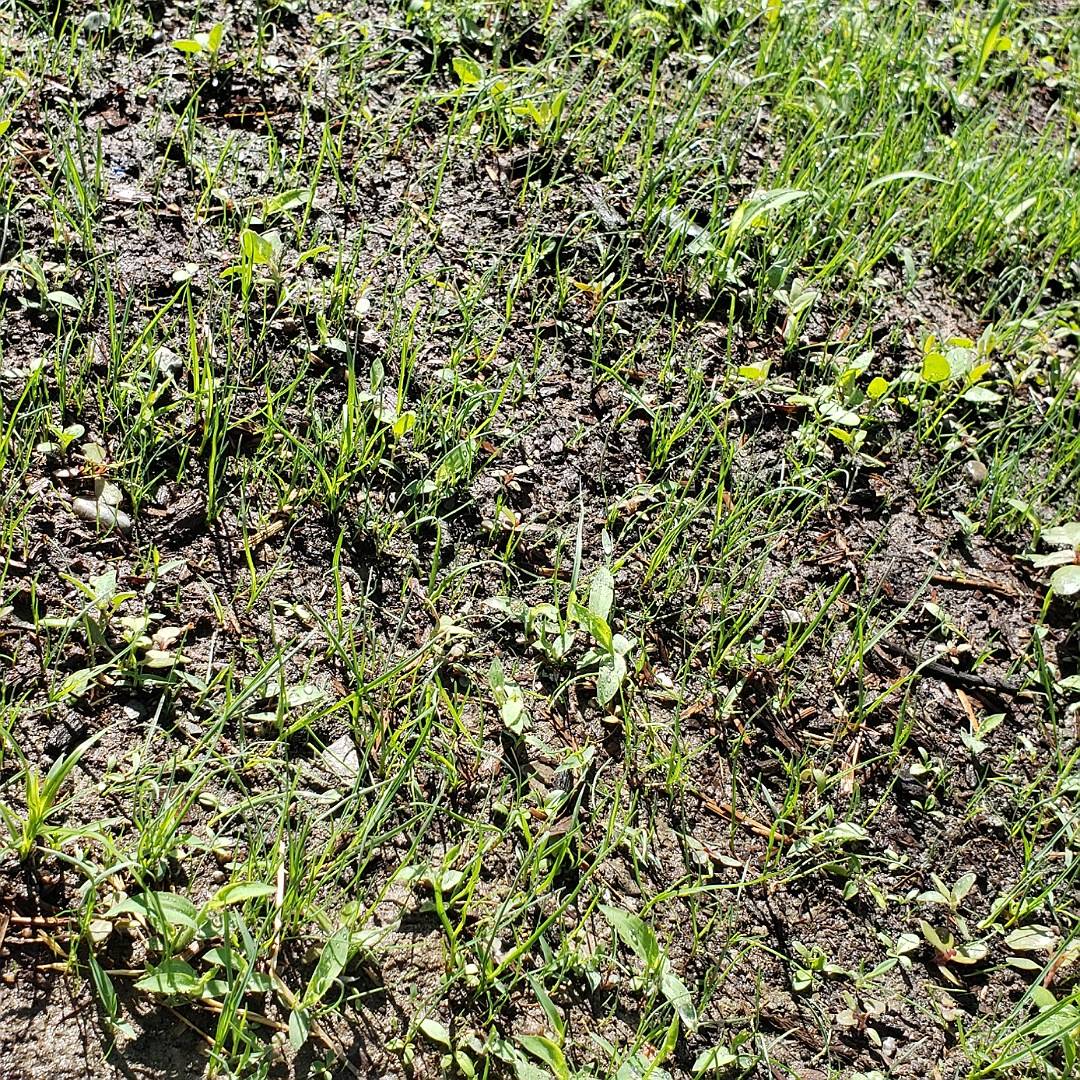 So before planting new seeds I did two applications of weed killer about 1 week apart. I thought I had gotten rid of all weeds mainly the dandelions that were growing. I was all the leaves go brown and after 1 week of the second application I picked out all the weeds.

I bought some triple mix and spread it out on the lawn and planted the new seeds along with a new seed starter fertilizer. Then I watered the lawn atleast twice a day for a couple of weeks. Now here I am with all these weeds growing with the grass and looks like they are out competing them!!!

What can I do from here and where did these weeds come from?

Weed seeds in the soil won't be affected by a contact or systemic (such as glyphosate) weedkiller that acts on green leaves. Regular mowing will get rid of some of the taller weeds. Otherwise, wait until the lawn is established then treat with a selective turf weedkiller, ie something that kills broad-leaved weeds but not grass. Follow the instructions to the letter.

I used to live near a retired professional gardener who had worked in English "stately home" gardens where lawns (acres of them) were a key feature.

One of his pieces of advice was "There are two ways to make a lawn. Either you spend six months preparing the site before you sow the seed or lay the turf, or you spend six years trying to fix the problems you caused by rushing the job."

In the OP's case, (1) prepare the site, (2) water the soil till you get a crop of weeds, (3) kill them, (4) wait for the weedkiller to degrade. Then repeat steps 1 to 4 until you have no more weeds. Important: Don't disturb the ground to bring a new crop of seeds to the surface, otherwise you will have to start again!

THEN you can think about sowing the grass seed. If you want instant gratification, astroturf is a better option :)

When purchasing grass seed (at least in the US) in bags, there will be a label that tells you the tested percentage of varieties grass and the percentage of weed seeds and noxious weed seeds. If you scoop it out of a bin, I don't know if there's a reliable way to get these stats. I've never seen a bag that said 0% weed seeds but the brand I generally use always says 0% noxious weed seeds and a low % of weed seeds. I have learned over time to look very carefully at two things: the date it was bagged and the percentage of weed seed. Note: each state determines what is considered a weed and some non-grass seed will be labelled 'other crop'. That is listed as 'other crop', IIRC. I never buy seed from a bin. It's possible those weeds came in your grass seed. If you have the bag(s) still, take a look and see (assuming you live in a place where this labelling is practiced.)

Here's a webpage that breaks down the labelling and the example image they use: 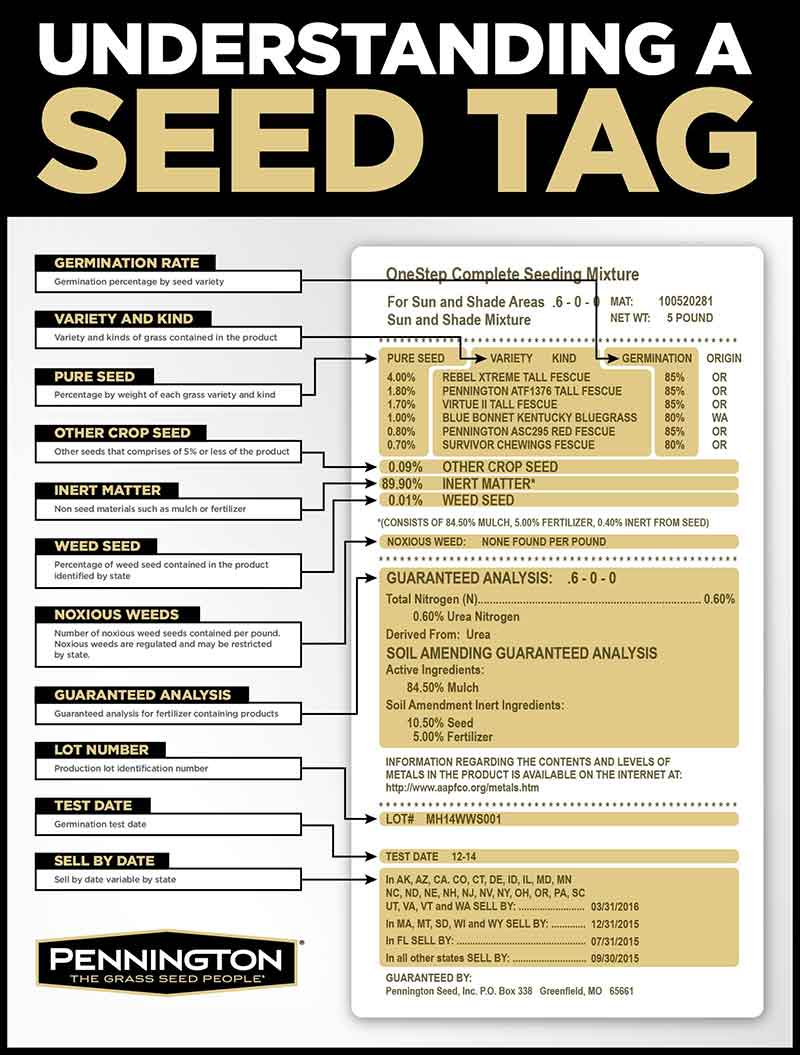 In answer to your main question: The weeds came from seeds that were in the soil and no affected by the weed-killer applied to above-ground weeds.

An organic gardener's technique for ridding soil of unsprouted seeds and under-soil propagation-capable plant segments (UPPSs): There is a method called solarization that kills occulted seeds and UPPSs and does so without requiring the use of products with "kill" in their names.

In broad strokes, the method uses the heat of the sun, assisted by water and heavy plastic sheeting, to bring about the de-commissioning of the weed seeds and UPPSs that lie in wait no matter how many above-ground weed plants you eliminate.

The following is from Dyck Arboretum of the Plains in Heston, Kansas.

It is best to use this method during the longest, hottest days of summer. The goal is to get soil temperatures under the plastic above 140 degrees. It is easier to reach these temperatures in June through August.

This is a process that will last for a couple months. Plan ahead in your planting schedule so solarization has enough time to work. Some of the more aggressive weeds will not be eliminated in just a few weeks.

In your case you might try it on a small area of your lawn this summer. If it works, you could go the whole hog later in the summer or next year.

When solarization is suggested as a means of weed control, the claim that it will be 100% effective is never made. The Dyke article says it worked in some places and not in others. I had a kind of good luck with a rough approximation of the technique. It's optional reading because my installation was idiosyncratic and might not generalize liberally. Still, it should be helpful to some. It's along the lines of "what not to do" in gardens situated like mine.

in 2014, about a year after I'd moved back to a home with a very weedy front yard, I decided to dominate the weeds once and for all. I decided I would grow trees and nothing else. I started by laying down a product called weed cloth with plans to cover it with some kind of bark or gravel and be done with weeding forever. In addition to the cloth and grossly over-priced soil "staples I bought a few sacks of ground-up tires to use instead of bark (decomposes and harbors weeds) or gravel (expensive and painful to bare feet). The tire chunks gave me the creeps because the roads that tires roll over for years are covered with all ids of oil and gasoline-related stuff and in contact with asphalt much of the time. The manufacturer said it was "safe" so I proceeded as if it were safe.

The installation did keep weeds out of my life for a few years. It began to look ratty, though, as the cloth decayed around the edges and the ratio of crypto-dog waste to tire chunk climbed and with entropy being the dogged foe of order that it is. With some courageous helpers, some large trash bags, and the promise of beer, later, I de-installed the weed barrier.

What we found beneath it: It had done more than just suppress weeds. (This is relevant: my neighborhood has clay soil. I forget to mention it at the outset.) Years of mainly dry but sometimes rainy weather minus most of the sun's light plus a moderately weighted fabric covering had produced something more challenging than clay soil: ceramic soil. The result of 5 years in a make-shift whole-yard kiln is pretty close to concrete, actually. If I wanted to dig in it now, I'd start with a hammer drill.

I'd left enough uncovered space around my trees that they were doing fine.

Since the "reveal," I've let the cast-off leaves and sheathes of my 4 or 5 Bambusa oldhammii (the clumping 60-foot true bamboo) carpet the formerly cloth-and-tire covered areas. No one has called code enforcement. I'm calling the bamboo material "mulch." There aren't very many weeds, so maybe this project, in Phase 2, is a success. Or maybe it hasn't rained since 2019.

There is a special formula of weed and feed for applying with grass seed, DO NOT use regular weed and feed! Also be sure to check compatibility with the grass seed you are planting.

Not the answer you're looking for? Browse other questions tagged lawn weeds germination or ask your own question.

6
Preparation for a new lawn to prevent weeds and encourage growth
3
Is it possible to save a lawn completely overrun with weeds? If so, how?
4
tomato seeds not growing
6
Did I use enough grass seed on my new lawn?
10
What do I do once my weeds turn brown?
2
What are these green weeds on my grass?
1
What are these weeds and how to get rid of them?
3
Re-sodding to solve weed problem without use of herbicides
1
What is the best way to de-weed a lawn?
3
Large lawn with patches full of weeds in northwest Mass