Why is this potato plant wilting?

Here is a photo of some potato plants: 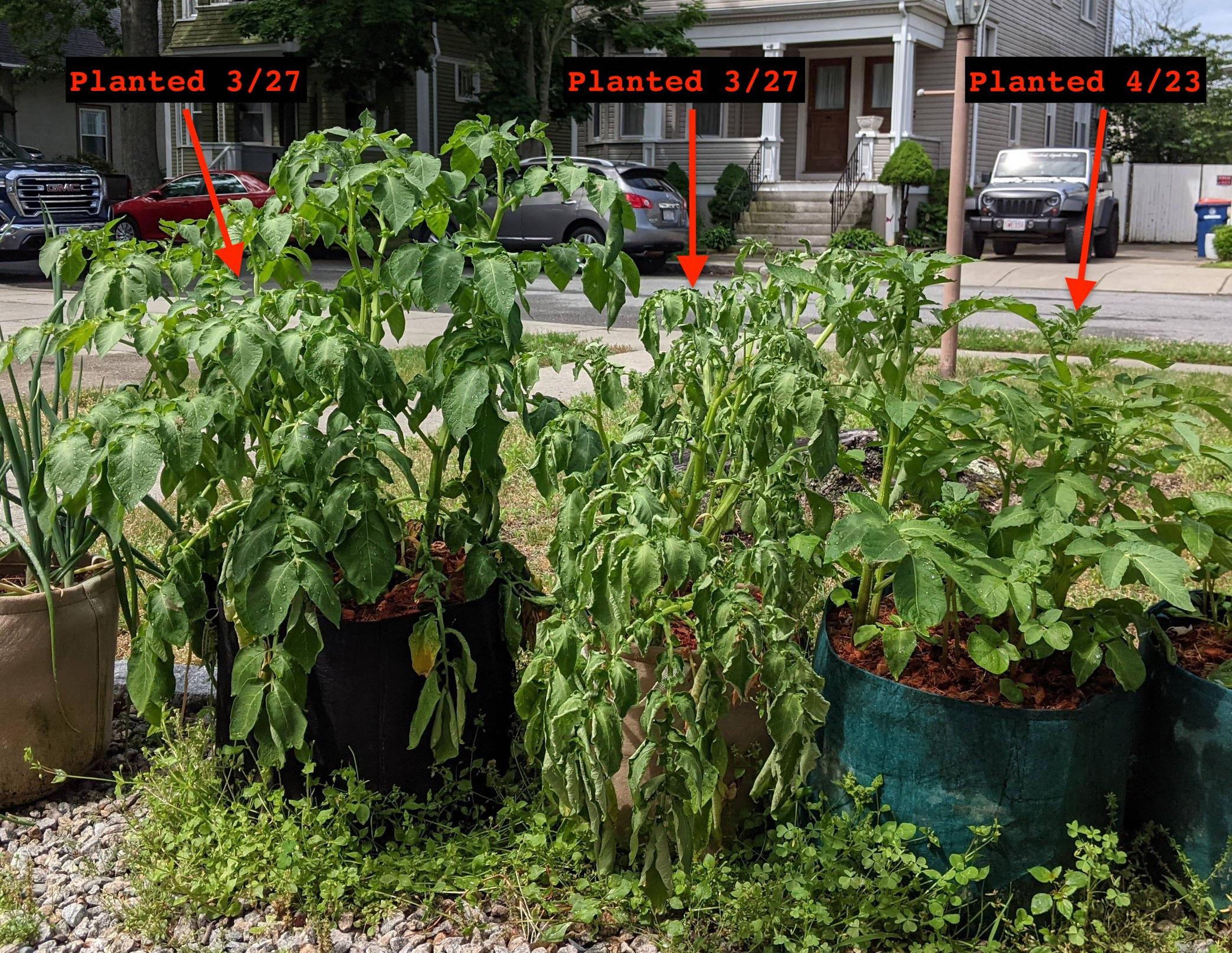 As you can see, the plants on either side are doing fine, but the plant in the middle is wilting. They're all watered at the same time, so that plant can't be thirstier than the others (and it rained overnight, anyway); it seems too early for the potatoes to be ready to harvest; it doesn't seem to have any fungus or disease (and, in any case, such a thing would probably have spread to the other plants). What could be going on here?

In case it's relevant, the two pots planted in March are unknown potato varieties (i.e. supermarket potatoes). The pot planted in April contains Pinto Gold from a seed potato dealer.

If that plant was grown from a supermarket potato, it may be infected with a virus.

Potatoes and tomatoes are susceptible to several virus diseases which reduce the yield of the crop. Some of these diseases have no visible symptoms until the crop is harvested and the yield is less than expected, but others cause leaf curl similar to your picture and other similar symptoms.

These viruses are harmless to humans and therefore not monitored in potatoes sold to be eaten (so it is perfectly safe to eat what you have grown), but potatoes grown for seed are tested both during the growing period and after harvesting to minimize transmitting the disease to the next year's crop.

The viruses can survive for several years in the soil, so don't re-use the soil from that pot to grow potatoes or tomatoes again.

Growing potatoes in pots can be a difficult business. They are frequently challenged for water, particularly if the sun can heat the side of the pot raising the temperature of the root ball. Once the roots have filled the pot they may be lucky and escape the pot through holes in the bottom and reach into the damp area under the pot, drawing moisture from a deeper volume. By rocking the pot back, check to see if the happier pot has managed to probe for water in the layer of stone that it is sitting on; if it does not want to move, then leave it as is to ensure that drawing of water continues.

Not the answer you're looking for? Browse other questions tagged plant-health potatoes or ask your own question.

8
Should I still continue to plant a potato that turned green?
4
Is this a potato plant?
5
Why are my Yukon golds wilting?
8
What is happening to our potato plants? (going black, wilting)
1
How much does a potato plant weigh?
1
What is the problem with this Arran Pilot potato plant?
1
How and when to harvest potatoes grown in an unorthodox bed?
1
Why are my potato leaf edges white?
3
Possible to grow sweet potatoes in towers?